Diagnosis. E. biocellatus   resembles E. trispinosus   , but females of E. biocellatus   are distinguished by the carapace presenting a wide brown, median longitudinal stripe, bifurcate posteriorly, and by the opisthosoma with semicircular posterior portion, anterior margin straight and not projected towards the carapace and by the posterior conical projection about half as high as the opisthosoma ( Fig. 2A View FIGURE 2 ). The epigynal plate is reduced, wider than long, with an almost inconspicuous atrium, median septum and copulatory openings are located within the atrium and presenting a large posterior fold ( Fig. 2D, E View FIGURE 2 ). The copulatory ducts contour the inner margin of the spermathecae ( Fig. 2G View FIGURE 2 ). Males of E. biocellatus   are distinguished by the yellowish-brown carapace with a dark brown, median longitudinal stripe, bifurcate posteriorly, yellowish legs, and roundish opisthosoma ( Fig. 3A, B View FIGURE 3 ). The palpus presents a RTA sinuous and very long, at least 3x longer than wide, with ventral fold S-shaped, DTA short and horn-shaped and dorsum of tibia with large setiferous tubercle, directed retrolaterally, harboring a very thick macroseta ( Fig. 3E, F View FIGURE 3 ).

Notes. Mello-Leitão (1929) cited “ Para ” as the type locality of E. biocellatus   . However, the analysis of the holotype in Simon Collection (accession number 2044b, MNHN, Figs 4A –B View FIGURE 4 ) shows that its label, handwritten by Mello-Leitão himself, clearly states " Para ou Pebas ♀ type " ( Fig. 4C View FIGURE 4 ), indicating that the specimen was collected in one of those two localities. The word " Para " or "Le Para " was a reference used by Simon and other nineteenth century collectors to refer not to the Brazilian state of Pará, but to the old name of the city of Belém: Grão Belém do Pará (e.g. Levi 1964: 72, Papavero 1973: 377, Levi 1996: 108, 142). Simon normally used the word “Prov.” or “Province” when referring to the current state of Pará (e.g. Simon 1895: 159). The other locality is Pebas, a city near the Amazon River, in the department of Loreto, Peru, near the border with Brazil. This specimen most probably was collected by Marc de Mathan, a French collector who followed the Amazon River and its tributaries, from Belém to northern Peru, reaching up to Ecuador, during the end of the 19th and the beginning of the 20th centuries ( Papavero 1971: 161). Mathan was the sole collector cited for Pebas and he also collected in “Le Para ” (e.g. Simon 1893: 310, 326; 1895: 135, 153). Unfortunately, spider samples deposited in MNHN, identified as belonging to a single species, often refer to more than one locality and may have been mixed in just one flask (R. Baptista, personal observation). Simon probably had identified three specimens as E. trispinosus   , all included under accession number 2044, although they belonged to different samples from Belém and Pebas ( Fig. 4D View FIGURE 4 ). Mello-Leitão (1929) considered these specimens as belonging to three different species and splitted this mixed sample into three log numbers: one with a male (2044) that he also identified as E. trispinosus   , agreeing with Simon ( Fig. 4D View FIGURE 4 ), another with a female of E. cornutus   (2044a, Fig. 4E View FIGURE 4 ), and the last one with the female holotype of E. biocellatus   (2044b, Figs 4A –C View FIGURE 4 ). The male identified as E. trispinosus   (2044) by Mello-Leitão is, in fact, the then undescribed male of E. biocellatus   , as many samples of the same males and females from several localities Pará suggest. The other female (2044a) actually is E. cornutus   , but Mello-Leitão committed a lapsus while copying the label, including only " Para," without referring to "Pebas". In MNHN, there is a single female specimen of E. biocellatus   (2044b), indicating that the species description was not based on a type series, but on a single specimen collected either in Pará or Pebas. The male of E. biocellatus   (2044) included in the same flask was not described by Mello-Leitão, since this author mistakenly attributed it to E. trispinosus   .

We assume that the true locality of the species is actually Belém, since many specimens were collected in this locality and surrounding areas of Pará and Maranhão states, both in Brazil. In addition, no specimens of E. biocellatus   from western Amazon, a region where Pebas is located, were found in the collections examined. Conversely, the female of E. cornutus   (2044a) is most probably the specimen that was originally collected in Pebas, since no sample of this species has been collected in Pará or other areas of eastern Amazon, and there are several records from western Amazon, surrounding the Peru locality, i. e., Ecuador and the Brazilian states of Amazonas and Acre.

Epigynum ( Figs 2D, E View FIGURE 2 ) slightly wider than long, with septum and copulatory openings located within atrium, separating it into two parts, and a large flattened posterior area, about 1.5x longer than atrium. Epigynum small, occupying a much smaller area than the one occupied by internal genitalia. Atrium reniform, very wide, approximately 3x wider than long, very shallow, almost inconspicuous, delimited by a light marginal depression, strongly demarcated on anterior margin and inconspicuous on most of posterior margin. Median septum almost as wide as long, placed almost entirely inside and fused to median area of atrium, which is restricted to only two free lateral areas. Anterior base of septum entirely within atrium and slightly larger than posterior base, which is located just below atrium. Copulatory openings clearly visible, located in depressions at each side of median portion of septum. Vulva ( Fig. 2F, G View FIGURE 2 ) with short ventral ducts, connected posteriorly to copulatory openings and anteriorly to internal posterior edge of large reniform anterior curve, which is very expanded. From external posterior angle of anterior curve, a long duct originates, directed internally at its initial portion, after which there is a closed curve, directed ventrally and contouring internal margin of spermatheca, reaching down close to ventral surface. A 90o curve follows, directed posteriorly, forming a long and almost straight path, clearly visible by transparency ( Fig. 2D View FIGURE 2 ), and reaching back to near epigastric furrow, then an abrupt and long curve directed dorsally occurs, followed by another one directed anteriorly, originating a short straight path and a curve directed externally, which finally connects to internal posterior margin of large and roundish spermatheca.

Palpus ( Figs 3 D –H View FIGURE 3 ). Tegulum with transversal furrow in 3 o’clock position. Embolus basis gradually separating from tegulum, initially forming a wide stripe, that tapers up to filiform apex, describing about 3/4 of a turn around lateral margin of tegulum, and with apex located on a furrow placed on prolateral margin glabrous apical area of cymbium. RTA fused to DTA, both connected directly to tibia and not constricted at base. Short Vshaped notch between RTA and DTA. RTA wide and very elongated, about 3x longer than wide, with curved lateral margins, arranged transversally to longitudinal axis of cymbium, large median concavity, wide marginal folds, and rounded apex thinner than its median portion. RTA with longitudinal axis very slanted downward and also projecting retrolaterally, especially at its distal half. Its dorsal fold describes a long and convex curve and projects over median concavity, forming a deep marginal trough. Ventral fold describes a S-shaped curve, with concave distal portion and convex basal portion, projected over median depression only at basal area, where it extends dorsally and fuses to common base RTA + DTA, forming a deep basal pouch around DTA and dorsal fold of RTA. Basal pouch conspicuous in ventral view and with evident grooves, numerous and close to each other along its length, which give a striated aspect to surface. DTA very short, horn shaped, a little blunt, with slightly thicker base. Dorsum of tibia with large setal tubercle, surmounted by a very strong spiniform macroseta, inclined retrolaterally.

Distribution. Only know from eastern Amazon, from the Brazilian states of Pará and Maranhão ( Fig. 15 View FIGURE 15 ). 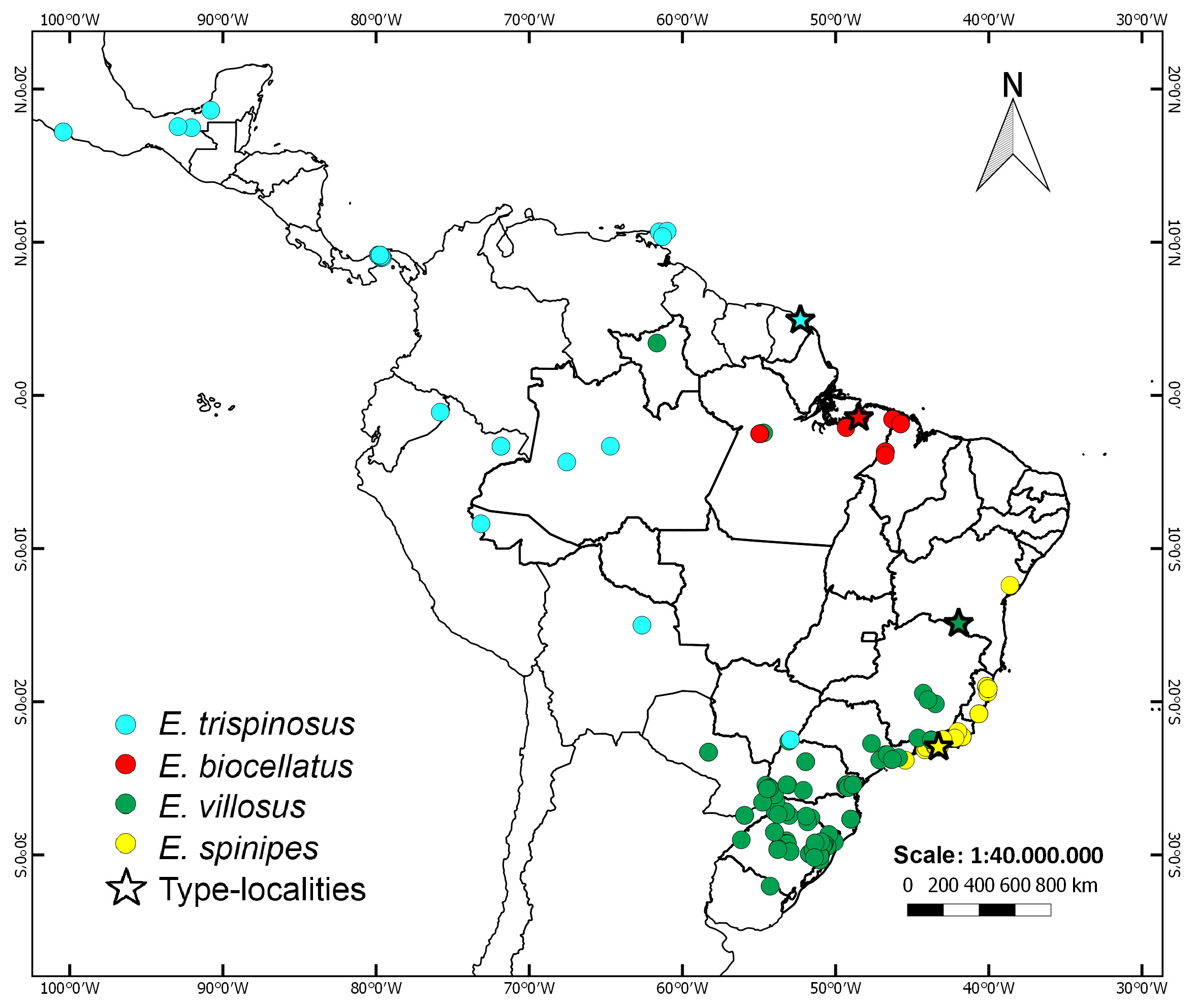 FIGURE 15. Geographic distribution records of Epicadinus, highlighting the type-locality of each of the four species (star symbols).