Diagnosis. Pseudorphnus hiboni  is easily recognized by its large size: the body is longer than 11.0 mm, whereas the specimens of the other species are mostly shorter than 10.5 mm. It also differs in having the relatively slender horns in either sides of the excavation near the anterior margin of the pronotum in males, finger-shaped apices of the parameres, and the base of the elytra bordered and densely punctate with punctures similar to those in the striae and forming a “tile” pattern.

Elytra convex, with feebly marked humeral humps. Maximum width approximately at the middle. Elytra with 7 distinct striae on disc. Striae with characteristic, narrow, semicircular punctures. Each puncture with a short, yellow seta. Only sutural stria reaches elytral apex. Striae 2–5 about 2/3 length of elytron, striae 6–7 about 1/3–1/4 length of elytron and do not reach elytral base. Epipleura with long, sparse, brown setae. Base of elytra bordered and densely punctate with punctures similar to those in striae and forming a “tile” pattern ( Fig. 7View FIGURE 7 E).

Protibiae of typical shape of Pseudorphnus  , with 2 strong outer teeth and a small 1 located basally. Lateral margin basad of outer teeth not crenulate. Apices with 3 robust, spur-like setae and a number of smaller setae. Protarsi well developed, about 4/5 length of protibiae. Claws 1/3 length of apical tarsomere. Apical protarsomere as long as tarsomeres 3 and 4 combined, as thick as other tarsomeres. Ventral surface of protibiae smooth with 2 rows of setae along sides and sparse longer setae in the middle. Ventral surface of femora sparsely punctate, with 1 raised longitudinal line.

Mesothoracic and metathoracic legs similar in shape; metafemora and metatibiae about 1/8 longer than mesofemora and mesotibiae. Mesotibiae and metatibiae somewhat triangular, with 2 apical spurs, with inner margin only slightly concave and with 1 transverse keel. Longer tibial spur as long as 2 basal tarsomeres. Claws 1/ 3 length of apical tarsomere. Femora almost impunctate, with 2 rows of long setae.

Female. The female ( Fig. 7View FIGURE 7 F) differs from the male in having rugose surface of the head, pronotum slightly impressed anteriorly with sparse punctures in the middle, absence of the frontoclypeal horn or tubercle, presence of the distinct spur of protibiae, and absence of the pronotal excavations and ridges. The sexes are similar in general body shape and color.

Variation. All examined male specimens had well-developed prothoracic ridges and frontoclypeal horns, thus showing a relatively low allometric variability. Sculpture of the elytra varies with some specimens having no distinct rows of the punctures on the elytra, except for the first (sutural) stria. Body length of the examined specimens varied from 11.0 to 12.5 mm (males) and from 11.0 to 13.0 mm (females).

Distribution and habitat. The species was described from Tôlanaro (formerly Fort Dauphin) in southern Madagascar. All the other findings were made in a few localities in the Ranomafana National Park ( Fig. 7View FIGURE 7 H). The park is situated in Fianarantsoa Province, about 100 km west of the Indian Ocean on the east-facing escarpment of Madagascar's central high plateau and covers about 43 0 0 0 ha of tropical wet forest with elevations varying from 374– 400 m. Some of the examined specimens of P. hiboni  were captured by pitfall traps baited with fish and chicken intestine or dung and exposed for approximately 45 hours including two nights (Heidi Viljanen, personal communication). Short-time exposures of the traps suggest that the beetles were attracted to the carrion rather than accidental captures. 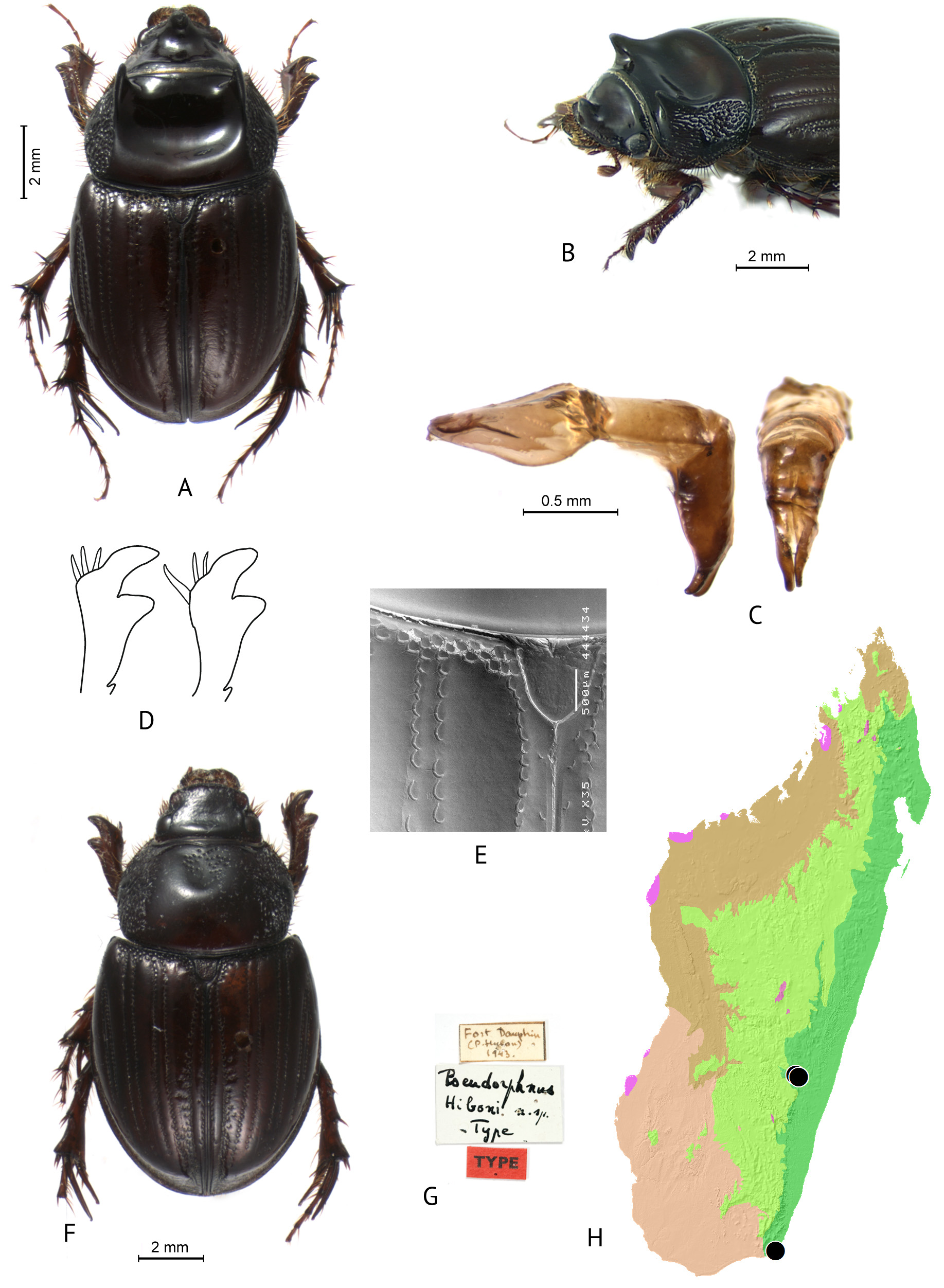