A total of 37 tick species were allegedly found on Didelphimorphia . Most tick species were occasionally found on these types of hosts, apart from some doubtful diagnoses such as those of A. dissimile on Monodelphis and Didelphis by Botelho et al. (2002), vague reports on marsupial infestation like that for A. tigrinum in Paraguay by Massi Pallarés and Benítez Usher (1982) or South American records of A. pseudoconcolor on Philander sp. in Guglielmone et al. (2003 a).

Ticks found on Didelphimorphia are mostly Ixodes and to a lesser extent Amblyomma . Records from the Neotropical region with known tick stages found on South American marsupials total 239 for Ixodes versus 46 for Amblyomma . The difference in usage of Didelphimorphia as hosts for these genera is further enhanced because the total records for all species of Amblyomma for the whole Neotropical Region is 6947, while the corresponding number for all Ixodes is 1127. In other words, 21.2 % and 0.7 % of all records of Ixodes and Amblyomma , respectively, established in South America (exclusively or non-exclusively) are for infestation on Didelphimorphia and this difference is statistically significant (P <0.001, chi-square distribution).

Several species of Amblyomma were detected on Didelphimorphia , but with one exception, none of them appear to be strongly bound to these hosts. A total of 15 records correspond to the Neotropical and Nearctic A. cajennense ; however, this represents a minimum of the approximately 1435 Neotropical records for this species. The same applies for the five records of A. aureolatum (a tick with an ample South American distribution) because total records for this species are 237. The only exception may apply to A. fuscum because there are six records of sub-adult ticks of this species on D. aurita (Barros-Battesti et al. 2005; Martins et al. 2010; Sabatini et al. 2010).

The situation is quite different for Ixodes . A total of 12 species were determined on didelphimorph marsupials, but records of I. affinis , I. aragaoi , I. boliviensis , I. fuscipes , I. lasallei , I. pararicinus and I. rubidus do not seem to have ecological relevance, while the alleged record of I. longiscutatus is probably the result of an erroneous identification. Nevertheless, Didelphimorphia are important hosts for I. amarali , I. loricatus , I. luciae and I. venezuelensis .

Ixodes amarali has been recorded on six occasions on Didelphidae belonging to Didelphinae ; four of them were adult ticks collected (one record included larvae and nymphs of I. amarali ) from M. domestica (Marmosini Hershkovitz) , while the remaining records corresponded to adult ticks from D. albiventris and D. cf. aurita ( Didelphini Gray). These few findings of I. amarali are considered of ecological relevance because they represent the majority of records for adult I. amarali . All records of I. amarali , including those records different to Didelphidae , are from Brazil, more specifically from eastern Brazil ( Figure 1 View FIGURE 1 ).

The records of I. loricatus and I. luciae on Didelphimorphia are numerous and they represent the majority of all records for both species. Hosts of the different tribes and species of Didelphidae for the different combination of parasitic stages of I. loricatus (including records form Argentina, Brazil, Paraguay and Uruguay) and I. luciae are shown in Tables 1 View TABLE 1 and 2 View TABLE 2 , respectively. Caluromys Allen has been found infested only twice with I. luciae ; the contribution of Metachirini Hershkovitz was also minimal with just one record for I. luciae , while representatives of Thylamyini Hershkovitz have been found infested four times with I. luciae .

Therefore, most records were from species belonging to the tribes Didelphini and Marmosini. The great majority of I. loricatus and I. luciae adults were found on Didelphini , but the situation is different for subadult ticks. Table 1 View TABLE 1 shows that 30 records of I. loricatus on Didelphimorphia involved larval and/or nymphal ticks, of which 24 (80 %) were determined on Didelphini . Table 2 View TABLE 2 shows 27 records of subadult I. luciae on Didelphimorphia , 21 of which (78 %) were from Marmosini. It appears that species belonging to Didelphini are the most important hosts for all parasitic stages of I. loricatus , while I. luciae appears to depend on Didelphini for adult maintenance and Marmosini to feed subadult tick. However, this should be considered a general statement because records are few, no information was obtained about densities of hosts and ticks, and the probability of trapping bias which was not considered for the analysis.

Literature on I. loricatus infesting Didelphimorphia shows a wide distribution range that includes Argentina, Uruguay, Paraguay, Brazil, Venezuela, Panama, while the record form Colombia is first record for this species. This range is augmented considering the records in Guatemala on a “wild host” by Monroy Lefebre and Cejas González (1988) and on A. geoffroyi in México by Keirans (1982, 1985). The southernmost record of I. loricatus is from an unknown host in Tierra del Fuego ( Argentina) (Neumann 1901).

However, the only record each of I. loricatus from Panama and Colombia are known now to be the result of misidentification. Moreover, all records of this species from Venezuela have to be considered cautiously because Vogelsang and Cordero (1940) do not specify tick stages found on hosts and provide no clue how the diagnoses was obtained, while Jones et al. (1972) treat as tentative their records on Didelphidae , bringing doubts about the presence of I. loricatus in the country. The same condition applies to the record on “wild hosts” for Guatemala and conversely for the Mexican record on a monkey. Finally the record from Tierra del Fuego is also unconvincing because I. loricatus has not been found again south of 35 ºS where Didelphimorphia is absent (see discussion section for further details). In brief, bona fide records of I. loricatus encompass Uruguay, Argentina, Paraguay and Brazil, most of them in eastern South America. The southernmost confirmed record for this tick is in La Balandra (34 º 56´S 57 º 42´W), province of Buenos Aires, Argentina (Nava et al., 2004), while the northernmost record lies in the Reserva Ecológica de Gurjaú (08º 14´S 35 º00´W) in the State of Pernambuco, Brazil (Botelho et al. 2004) (see the note above in I. loricatus for not considering Curralinho (01º 43´S 49 º 43´W) as the northernmost record of this species). Figure 2 View FIGURE 2 shows the distribution of I. loricatus with indication of wrong and doubtful records.

* All references to Monodelphis brevicaudata have to be considered cautiously because considerable controversy exists about it and related species.

The distribution of I. luciae is also wide, including Argentina (north-west), Bolivia, Peru, Brazil, French Guiana, Surinam, Trinidad-Tobago, Venezuela, Panama, Guatemala, Belize and Mexico for records on Didelphimorphia . This distribution is augmented if Colombia (Wells et al. 1981), Costa Rica, Ecuador (Guglielmone et al. 2003 b), Nicaragua (Jones et al. 1972) and Honduras (Onofrio 2002), all from undetermined hosts and unknown tick stages, are included in its range. However, the alleged southernmost record of I. luciae in Buenos Aires province, Argentina, by Ivancovich and Luciani (1992) is in error (see the note above in I. luciae and the discussion section for details). Figure 3 View FIGURE 3 shows the distribution of I. luciae .

The monotypic order Microbiotheridae is peculiar because D. gliroides is infested by I. neuquenensis in southwestern Argentina and southern Chile in coincidence with the range of the hosts. The records are not numerous but all of them were from this host. Therefore, I. neuquenensis is the only species exclusively found on a South American marsupial.

Finally, Paucituberculata does not appear to be important hosts for Ixodidae because there is just one record for I. jonesae for this type of host. Nevertheless, this may also be a consequence of inadequate tick searching. 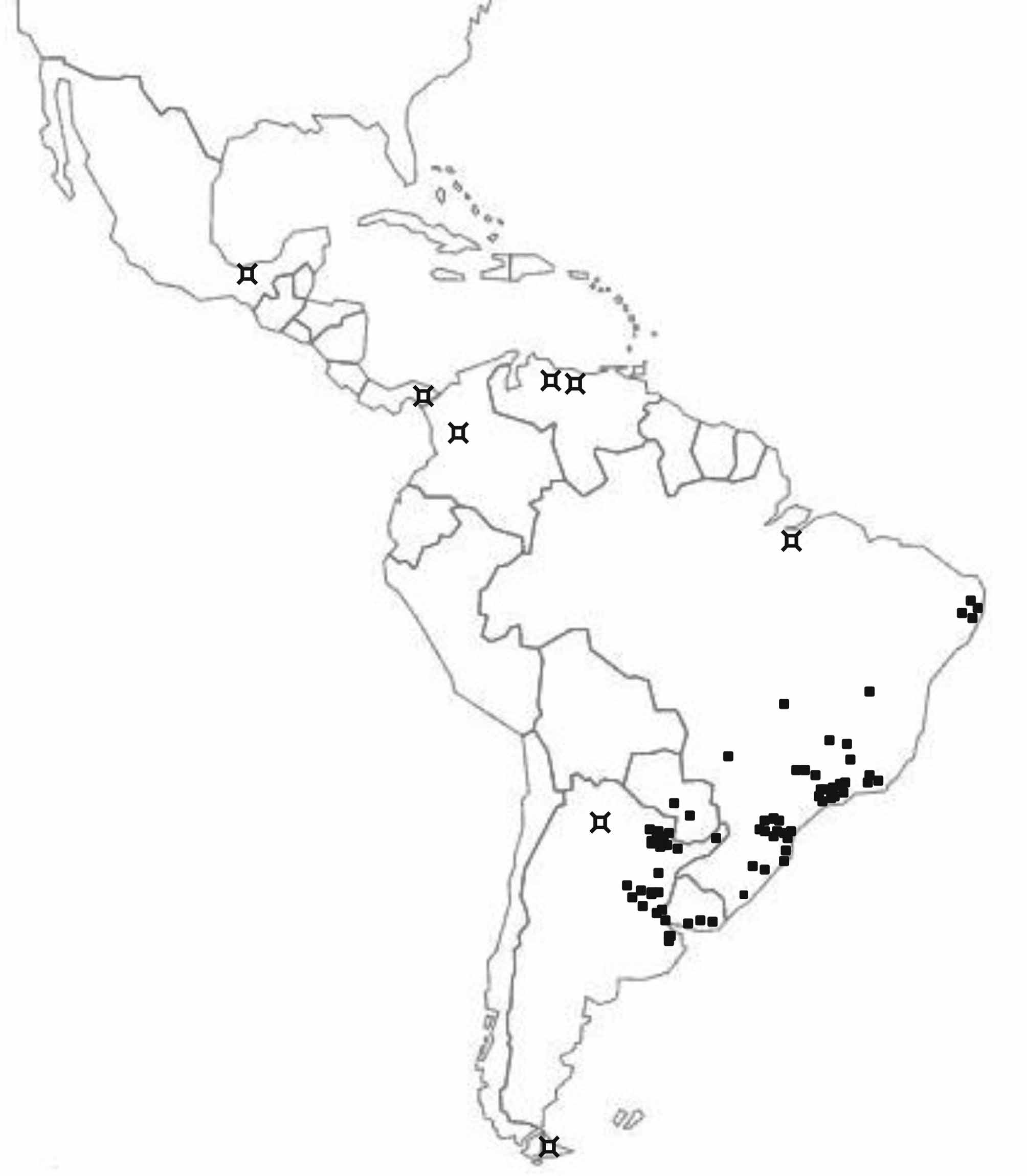 TABLE 1. Records of Ixodes loricatus and their parasitic stages found on Didelphimorphia of the family Didelphidae from bona fide records in Argentina, Brazil, Uruguay and Paraguay, L = larva, N = nymph, A = adult.