Etymology. The word watu  , a noun in apposition, is derived from the dialect of the Borún indigenous people and is a reference to the Doce River ( Costa-Reis & Genovez 2013). In 2015, the Doce River experienced the worst environmental disaster that ever took place in Brazil, the collapse of a mining tailings dam owned by Samarco (and co-owned by the Brazilian Vale and Australian BHP Billiton). The catastrophic dam failure released around 60 million cubic meters of iron ore tailings (toxic slurry) directly into the Doce River watershed, killing 20 people and affecting biodiversity across hundreds of kilometers around the river drainage, riparian lands, and the Atlantic coast, in addition to a severe contamination of the soil and water table within the affected region. The epithet is a tribute to the resistance of the Borún people and to the Watu (Doce River) in southeastern Brazil.

Advertisement call. Description based on 129 calls recorded from two males ( Table 3). The call ( Fig. 6hView FIGURE 6) consists of single, pulsed notes given at a rate of 124–275 per minute. Note duration varies from 27–70 ms. Rise time varies from 37–80% of note duration. Notes are formed by 2–7 partly fused pulses emitted at a rate of 57–153 per second. The dominant frequency coincides with the fundamental harmonic at 495–1098 Hz. Notes have no frequency modulation or a modest frequency upsweep throughout their duration, varying from 0–560 Hz.

Habitat and natural history. At the type locality, Leptodactylus watu  was found calling during the rainy season in the region from late October to late February. Calling is strongly associated with rainy days or few days after heavy pours. Males were found calling around flooded areas or close to moist ground in both open areas (transitional marshlands between the forest and lakes) and inside the forest. All calling males were hidden either under dense vegetation, ground leaf litter or inside underground chambers. They were never found calling in pastures. The congeneric species found calling in syntopy with L. watu  were L. fuscus  , L. latrans  , and L. labyrinthicus  .

Distribution. Leptodactylus watu  is only known from two localities in a region characterized by lowland interior Atlantic forests associated with the upper-middle Doce River drainage, in the Brazilian state of Minas Gerais ( Fig. 1View FIGURE 1): (1) the type locality, at Parque Estadual do Rio Doce, and (2) Santa Bárbara do Leste, approximately 70 km southeast from the type locality. 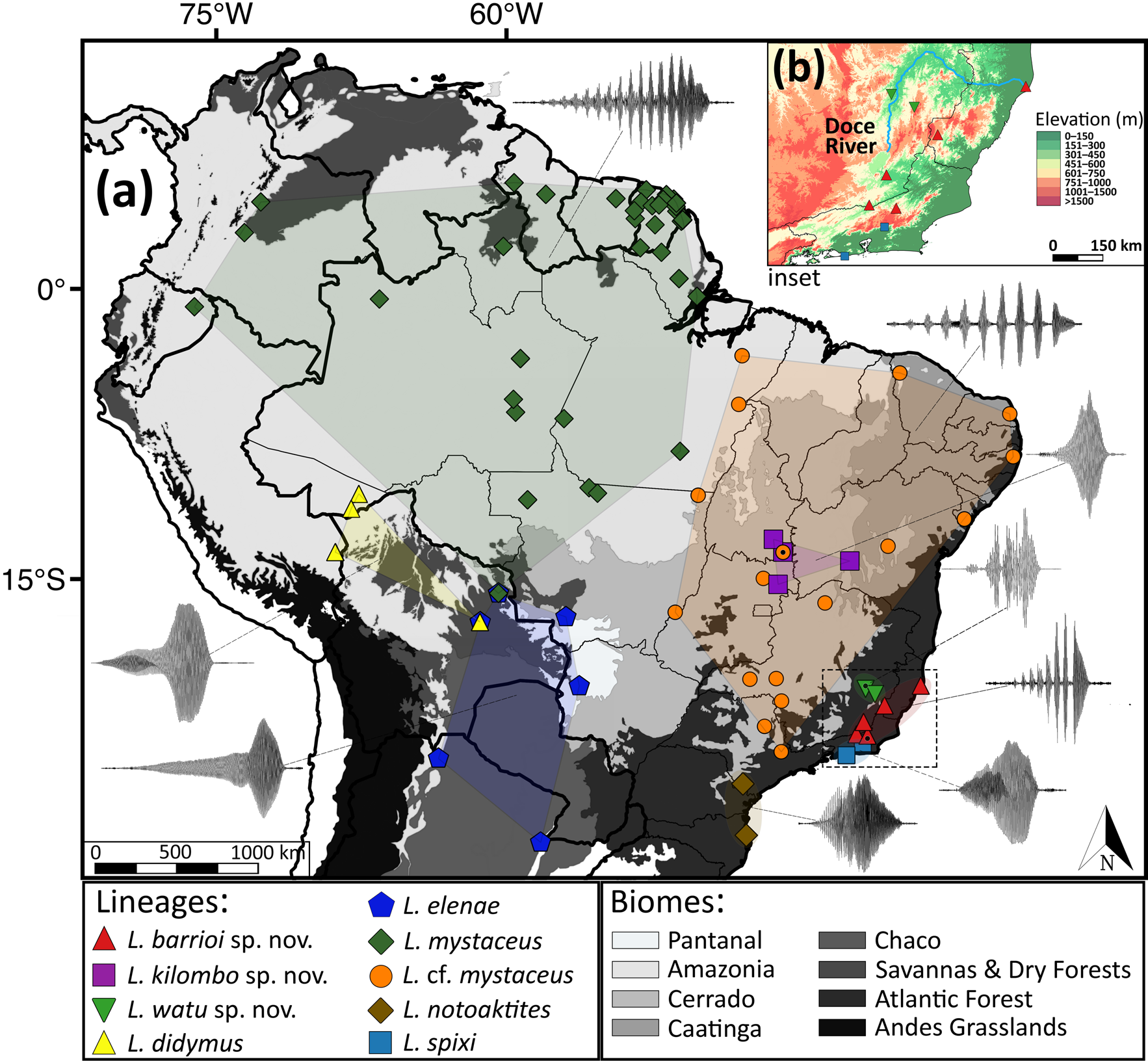 FIGURE 4. Character states of morphological and chromatic features between members of the Leptodactylus mystaceus complex and congeners of the L. fuscus group. Dorsal and dorsolateral folds: (a) one pair of dorsolateral folds in L. watu (UFMG 21332); (b) one pair of dorsolateral and two pairs of dorsal folds in L. fuscus (UFVF 0002). Longitudinal stripe on the posterior surface of thigh: (c) present in L. watu (UFMG 21332); (d) absent in L. mystacinus (UFVF 003). Tubercles on the sole of foot: (e) non-obvious tubercles in L. barrioi (AAG-UFU 502); (f) prominent tubercles covering the sole of foot in L. mystaceus (CHUFPB 30411). 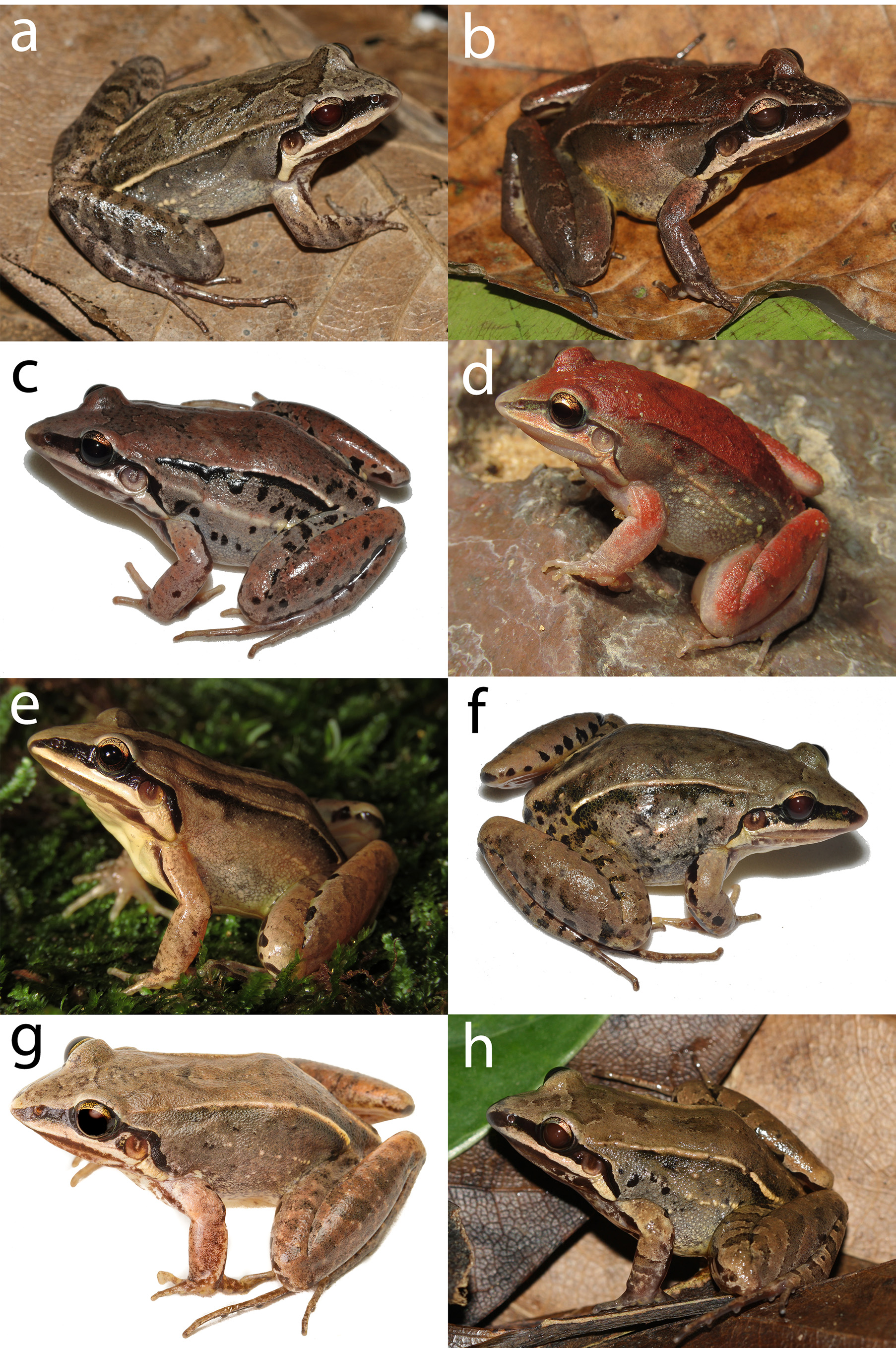