Worker description: Light ferruginous; mandibles and tarsi darker. Integument finely and indistinctly shagreened, opaque. Pilosity: short bristly hairs recurved or hook-shaped; all hairs shorter than maximum depth of fore femora except hairs on clypeus which are longer and straight; gastric tergum with both longer curved and shorter hook-like hairs; tarsi with straight and subdecumbent hairs. Pubescence confined to the tips of antennal scapes, funiculi, sides and flexor face of tibiae, and all tarsomeres.

Head in full face view ( Fig. 15View FIGURES 15 – 18), a little longer than broad (DCI average 90; 88–94). Outer border of mandible feebly sinuous; masticatory margin with two apical and uniform smaller seven teeth. Clypeus median apron with a tubercle near the frontal lobe base. Frontal area deeply impressed. Frontal lobe semicircular, moderately expanded (FLI average 65; 62–67), with free border crenulate, and anteriorly notched between its insertion and a prominent antero-lateral tooth. Frontal carinae moderately diverging caudad, reaching the antennal scrobe posterior end in a small tooth at the posterior margin of head; preocular carina fading out halfway between posterior orbit of eye and tip of antennal scrobe, posteriorly ending in the posterior margin of head as one tubercle, larger than the frontal carinae projections. Supraocular tumulus blunt, microscopically spinous, the head gradually constricted behind the supraocular tumulus, in full-face view. Posterior margin of head flanked by a series of tubercles, continuing forwards to vertex, where it bifurcates and each branch reaches the frontal carinae at the level of the superior eyes orbit. Inferior corner of occiput, in side view, bluntly dentate. Eye faintly surpassing the lateral border of head, with about 13 facets across the greatest diameter. Antennal scape not conspicuously projecting beyond the scrobe when fully lodged, gradually thickened towards apex, its dorsal and anterior face rough by virtue of the minute piligerous tubercles covering.

Mesosoma ( Figs. 16, 17View FIGURES 15 – 18). Pronotum dorsum laterally marginate but without distinct transverse carina on the anterior border; inferior margin weakly crenulate; antero-inferior corner with an often apically rounded tooth; paired median teeth absent or represented by a pair of minute widely spaced denticles, which do not differ from other sparse denticles on the pronotum surface; lateral spines much longer than mesonotal projections. Mesonotum with the first and second pair of spines represented by low, multidentate tumescences or ridges that circumscribe a more or less flattened to slightly excavate mesonotal shield; third pair as minute tubercles. Anterior border of katepisternum sharply marginate, with a strong and flattened triangular tooth at its upper third. Metanotal constriction deeply impressed in profile. Basal face of propodeum with a bi or tridentate longitudinal ridge on each side, followed by one to several isolated denticles in front of the bases of the short propodeal spines, which usually bear a subapical accessory tooth; propodeal spines shorter than the distance between their inner bases. Hind femora a little longer than mesosoma length.

Waist and gaster ( Figs. 16–18View FIGURES 15 – 18). Dorsum of petiolar node with a bigger anterior pair of teeth or two rows of simple teeth pairs; sternum with a sharp sagital keel; the sides smoothly convex in dorsal view, with minute piligerous tubercles. Postpetiole broader than long, dorsally flat, its posterior border distinctly concave. Gaster, seem from above, subtrapezoidal, little broader behind than in front. Tergum I with the shallowly excavate lateral faces separated from the dorsal surface by strong denticulate longitudinal keels, which fade before reaching the posterior end of the tergite. Between these lateral keels there is another pair of medial longitudinal keels, which divide the dorsum into three longitudinal shallowly excavate furrows, the lateral ones bear piligerous tubercles. Sternum I with a vestigial sagital keel anteriorly.

Etymology: We found the Latinized greek name ixyodus  in Kempf ´s notes for the samples we describe here, ιξψσ, meaning “side,” and οδδ, “triangle,” in reference to the triangular spine on the anterior margin of the katepisternum.

Comments: This species is easily recognized by the large plate-like triangular tooth projecting from the upper corner of the sharply marginate anterior border of the katepisternum, pronotal spines much longer than mesonotal projections, mid-pronotal projections absent, and by the lack of a well-formed supraocular tumulus.

The Brazilian specimens from the vicinity of Manaus are slightly larger than other specimens, and lack the reddish hues in the integument; the Suriname series has infuscated antennal scrobes; the vertical furrow, disc of mesonotal shield, longitudinal furrows and sides of tergum I of gaster are masked by an overlying film of a material which renders the integument uniform in color ( Pseudonocardia  bacteria? see Currie et al., 1999). These specimens have also the tubercles in front of antennal socket on the median apron of clypeus much larger, upright, almost spine-like; the dorsal disc of pronotum lacks the median pair of teeth, and the mesonotal armature is also likewise low, appearing in dorsal view as depressed spines, the anterior pair pointing laterad, and the posterior pair pointing backwards. Finally, the dorsal armature of the petiolar node consists of two pairs of simple denticles widely separated from each other. Still, they belong to the same species, as shown by the strong tooth on katepisternum, and the main distinguishing characters of the species already referred to above. 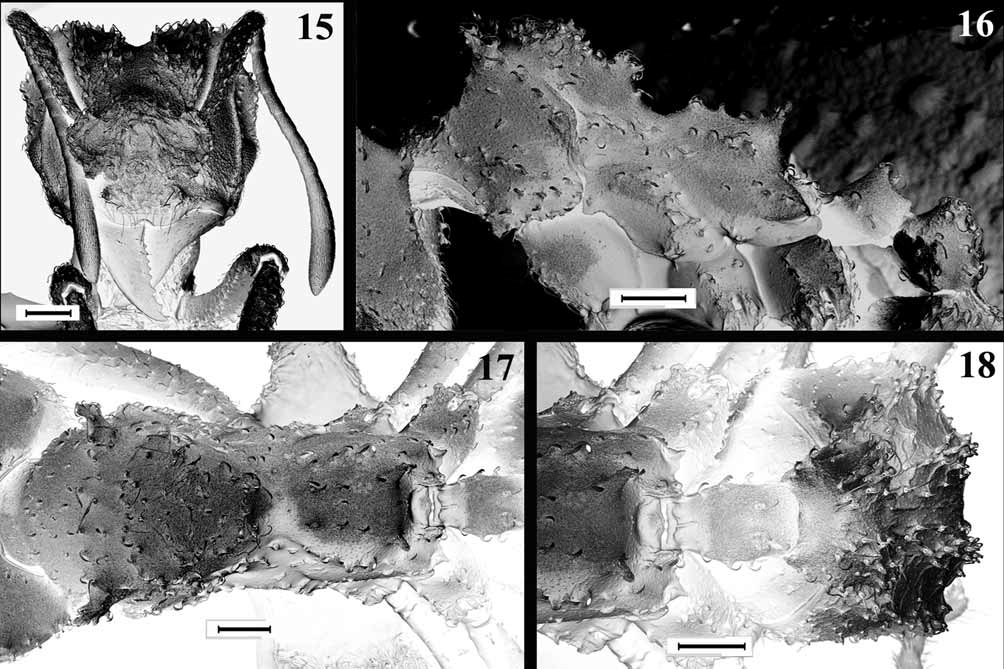