Descriptive notes. Head-body ¢. 48-49 mm, tail 27-40 mm, ear 11-15 mm, hindfoot 6-9 mm, forearm 32-37- 9 mm; weight 4-7 g. Males are significantly smaller than females in some external and cranial measurements. Size of the Yuma Myotis is clinal from small in the south-western part of the distribution (Sonora and southern Baja Peninsula) to large in north-eastern Utah and north-western Colorado. Fur is short (dorsal fur 5-6 mm) and woolly. Dorsal hairs are bicolored, with dark brown bases and gray to cinnamon-brown or pale tan tips. Ventral hairs are paler, with dark brown bases and whitish to buffy tips. Color varies geographically, tending to be light in arid parts of the distribution and darker in forested areas. Color is dull brown in central part of the distribution, dark brown in the north-west, pale in the south-west, and dark brown in the Mexican highlands. Ears are comparatively short and extend beyond nares when laid forward. Tragus is slim and straight, with bluntly rounded tip, and basal lobe is large and somewhat semicircular in shape. Membranes, ears, and skin are usually pale brown to gray. Plagiopatagium is attached to foot at base of toes; uropatagium has sparse hairs, nearly reaching knees; scattered hairs on posterior edge of uropatagium do not constitute a fringe. Calcar is straight and long, extends ¢.60% the length between hindfoot and tail, lacks a keel, and terminates in minute lobule. Skull is moderate in size (greatest length of skull 12:9-14- 4 mm); rostrum is broad, and palate is short and broad; forehead has abrupt slope; braincase is globose; sagittal crest is absent; and lambdoidal crests are absent or, when present, very low. Molars are dilambdodonts, with crowns longer in proportion to width. P? is aligned in tooth row. Chromosomal complement has 2n = 44 and FN = 50, with three large pairs and one small pair of metacentric and 17 pairs of acrocentric autosomes. X-chromosome is medium submetacentric, and Y-chromosome is small submetacentric or acrocentric.

Habitat. Juniper and riparian woodlands and desert regions in coniferous forests, deciduous forests, grasslands, and treeless thorn scrublands, generally at low elevations but up to ¢. 3350 m. The Yuma Myotis is exclusively associated with open water, especially with relatively large bodies of permanent water, regardless of habitat type.

Food and Feeding. The Yuma Myotis forages over water and above riparian vegetation. It catches insects in the air during flight or by trawling in water surface using feet and uropatagium. It can also capture prey on surfaces of leaves, trunks, and rocks. Diet includes coleopterans and soft-bodied insects, such as dipterans, isopterans, lepidopterans, ephemeropterans, trichopterans, orthopterans, homopterans, hymenopterans, and neuropterans, and arachnids. Adults eat greater proportions of Trichoptera and Ephemeroptera and fewer Diptera , and subadults eat proportionally more Diptera . Diet appears to vary with insect availability rather than differences in prey selection, suggesting opportunistic feeding.

Breeding. Males Yuma Myotis captured in June-August showed signs of spermatogenesis. Mating mostly occurs in autumn, and females storage sperm all winter until spring when ovulation and fertilization occur. Peak of pregnancies varies geographically: May-July in British Columbia; April-June until the 1990s and more recentlyJune-August in California; May-June in New Mexico, Oklahoma, and Mexico; and July in Idaho and Colorado. Females give birth to one young, and during birth, they sit upright and catch newborn in their uropatagia. At birth, neonates are c.20% of their mothers’ weights. Females form nursery colonies in caves, abandoned buildings, or anywhere else that has high and stable temperatures. Males are usually absent from maternity colonies and remain alone while young are reared. Yuma Myotis attain reproductive maturity at a younger age than others North American Myotis .

Activity patterns. Yuma Myotis emerge from diurnal roosts at dusk and forage in open areas over streams and ponds and over land in cluttered or uncluttered areas or close to trees. Activity is mostly nocturnal, starting a few minutes before sunset, usually peaking within two hours, and then decreasing, sometimes with second activity peak before dawn. Yuma Myotis often fed just a few inches above the surface of water, repeatedly flying regular routes. They flew up and down rivers and streams in relatively straight patterns and in circular patterns over ponds and small lakes. The Yuma Myotis roosts in caves, limestone and sandstone cliff crevices, hollow trees, loose pieces of bark, cracks in dead trees, abandoned mud nests of swallows, abandoned mines, bridges, attics, and other man-made buildings. Diurnal roosts are short distances from water and where light is dim. Yuma Myotis often use different roosting places each night. They use moderate-length, steeply swept FM calls while forage. Starting frequencies are 59-72 kHz that sweep abruptly down to 45-50 kHz. Calls rarely exceed 70 kHz and have distinctive lazy S-shape. Echolocation parameters vary geographically. In Arizona, maximum frequencies are 55-7-72-7 kHz, and durations are 1-8—4-6 milliseconds. In New Mexico, maximum frequencies are 60-2-78-8 kHz, minimum frequencies are 44-4-48-6 kHz, and durations are 2-2—4-2 milliseconds. Average frequency with maximum energy of search-phase echolocation calls in British Columbia was 55-7 kHz, lowest frequency was 38-5 kHz, and highest frequency was 87-6 kHz.

Movements, Home range and Social organization. In California, the Yuma Myotis moved an average of 2 km (range 0-59- 3-5 km) from roosts to capture locations, and in British Columbia, they moved c. 4 km from maternity roosts to foraging areas. In Arizona, it was reported to be a common summer resident but rare in winter. It was considered a temporary resident in some areas, presumably migrating to avoid very low winter temperatures. Nevertheless, observation of individuals in winter at known summer roosts in New Mexico suggests that it hibernates and does not migrate long distances. It can hibernate in low temperatures and generally is not active in winter. Yuma Myotis can form aggregations of more than 10,000 individuals. Roosts can be shared with other bat species, such as Little Brown Myotis ( M. lucifugus ).

Status and Conservation. Classified as Least Concern on The IUCN Red List. The Yuma Myotis is widespread and presumably has a large population. 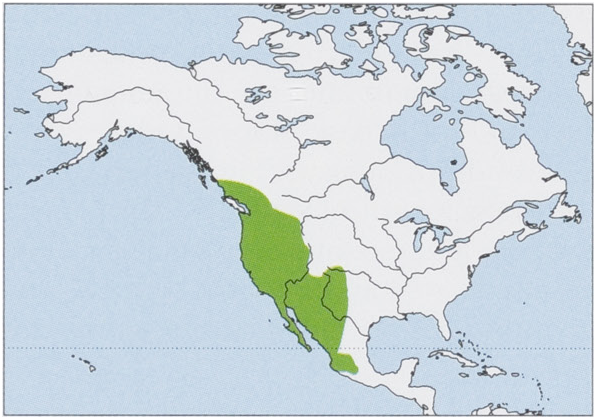