Female genitalia are unknown in the related species ( P. morandinii Zolotuhin & Saldaitis, 2010  ). As stated by Zolotuhin et al. (2010), female genitalia are not diagnostic among species of the genus Poecilocampa  , and therefore they were not examined in the single known specimen of P. deqina  .

Larva. Brief examination in the field revealed no significant differences of the last instar larva of Poecilocampa deqina  from that of the widely distributed Poecilocampa populi (Linnaeus)  except for the larger size, about 65 mm, compared with up to 40–45 mm in the latter species. The larva was not photographed because it pupated soon after it was collected (see below).

Diagnosis. The female in question was unambiguously determined as P. deqina  on a base of external diagnostic characters mentioned in the description of the species ( Saldaitis & Pekarsky 2015) and, additionally, collecting locality situated very close to the place where the paratypes of P. deqina  were collected in environs of Baima Mountain, far from the all known Chinese members of Poecilocampa  . It is also unlikely that the female represents an undescribed species co-occurring with P. deqina  : most of the known Poecilocampa  are distributed allopatrically ( Zolotuhin 2015).

P. deqina  is the closest species to P. morandinii Zolotuhin & Saldaitis, 2010  (type locality: China, W Sichuan Prov., Kangding, road to Zheduo Pass) based on male wing pattern and male genitalia ( Saldaitis & Pekarsky 2015). Only one female (paratype) of P. morandinii  is known to date ( Zolotuhin et al. 2010: 90, fig. 1, I). It was collected in the Anemaqen (Amne Machin) Mountains, Qinghai Prov., China, rather far from the type locality of the species in question. Compared with the latter, the female of P. deqina  differs in the larger wingspan, 53.0 mm (43.0 mm in P. morandinii  ). Apart from colour saturation, which may vary between specimens, the female of P. deqina  differs from P. morandinii  in the less contrasted pattern, nearly straight postmedial line of the forewing (irregularly lunate in morandinii  ), less checkered fringe of the forewing, and rounded medial line of hindwing (nearly straight in morandinii  ). Moreover, P. deqina  has a longer pecten of antenna. On the whole, the diagnostic characters in pattern of the female are the same as those of the male.

All other known Chinese Poecilocampa  species differ from P. deqina  in morphology and distribution pattern. P. nilsinjaevi Zolotuhin, 2005  was described from the Qinling Mts. in the southwestern Shaanxi Province, far from the type locality of P. deqina  , and still known only from males strongly differing from P. deqina  in appearance. Another Poecilocampa  species known from China (Heilongjiang Province) is P. tenera O. Bang-Haas  treated as an eastern relative of transpalaearctic P. populi (Linnaeus) ( Zolotuhin 2015)  . Female of P. deqina  differs from the latter in very large size, wings pattern and colouration.

The members of Poecilocampa  , unlike most species of the family Lasiocampidae  , have a well-developed pupal cremaster ( Zolotuhin 2015). This was previously demonstrated on a widely distributed species P. populi  . In P. deqina  , characters of cremaster probably have taxonomic value: compared with P. populi  , it has poorly developed cremaster bearing only several very short thin curved spines (enlarged cremaster with numerous rather long dense spines in P. populi  ) (figs. 6–9).

Biology. The larva was collected on July 10 at an altitude of 4200 m above sea level, in the foggy upper forest zone, just below the Baima pass, on the ground under a rowan tree ( Sorbus  cf. rehderiana) growing on a stony mountain slope densely covered with different species of Primula  , Rhododendron  and coniferous trees (fig 5). Sorbus  cf. rehderiana is the most probably a host-plant of the species, as the larva was found just beneath the tree, and other plants suitable for the species were not found nearby. Sorbus aucuparia  is reported as a host-plant of Poecilocampa populi  in northern Europe ( Seppänen 1970; Robinson et al. 2010). The larva was very agile, so we suspected that it would pupate very soon. It was collected and placed in a plastic box with the bottom covered by soil and supplied with branches of rowan. Four hours later, when we arrived at our base in Deqen town, the larva had pupated; the pupa was covered by a thick-walled pupal case. As a result, we were unable to make a photo of the larva. Then it was transferred to a private laboratory of the second author in Moscow and stored at a temperature of about 20°C and moderate humidity for the next three months. On November 3 the tegument of the pupa became translucent, and the pupa was transferred to a cold room with a temperature of about 10C. Ten days later the temperature decreased to 0°C, and humidity was artificially increased by frequent water spraying. Finally, on November 17 the imago emerged (figs. 3–4). 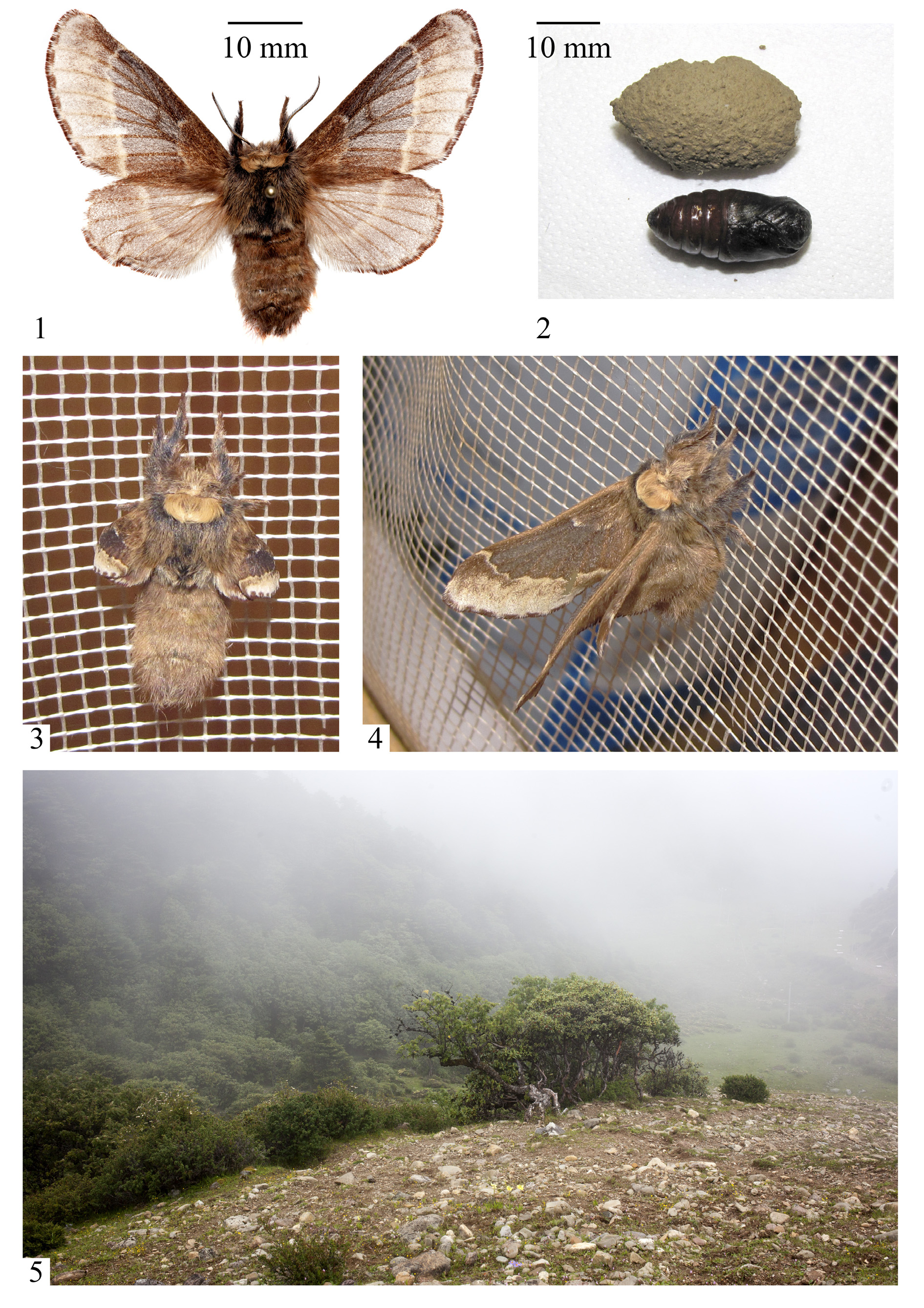