Orbit surrounded by 9 conical papillae; additional conical papillae on head visible with magnification, some corresponding in position to head spines of species that have them; largest, a broad based ‘nose spine’ just anterior to eyes with smaller papillae on snout and forehead, above eyes, on supraoccipital, on operculum, around gill openings and overlying second nuchal plate; very low circular mound-like tubercle, approximately 1.5mm in diameter, high on head above operculum; blunt fleshy ‘neck spine’, adorned with short cirri, at intersection of superior trunk ridge with TrR 1.

Based on CT scan, ossified structures at base of second dermal lobe mid-dorsally on trunk (visible in radiograph and initially interpreted as remnants of dorsal fin pterygiophores) appear to be bony outgrowths of superior trunk ridges.

From late 2010, additional CT scan images of H. paradoxus  can be viewed at www.samuseum.sa.gov.au/ ichthyology/research.

Reproduction. The holotype is a female with a greatly distended abdomen holding eleven hydrated oocytes that are each approximately 2 mm in diameter. It was collected in late July. Although male specimens are unavailable, the similarity of this species with H. minotaur  would support a hypothesis that the pouch is caudal in position.

Habitat. The holotype was collected from the midcontinental shelf benthos (102 m) by researchers targeting bryozoans. High energy waves sweep the sea bed of the Great Australian Bight at this depth producing expanses of rippled sand interspersed with sponge and bryozoan stabilised ‘islands’ ( James et al., 2001). The collection site featured a complex, highly diverse assemblage of bryozoans, including Adeona  , a number of bushy flexible species (Fam. Catenicellidae  ), "lace corals" (Fam. Phidoloporidae  ) and some sponges, on a coarse substrate of calcareous sand (Bock pers. comm.). Seafloor photographs in James et al. (2001: 561, fig. 9) illustrate this habitat type. Water temperatures in the western GAB are moderated by the warm Leeuwin Current during winter. At the time of collection, in late July 1995, the Leeuwin Current was distinct offshore and waters were isothermal ( James et al., 2001).

Distribution. Known only from the type locality south west of Esperance, Western Australia, on the extreme western margin of the Great Australian Bight ( GAB). There are few records of Hippocampus  from the more than 2500 km of high energy coastline, stretching from the extreme south west of Western Australia eastward across the GAB to the tip of Eyre Peninsular in South Australia, but the large mid-continental shelf regions have not been extensively collected.

Comparison with similar species. The only species with which H. paradoxus  is likely to be confused is H. minotaur  . The two are of similar size and body form and share TrR, TaR, and PF counts. All known specimens of H. minotaur  have a dorsal fin with 7 or 9 rays ( Lourie & Kuiter, 2008) and a raised base on the ultimate trunk ring and first tail ring, whereas H. paradoxus  entirely lacks a dorsal fin and has no indication of a raised base at this position. The cleithrum of H. paradoxus  is much more robust and the first nuchal plate is more dorsally prominent with a height about the same as the supraoccipital, relative to the horizontal axis of the head. In H. minotaur  the supraoccipital (‘coronet’ of Gomon, 1997) is tallest and the head lacks the fleshy crest and tapers into a much deeper anterior trunk. Hippocampus minotaur  appears to have lost the thoracic rings ventrally whilst they are retained, in part at least, in H. paradoxus  . The former also lacks the circumocular papillae of H. paradoxus  .

Although H. minotaur  does not feature the dramatic dorsal appendages of H. paradoxus  , some specimens have mid-dorsal tubercular swellings that may be homologous. These swellings are particularly evident on the paratypes (see Gomon 1997, figs 1 b & 3 a, Kuiter 2009, p. 141). They are situated along the body and tail in nearly the same positions and are very similar in appearance to the distal tubercular swellings on the tail of H. paradoxus  . Radiography revealed other similarities. The female H. minotaur  paratype (AMS IA. 3509) has ossified structures on the dorsum similar to the bony prominences of the superior trunk ridges evident in the CT scan of H. paradoxus  . More significantly, the extended TrR 8 ossified elements are present and there are indications of inferior trunk ridge remnants girdling the anterior of the abdomen (see fig 2).

Etymology. Latin masc. adj. paradoxus  , ‘strange, contrary to all expectation’, in reference to the unusual morphology relative to all other seahorses. 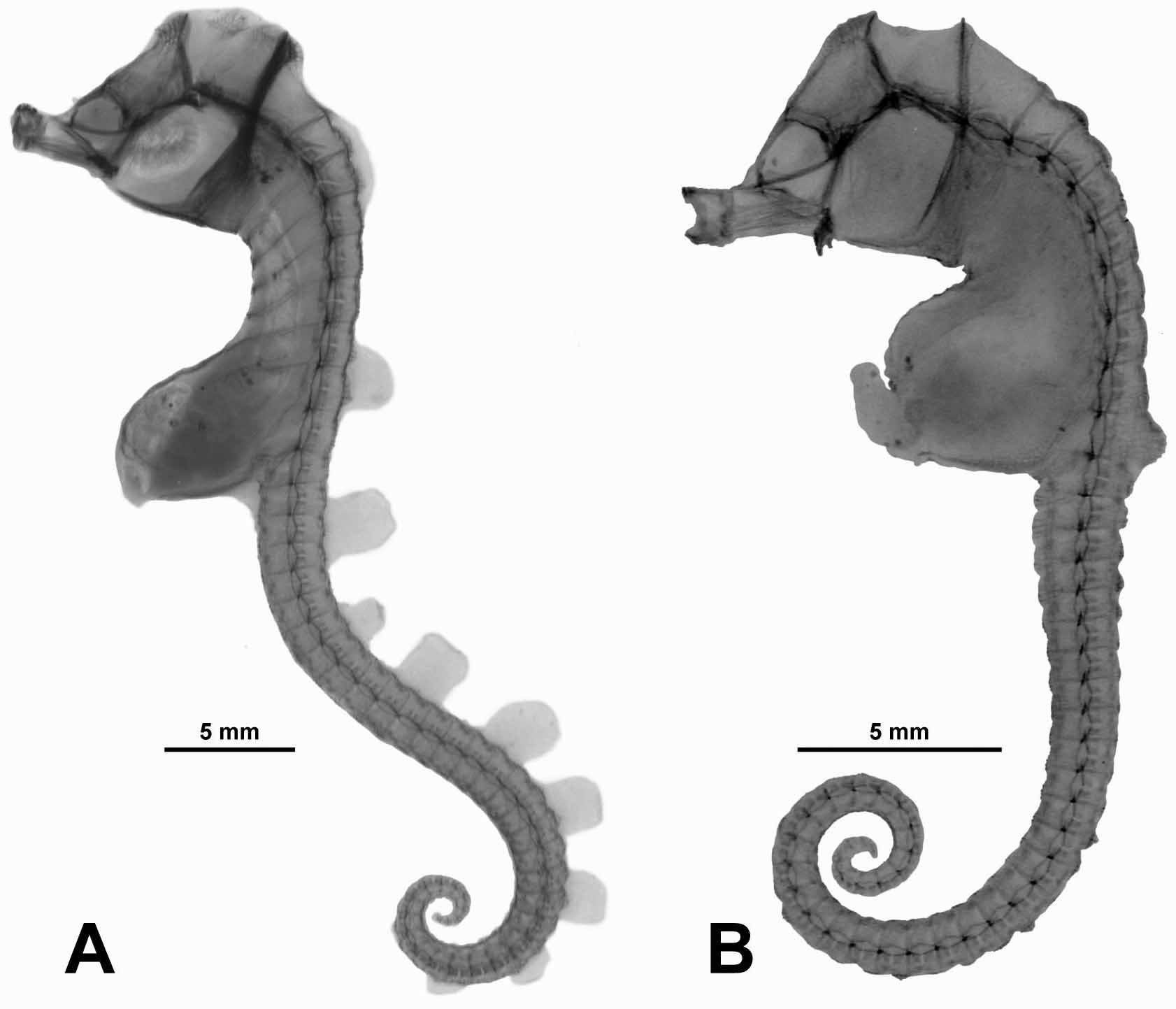