Remarks. Mesovelia horvathi  was described by Lundblad (1933) from a set of four syntypes, consisting of a female specimen taken at Lake Ranau in southern Sumatra (the modern Sumatera Selatan Province of Indonesia), and three additional specimens from Java, consisting of a male from Lake Lamongan, and a male and a female from Lake Pakis, both of these being crater lakes lying immediately to the east of Klakah in eastern Java. At the Lake Lamongan locality, the specimen was noted as having been taken amid aquatic plants, whereas at Lake Pakis the specimens were taken from moss.

In the original description, Lundblad compared his species with M. orientalis Kirkaldy, 1901  , i.e., the currently valid Mesovelia vittigera Horváth, 1895  , and mentioned that the legs of both species were very similar, with the difference being that the middle leg in M. horvathi  lacked ventral spines. Lundblad's discussion would thus imply that in M. horvathi  the fore leg might possess 5–7 ventral spines as in M. vittigera  . However, his figures 72 C and D clearly indicate the absence of such spines on both the fore and hind legs ( Lundblad 1933). This confusion about the presence or absence of dark spines, and their number, on the flexor region of the fore femur has not been noted in subsequent work on the genus ( Thirumalai 1989, 1994, J. Polhemus & D. Polhemus 2000, Andersen & Weir 2004, Chen et al. 2006, Yang & Murphy 2011, Chandra & Jehamalar 2011, Jehamalar & Chandra 2016, Basu et al. 2016, 2018).

In the present study, the third author examined three apterous males and two apterous females of M. horvathi  from Sumatera Utara and Bengkulu provinces of Sumatra. All of these specimens lack spines on both the fore and mid femora, and conform in all respects to the illustrations of M. horvathi  provided by Lundblad (1933). As such, they form the basis for our interpretation of this species. Lundblad did not explicitly designate a holotype for M. horvathi  , and no lectotype has been designated to date. Because we have not seen Lundblad's specimens, and therefore cannot evaluate their condition, we defer from doing so here.

A molecular analysis undertaken by Damgaard et al. (2012), which included sequence data from specimens of M. horvathi  taken in Australia, New Caledonia, Papua New Guinea, and Laos, indicated a modest degree of sequence divergence among the populations grouped under this species name, and subsequent study may reveal that cryptic species are also present in these regions. In particular, in the analysis of Damgaard et al. (2012), the populations from New Caledonia and New Guinea clustered as a clade sister to those from Laos and Australia. J. Polhemus & D. Polhemus (2000) noted that a similar but undescribed species with a differing male paramere morphology was present on Ceylon, and that populations fitting within the broad species concept were also present in Africa, although they speculated that the latter might eventually prove to represent a separate species. In regard to the populations occurring west of Indochina, these authors concluded that “…the westernmost range of M. horvathi  thus remains unclear, pending further analysis of these peripheral populations.”

Our current morphological analysis indicates that many of the populations of the M. horvathi  complex present on the Indian subcontinent represent a set of distinct species, as described herein. A more critical morphological assessment of material from Misool and Sumba islands in the eastern Malay Archipelago now indicates that those populations are also distinct from nominate M. horvathi  , but this problem will be addressed in a subsequent study. The previous few records of M. horvathi  from India by Thirumalai (1989, 1994), Chandra & Jehamalar (2011), Jehamalar & Chandra (2016), and Basu et al. (2016, 2018) may belong to one of the species described here, or other new species. The present study thus suggests that M. horvathi  may not have the wide distribution currently ascribed to it, and that previous records of this species from Australia, Borneo, Papua New Guinea, Japan, China, Indonesia, Malaysia, Myanmar, Philippines, Singapore, Taiwan, Cambodia, Thailand and Vietnam by J. Polhemus & D. Polhemus (2000), Damgaard et al. (2012), and D. Polhemus (2017) should be carefully re-examined. We have plotted the distribution of reliably confirmed populations of this species from Java and Sumatra in Fig. 10CView FIGURES 10. We consider it likely that “true” M. horvathi  may eventually be shown to be endemic to the Greater Sunda Islands. 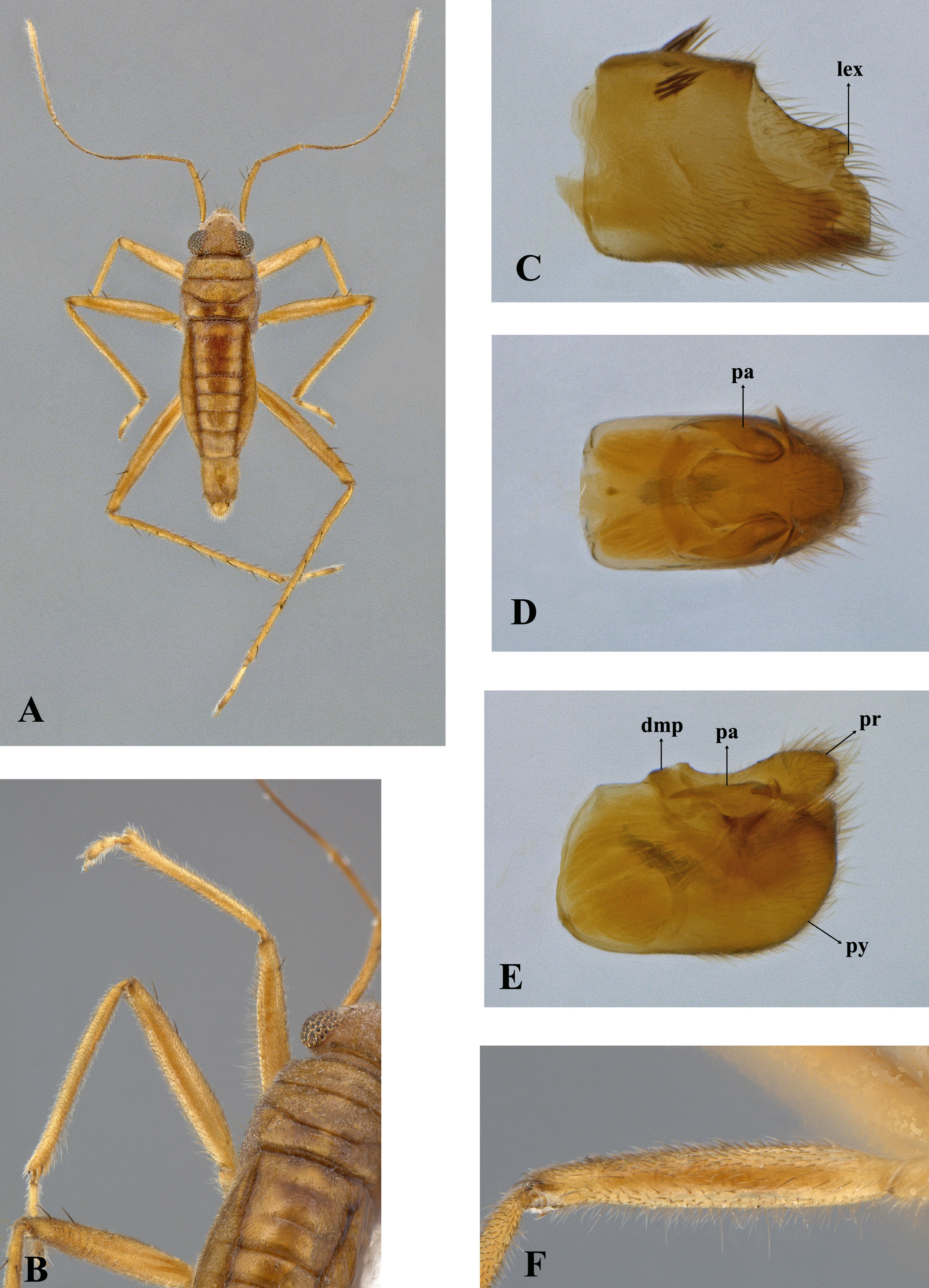