Diagnosis. The narrow, angled white fasciae of pubescence near the scutellum are unique to this species and readily identify it. Other distinctive characters include the dense vestiture of golden hairs on the front of the head, indistinct patches of ochraceous pubescence at the base of the pronotum, and the pattern of pubescence on the elytra.

Head: Covered in fine vestiture of dense golden or pale brown appressed hairs, more coarsely pubescent with off-white to ochraceous hairs on genae and inner eye margins. Narrow median-frontal line mostly obscured; short, glabrous frontal-genal line extending from anterior tentorial pits along anterior margin of genae to base of mandible. Antenna: covered with dense, appressed, mottled off-white and dark, semitranslucent pubescence; dark annulate at apex and base of most antennomeres. Last antennomere mostly dark (with paler pubescence at middle in some specimens), without distinct annulae; similar in color to apex of penultimate antennomere. Antennae longer than body in males, typically extending beyond apices by 4-5 antennomeres. In females, antennae shorter, extending beyond elytral apices by about 4 antennomeres. In both sexes, last antennomere shorter than penultimate. Antennal scape extending to posterior 1/3 or 1/4 of pronotum. Eye: lower eye lobe about as tall as gena below it; over 2 × height of upper eye lobe; lobes connected by 4-6 rows of ommatidia in most specimens. Upper eye lobes separated by little more than greatest width of scape. Mouthparts: frontoclypeal margin with fringe of short pubescence extending to about base of labrum (setae on lateral margins much longer); clypeus without pubescence except at extreme base. Labrum coated with dense, mostly appressed, off-white pubescence with 8-10 long, suberect, translucent setae.

tubercles generally following along costae and suture. Tubercles at base of elytra most prominent, forming weak crests. Setae atop crests and tubercles black, suberect, not appressed. Punctures on elytron pronounced (although partially obscured by pubescence). Humeri slightly projecting, usually without black macula at base corresponding to lateral black macula on prothorax (but small black macula or bare region on some specimens). Epipleuron with golden, partially translucent pubescence only partially obscuring rows of large, separate punctures. Elytral apex subtruncate, with outer apical angle more produced posteriorly than sutural angle. Legs: mostly uniformly pubescent with off-white or ochraceous setae, with indistinct annula of dense ochraceous pubescence at middle of tibiae. Tibiae approximately equal in length to femora; hind legs much longer than forelegs; metafemora extending to about abdominal apex. Tarsi generally coated with short, appressed, off-white pubescence at base, less dense and darker at apices.

Abdomen: Ventrites covered with appressed, off-white or ochraceous pubescence, becoming splotchy at sides. Fifth ventrite in females about 2.2 × broader than long, narrowed and extended at middle; apparently without glabrous midline at base.

Distribution. Endemic to Hispaniola  , this species is known only from extreme western and eastern Dominican Republic, with no specimens known from the Cordillera Central ( Map 7View Maps 7-8).

Remarks. Th is species has been collected June through August at lights and by beating vegetation at night.

Etymology. Th e name is a compound Latin noun referring to the tawny base of the pronotum. 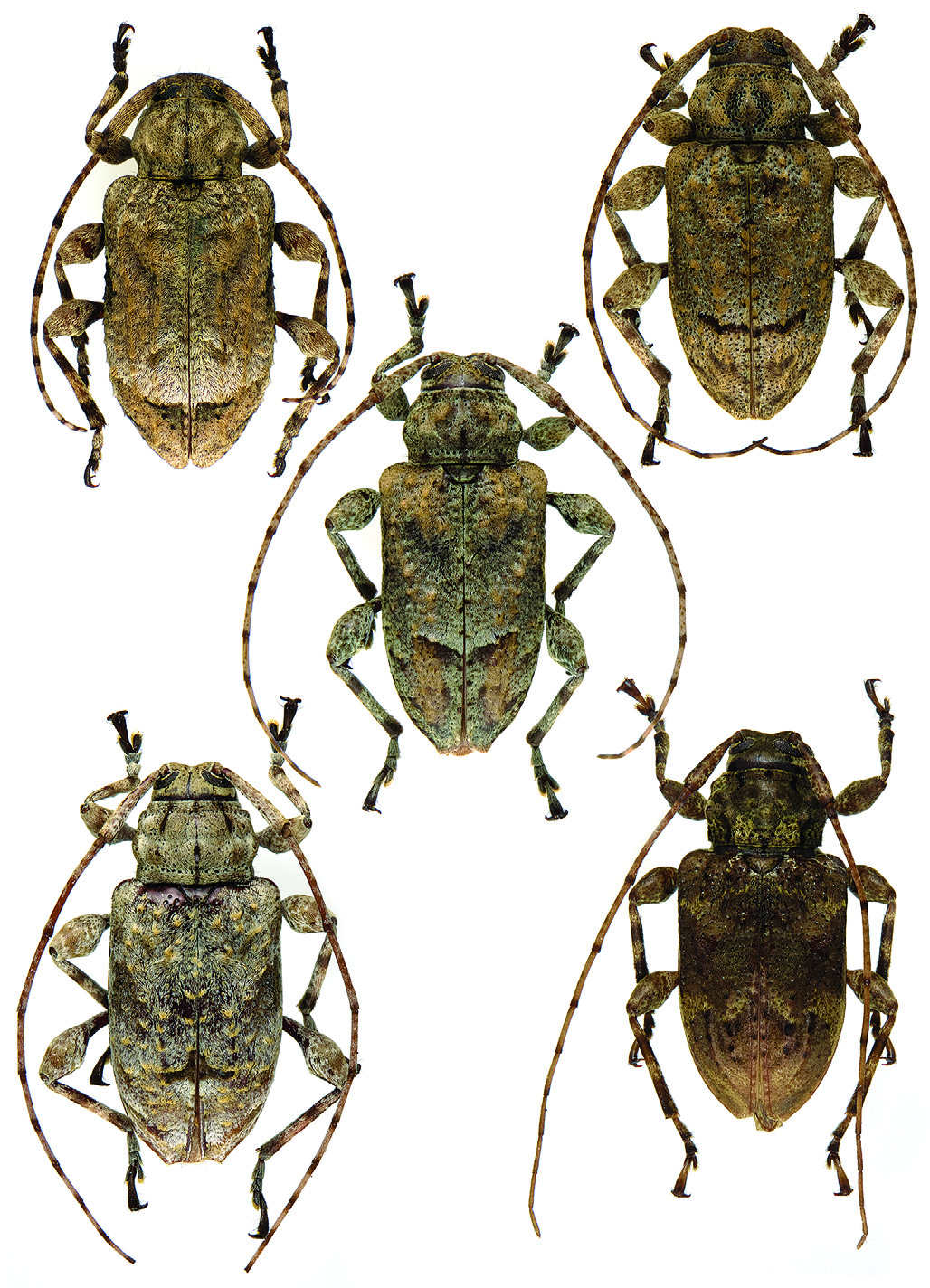