Morphology. The original description made by Kempf (1969) is complete and provides most of the characteristics found in this species. There are only a small number of features that appears to vary among specimens. The size of the spiniform projection on the anterior margin of the clypeus is smaller in some specimens collected in the eastern region of São Paulo state, in the Peripheral Depression, although this variation is discrete. The promesonotal sculpture varies in intensity and size, being well-marked and prolonged almost to the propodeal dorsum in some specimens, and less marked and restricted to the promesonotal disc in others. The dorsum of the petiole node is normally as long as wide, but is wider than long in some specimens. Similar to S. thaxteri  , the scape ventral surface is mostly densely reticulate rugulose with a smooth and shining elongate area extending up to halfway along the posterior margin, and the width is relatively uniform throughout the length. However, the sculpture is less marked when compared to S. thaxteri  . Bolton (2000) was uncertain about the orientation of the pilosity along the leading edge of the scape due to the possible loss of hairs in the specimens he observed. On the specimens studied in the present work, the hairs found in this region are filiform, with a few flagellate hairs, all of them oriented towards the apex of the scape. They are extremely fine and probably easily lost through abrasion. Most measurements obtained from the studied specimens are similar to those obtained by Kempf (1969) and Bolton (2000). However, they have lower values of DPW (Dorsal Petiolar Width) compared to those obtained by Brown (1969). This discrepancy could be a reflection of shape variation of the petiole node. However, the original description and illustration are similar to some specimens observed in this study, more precisely with those with lower values of DPW. A thorough study of shape variation using analytical tools would better describe these structural nuances in the available specimens.

Morphology and natural history. Strumigenys thaxteri  and S. reticeps  are the only members of the informal thaxteri  group proposed by Bolton (2000: 241). They both share a similar mandibular shape, with serially dentate mandibles and a convex dorsal margin when seen laterally; an acute triangular tooth on the cephalic dorsum, prominent humeral angles in dorsal view; spongiform appendages on the petiole and postpetiole, and the body clothed with abundant long and standing, flexuous hairs. Strumigenys reticeps  has the smaller range of the two and is presently known from a few specimens taken in the southern Atlantic Forests of Brazil in the states of Minas Gerais, Rio de Janeiro, São Paulo, and Santa Catarina ( Bolton 2000; Silva 2014, in thesis). The few known specimens suggest the species may be rare and not prone to being collected in litter samples. Even though S. reticeps  bears long silky hairs similar to S. thaxteri  , it lacks robust mandibles and claws, thus its foraging may not necessarily be the same, perhaps taking smaller prey items from the understory. The peculiar posteriorly oriented filiform pilosity in the clypeal dorsum might be related to a distinctive method of perceiving prey or facilitating compound volatilization from a possible clypeal gland. In addition, the long flagellate hairs distributed on the cephalic surface could contribute to perception of hovering prey. The eye length is relatively smaller compared to S. thaxteri  (EL<0.07), but both possess rather similar Ocular Index (OI) values. The similar proportion of eye length/head width found in both species possibly indicates a shared prey preference, with the smaller values of eye length in S. reticeps  simply reflecting an isometric scaling of the eye size with the overall size of this species. Relatively smaller eyes, to a certain extent, may not necessarily imply a greatly reduced perception of potential prey or threats as the perception of environmental light patterns in insects is an interplay of various factors, not just eye size, that enable visually challenging tasks for even relatively small insects ( Gonzalez-Bellido et al. 2011).

Other morphologically similar species are found in the Malaysian leptothrix  group, which also possesses robust, serially dentate mandibles with convex dorsal margin seen laterally, and well-developed spongiform appendages on the petiole and postpetiole. Although most species do not have elongate and flexuous hairs, some have elongate simple hairs on entire dorsal head or restricted to the area behind the highest point of vertex. According to Bolton (2000), some species of the leptothrix  group ( S. elegantula (Terayama & Kubota)  , S. jacobsoni Menozzi  and S. stheno Bolton  ) have particular dentition that increases the gripping/holding ability of the mandible, in which larger teeth intercalate with smaller teeth, with all of them slightly out of alignment and the longer teeth strongly inclined medioventrally. However, this arrangement differs from S. thaxteri  and S. reticeps  , which have the basal 8–9 teeth larger than those situated more distally, with the apical tooth larger than those immediately preceding it. In any case, given such a diverse genus it is expected that similar problems will be met with different solutions.

Sampling arboreal Strumigenys  . The sparse records for both species and the huge gap in the distribution for S. thaxteri  imply both are relatively scarce. If their foraging is mostly upon understory vegetation and not in the leaf litter then this apparent scarcity can be partially considered as a sampling artifact since leaf litter sifting is poorly suited for retrieving arboreal foraging ants. The locality label of the imaged syntype states “from beatings”, implying the collecting method used to capture the material studied by Wheeler (1916). The widespread use of leaf-litter sifters coupled with processing the litter using Winkler type extractors has been a milestone for ant collecting, changing our concept of ant diversity, especially that of ground ants. Our knowledge of the diversity of the genus Strumigenys  has especially been broadened and deepened, but this very diversity obliges us to try novel collecting methods and explore habitats not usually probed by myrmecologists. A classical insect collecting method, the beating tray, has been used by generations of entomologists for general collecting or collecting insects associated with vegetation. Perhaps now is the time to incorporate this contraption into the ant collector’s toolkit and collect the specimens that should fill in the distribution of S. thaxteri  within the Amazon-Orinoco Basin. Jacquemin’s use of this technique permitted the collection of an additional specimen of S. thaxteri  and in Central America some myrmecologists are fully embracing vegetation beating ( ADMAC 2016). 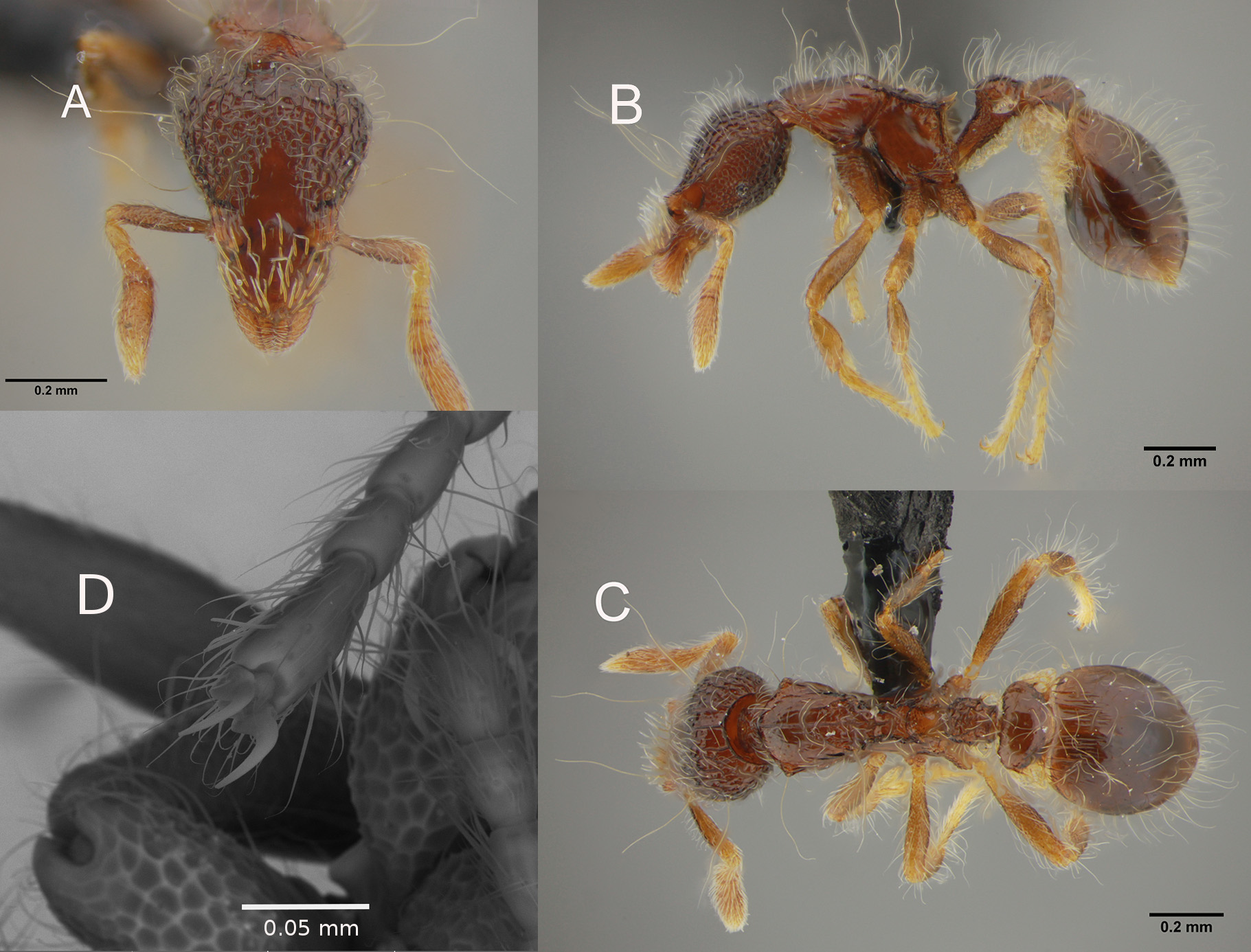