Taxonomy of R. rattus and its relatives is currently influx, and the clade might represent 4-6 species in the R. rattus species complex. As currently recognized, six main lineages in the R. rattus clade are recognized as four distinct species: R. rattus (Lineage I, 2n = 38), R. tanezumi (Lineage II, III, and IV, 2n =42 and 2n = 40 in Sri Lankan Lineage IV), R. sakeratensis (Lineage V) , and R. tiomanicus (Lineage VI) . As currently understood genetically, Lineage I is sister to Lineage II, both of which are sister to Lineage III. The clade containing Lineages I-III aresister to a clade including Lineage IV-VI, Lineage IV and Lineage V being sister to one another with Lineage VI as sister to them both. This phylogeny leaves R. tanezumi paraphyletic. Lineage I and II seem to be the two that spread around the world, with representatives of Lineage I probably originating on the Indian subcontinent and Lineage II probably originating in northern Indochina and Taiwan. Lineage III probably originated from the Himalayan region, and Lineage IV probably originated in the Indomalayan region, both of which are genetically only found in South-east Asia. Karyotype of Lineage III is probably 2n = 42, but specimens from which the karyotype was taken were not included in any genetic study. Lineage IV spread throughout Sundaland (Indomalaysia, Java, and Philippines at least), Sulawesi, and Sri Lanka. This spread was probably proliferated by humans moving through the Australasian region and potentially rafting from Java or another region within the distribution of Lineage IV to Sri Lanka. The Sri Lankan population is rather unique in its karyotype of 2n = 40, which differs from the other populations attributed to Lineage IV, being 2n = 42. Lineage II spread locally through Australasia and then globally. Locally, Lineage II spread from northern Indochina and Taiwan to Japan, New Guinea, and the Philippines (probably from Taiwan), and to Java (from either the Philippines or mainland Indochina). Globally, Lineage II is less prevalent worldwide than Lineage I and only found genetically from South Africa and western USA,as currently known. Lineage I isthe most widespread lineage, spreading from India to Europe and Africa (including Madagascar) in ancient times, following human colonization and eventually adapting to living exclusively around human settlements. During human expansion beyond Europe, European populations were spread nearly worldwide, with genetically identified individuals from northern South America, western USA, Japan, Australia, New Guinea, New Zealand, and various Pacific Islands. All distinct karyotypes (2n = 38, 2n = 40, and 2n = 42) have been tested for reproductive isolation. They could produce a first generation of offspring, but the offspring had a much harder time breeding. R. tanezxumiis recognized as a distinct species here, pending a revision with more specimens worldwide to fully understand the biogeographical history of the R. rattus clade. Distributionally, older introductions and expansion of Lineage I (Europe, Africa, and southern and south-western Asia) are included in the distribution of R. rattus , while the newer worldwide introduction and expansion are treated as recent introductions (North America, South America, eastern Asia, Australia, and the Pacific Islands). Lineages II-IV areretained in R. tanezumi for now. Taxonomy requires further investigation.

Distribution. Originally native to the Indian Subcontinent and now introduced worldwide, including the sub-Antarctic Macquarie I but not Antarctica (modern introductions not shaded on the map). View Figure

Habitat. Originally, various native habitats including temperate montane forest, tropical and subtropical evergreen and montane forests and now generally close to human habitation, both urban and rural, arable and cultivated land, plantations, and in cities, generally at elevations below 2000 m. Roof Rats are very commensal and more often found in tropical and coastal regions, although they can occur at northern latitudesif there is substantial human habitation to keep them warm.

Food and Feeding. Roof Rats are extreme generalist omnivores and eat seeds, vegetation, fruit, arthropods and other invertebrates, carrion, eggs of birds and reptiles, and human trash. Presence of humans generally does not disturb their feeding habits, probably due to their commensal nature. In urban environments, Roof Rats often consume more fresh foods becauseit is generally more available. Small, crumb-like foods are usually eaten immediately as they are found, but larger foods are taken somewhere more secluded to be eaten to avoid predators; when small and large food items are available, they choose larger items and occasionally attempt to take multiple items at once. Hoarding behavior has been observed, particularly when individuals were hungry or pregnant and as a means of avoiding intraspecific competition. Roof Rats prey on eggs of birds and reptiles and adult reptiles, birds and amphibians. Because of their generalist feeding habits, they can be significant agricultural pests.

Breeding. Reproduction occurs year-round in all regions, although there are peaks in summer and autumn. Estrous cycles can be in synch within groups, allowing large numbers of young to be added to a group all at once and increasing chance of surviving to weaning from 28% to 80%. Gestation is c.3 weeks, females can have up to 5 litters/year, and litters have 3-8 young (maximum of ten; 14 embryos have been reported). Young open their eyes at c.15 days old, are able to eat solid food at c.3 weeks old, are weaned at c.1 month old, and reach sexual maturity as early as three months at weights of 80-100 g for females and 60-100 gfor males. After birth, there is usually a resting period between when a female will become pregnant again. Younger females have less stable reproductive rates; older females breed at a uniform rate. Roof Rats generally only live c.1 year in the wild, with a 90-95% annual mortality rate; captive individuals can live as long as fouryears.

Activity patterns. Roof Rats aregenerally nocturnal and crepuscular, but they are seen during the day when densities are high (e.g. cities in general). Most activity occurs before midnight. Foraging mostly occurs shortly before orafter sunset. Younger individuals generally forage earlier in the day to avoid larger and older individuals, which puts them ata higher risk of predation. Bad weather will generally discourage Roof Rats from doing anything outside their nests/shelters. Females forage in many short bouts, except when they are pregnant or lactating when they eat more and forage longer to maintain energy requirements for raising young; males forage less frequently but for longer periods at a time. In old growth riparian forests in California , more than 80% of activity occurred at 20:00-01:00 h and 03:00-6:00 h, and only 15% of daytime sightings were of active rats. Roof Rats are terrestrial, scansorial, and arboreal depending on habitat. They nest in burrows, roofs, walls, or anywhere providing space and concealment.

Movements, Home range and Social organization. In an old growth riparian forest in California, Roof Rats nested in trees 2-15 m above the ground, although most were located in burrows underground. Males moved 38 m/h at night; females moved 27 m/h. Home ranges were 0-22-1-9 ha, although in more urban areas, they would be much smaller because of lack of space and barriers caused by buildings and other man-made structures. Home ranges ofall individuals overlapped, regardless of sex. Nesting can be communally with many individuals in a single large nest, or an individual in a small nest. A recent study found that when Roof Rats are deprived of food, they socialize and share rather than fight. Cooperative behavior is a result of their hierarchal social structure in large nests with more dominant individuals. Nevertheless, fighting is common, and there can be a lack of cooperative behavior among members of a group, which leads to most individuals ignoring each other except when mating or sleeping as a group in the nest. Dominance plays an important role in population regulation because relative dominance in a group hierarchy determines access to resources and mates. Larger individuals tend to be more dominant because they can overpower other individuals. Density is highest in late summer and early autumn. Roof Rats and Brown Rats ( R. norvegicus ) are cautious yet inquisitive. Exploration is common, but both species can be neophobic toward food and other objects; individuals will cautiously approach and smell or touch an unfamiliar object and then dart away quickly. Dispersal distances from nests are generally very short, with individuals usually staying close to their natal nests. In cases of extreme environmental pressure, Roof Rats will move further away from their original nest sites and can make new nests. A study of a semi-natural large nest of Roof Rats found that they made ten distinct acoustic signals, five of which were ultrasonic. Although the utility of these signals is unknown, they probably aid in intraspecific communication.

Status and Conservation. Classified as Least Concern on The IUCN Red List. The Roof Rat is native to the Indian Subcontinent and spread throughout ancient history with humans from India through south-western Asia into Continental Europe and Africa. It was widely introduced to the rest of the world since 1492; to include cities in North and South America, Japan, New Guinea, Australia, New Zealand, and various Pacific islands. Its specific distribution is dynamic and changes regularly as populations expand or are extirpated. The Roof Rat is one of the most invasive and environmentally destructive mammals on earth. It is well-known for being involved with bubonic plague, with its fleas (Nosopsyllus fasciatus and Xenopsylla cheopis) serving as vectors of the bacterium Yersinia pestis. In recent times, small densities of Y. pestis have been found in many other rodent species around the world, but there have been recent appearances of it in Roof Rats in Madagascar at higher densities, threatening public health. The Roof Rat and its parasites are vectors for many other diseases, including the Seoul virus, Kyasanur Forest Disease (flavivirus), scrub typhus (Orientia tsutsugamushi), rickettsialpox (Rickettsia akari), and Q-fever (Coxiella burnetii), to name a few. The ways in which endoparasites and ectoparasties of Roof Rats affect human health and survival are substantial, and many methods of control have been used to reduce their numbers or eliminate their populations. Roof Rats also threaten native and,in particular, island species; they can outcompete other rodents and are predators of many birds and reptiles. They also cause damage in households and businesses and regularly consume and spread human trash. The Roof Rat is also an extremely destructive agricultural pest, consuming pretty much every kind of farmed food. It has not been as extensively domesticated and selectively bred as the Brown Rat, but it is occasionally used in research and kept as a pet. 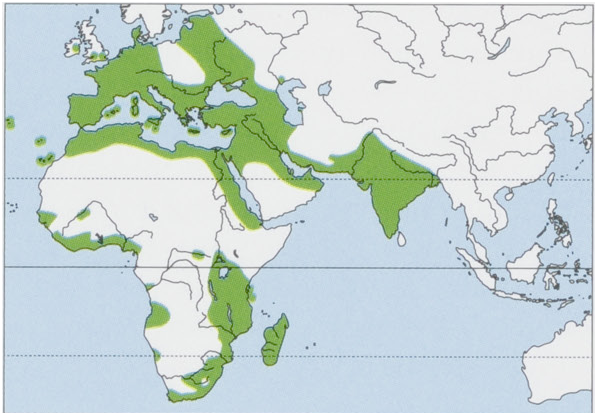 Distribution. Originally native to the Indian Subcontinent and now introduced worldwide, including the sub-Antarctic Macquarie I but not Antarctica (modern introductions not shaded on the map).