Among previously described species, Mortoniella simla is most similar to M. meralda (Mosely) and M. panamensis Blahnik and Holzenthal. All of these species possess an elongate, asymmetric, apically scabrous, ventromesal process on the inferior appendages. Additional new species with the same character state, described in the current paper, include M. bothrops , M. curtispina , M. parameralda , and M. ruedae . Among these, M. simla , M. curtispina and M. ruedae , are distinctive in having prominent rounded dorsolateral projections on the phallicata (a character previously used to characterize species of the florica subgroup). The character is also suggestively developed in M. bothrops , but probably different enough so that it would not be confused with the three species mentioned. Mortoniella simla can be distinguished from M. curtispina and M. ruedae by the relative lengths of their paramere appendages: very short in M. curtispina , of intermediate length (generally shorter than the dorsal phallic spine or mesal process of the inferior appendages) in M. simla , and elongate (longer than either the dorsal phallic spine or mesal process of the inferior appendages) in M. ruedae . The development of the ventromesal spine of the endophallic membrane is also different in the three species: absent in M. curtispina , very short in M. ruedae , and large and prominent in M. simla . The overall similarity is probably greatest between M. simla and M. ruedae . Differences between the female genitalia for the two species are illustrated in Figures 45 and 46.

This subgroup is comprised of Mortoniella limona Flint and the seven new species recognized here. Species range from Guyana to Peru. In general, the dorsal phallic spine is compressed (laterally flattened) in species of this subgroup. The most diagnostic character defining this group is the presence of a pair of ventral (and usually rounded) apicomesal processes on tergum X, which more or less straddle the dorsal phallic spine ( Fig. 52A View Figure 52 ). Additionally, all of the species have 1 or 2 pairs of enlarged endophallic spines. When 2 pairs are present, it is obvious that the second pair is part of the same process. The spines possibly represent a modification of the small phallotremal spines bordering the phallotremal opening in a number of other species subgroups. Although these large paired spines are present, a ventromesal endophallic spine, which is a common feature in many subgroups of the leroda group, is absent. Species in the M. limona subgroup also lack dorsolateral sclerotized processes on the phallicata, but most of the species have the ventral margin of the phallicata modified into a kind of projecting lobe, only slightly developed in some species, but distinctly projecting in others. The ventral process of segment VI is generally large and subtriangular, decidedly ventrally projecting, and very wide basally. This compares to a more posteriorly directed process in members of the punensis subgroup. The anterior margin of this process is not retracted, as in many members of the florica/leroda subgroup, with the sole exception of M. guyanensis , n. sp., whose ventral process is more or less typical of species in that subgroup. 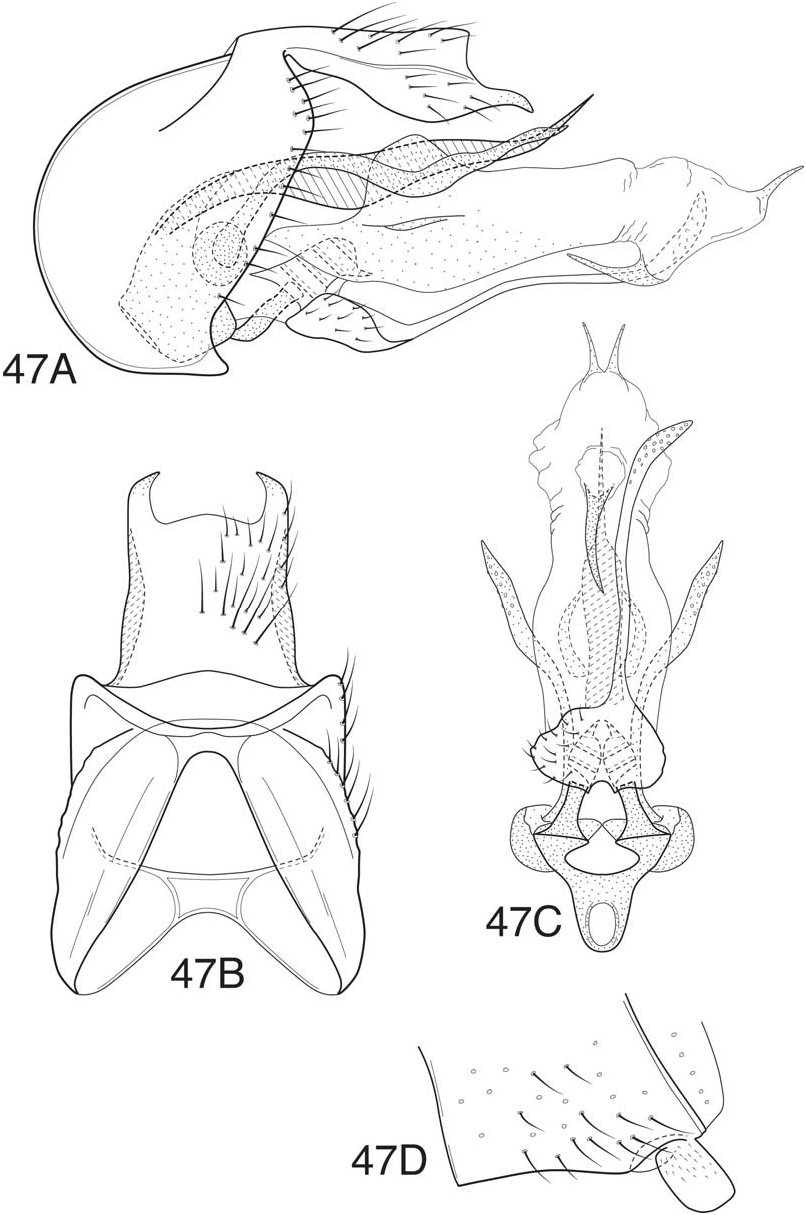