Generic diagnosis of mature larvae. The larval description of S. erythropterus  presented in this paper is not in agreement with the earlier one by Boháč (1982). Therefore, these literature data were not applied in further diagnostic analysis. The morphological data regarding S. erythropterus  presented below combined with the data extracted from the superficial description of S. cesareus ( Pototskaya 1967)  were used to determine the diagnostic characters of genus Staphylinus  . They are as fallow: frayed setae absent; anterior margin of labrum with 9 very weekly visible, slightly separated to each others, low teeth; mandible with four setae; small tooth on mandible; stalk of apotome wide; ligula stump-shaped with two pairs of setae; hypopharynx membranous and thickly pubescent; stipes of maxilla with hair-like cuticular processes; mala short (2.5 times shorter to segment I of maxillary palp); maxillary and labial palp three- and two-segmented, respectively; foretibia with comb of bifid setae; tarsungulus bisetose; cervicosternum triangular divided at least partially; urogomphi longer to pygopod.

Generic diagnosis of pupa. The description of pupae of S. erythropterus  given by Szujecki (1960) is incomplete. The author described and illustrated the pupae exclusively based on one specimen collected in the field. Due to this, some significant morphological structures could be broken, and therefore not recorded or illustrated. The combination of characters permitting the distinguishing of pupae of Staphylinus  from other known pupae of subtribe Staphylinina  ( Creophilus  , Ocypus  , Ontholestes  , Platydracus  , Tasgius  ) is as follows: the length of hind leg reaching half length of the 5 th (morphologically 7 th) well visible from ventral side abdominal segment; the presence of pair setae on three terminal, abdominal segments (VII – IX); the number of setiform projections on pronotum (19 – 25); antenna, not protruding half length of the shortened elytra; the body length: 9 – 10.2 mm ( Dajoz & Caussanel 1968; Schmidt 1994; Staniec 2004; Staniec & Pietrykowska 2005; Staniec et al. 2009). A brief description and sketchy figure of pupal second member of Staphylinus—S. cesareus  were given by Boháč (1982). Considering a scant, intrageneric comparison, S. erythropterus  differs from S. cesareus  in the tarsi reaching half length of the 5 th well visible abdominal segment ( S. cesareus  have tarsi protruding to anterior margin of the 3 rd abdominal segment).

Description of mature larva and pupa of S. erythropterus  (adult habitus and aedeagus as in Figs 62, 65, 66)

Notes on the life history of S. erythropterus  in laboratory condition. During the rearing, conducted from 3 May to 15 June 2011, the insects were able to fully complete their life cycle. Immediately after catching, imagines started copulation that repeated with intervals for a period of 6–12 days (from 5 to 17 May). The female oviposition lasted from 6 to 21 May (15 days in total). The time of the copulation stage coincided with the oviposition in laboratory conditions. This suggests that the actual time of oviposition (in field conditions) could have started before 3 May. During the oviposition period, insects hid in the ground and laid eggs every day. One female laid 1 – 2, sporadically 3 eggs per day. These data, however, may not be reliable, because they result from rearing of only two females (the third female died after laying 3 eggs). Eggs were laid separately, distributed in the soil filling the rearing containers. During the oviposition (15 days) one female laid a total of 26 eggs.

The period of embryonic development varied from 8 to 10 days (mean 9 days). In the laboratory conditions the larval development lasted from the middle of May (14.05) to the middle of June (12.06). The development of particular larval stages ranged from 5 to 7 days (mean 6 days) for the first stage (L 1), and 7–9 days (mean 8 days) for the second (L 2). The time of occurrence of both larval stages lasted 4 weeks. Shortly before pupation, S. erythropterus  larvae, as usually most of the known larvae of Staphylinini  , were becoming less and less active. The mean duration of development of the prepupae and pupae was 2 and 12 days, respectively. Prepupae and pupae were observed in the laboratory from the end of May (29.05) to June (26.06). After the metamorphosis, the mature specimens of the new generation came out onto the soil surface in the first decade of June (10.06). Their appearance coincided with the presence of previous-generation specimens.

The complete duration of the development of S. erythropterus  under laboratory conditions, from the egg until the emergence of the adult form of a new generation, was 36 days on the average ( Fig. 67View FIGURE 67).

Remarks on the inherency of two larval instars of S. erythropterus  unique within Staphylinini  . The present paper provides a new insights into the life cycle of representatives of tribe Staphylinini  . S. erythropterus  has only two larval instars, in contrast to three instars observed in the case of other closely related species: Acylophorus wagenschieberi  , Creophilus maxillosus  , Ocypus fulvipennis  , Philonthus rubripennis  , Platydracus latebricola  , Quedius brevicornis  ( Dajoz & Caussanel 1968; Staniec 2003; Staniec 2005; Staniec & Pietrykowska- Tudruj 2007; Staniec et al. 2009). The following evidences lack of the third larval instar in the life cycle of S. erythropterus  : differences in the size of morphological structures between successive larval stages, short time of the total duration of the life cycle, amounting to 13,6 days, and the presence of only two larval exzuviae (belonging to L 1 and L 2) in the rearing chambers. Table 3 presents the comparison of the size of the most important morphological structures: head width and length, as well as pronotum width and body length of the first and second larval stage and prepupa. The convergence of the size of all the selected structures in the second larval instar and prepupa strongly suggests that this (second) larval stage is the last one. The distinction of two larval stages in the life cycle of S. erythropterus  is in accordance with the determinations by Tikhomirova & Melnikov (1970), and contradicts those by Boháč (1982). Based on laboratory rearing, Boháč distinguished and described three larval stages. The comparison of the head width of all larval stages, presented herein, however, firmly denies his statement, and confirms the lack of the third larval stage.

It is interesting, how the process of embryonisation is reflected on the larval morphology. In their study on the late embryogenesis of Staphylinus, Tikhomirova and Melnikov (1970)  maintain that the first larval stages are the “missing” ones. According to the authors, the process of embryonisation has gone so far that the first larval stage has been completely included in the egg. Newly hatched larvae of Staphylinus  have well sclerotised slerites and developed chaetotaxy. Their morphology is similar to that of the second larval instars of other known larvae of Staphylinini  . Our evaluation of larval characters, however, is not in complete accordance with the the statement of Tikhomirova and Melnikov (1970). In the case of Staphylinini  , as far as their immature stages are known, the newly hatched larvae of S. erythropterus  have characters also observed in both the second and first larval stage ( Staniec 2003; Staniec et al., 2009). The main features of newly hatched larvae making them morphologicaly similar to the first stage are the following: lack of comb of bifid setae on the tarsungulus; a lower number of setae (in comparison to the last larval instar) on the femur, tibia (27 and 22, respectively) and segment I of the urogomphi (about 18); the presence of rod-shaped setae on the abdominal tergites. Compared with the second larval stage, newly hatched larvae are similar in terms of the body size. They also have the same number of sensory appendages and solenidia on the third antennal segment (3 and 1, respectively) as well as setae on tarsungulus (two setae).

In conclusion, the newly hatched larvae of S. erythropterus  combine morphological features, observed in the first and second larval instars of other known larvae of Staphylinini  . The tendency of embryonisation of S. erythropterus  may be related to the intensification of predation of this large and very active staphylinid ( Tikhomirova & Melnikov 1970).

Concluding remarks. Platydracus Thomson, 1858  was originally described as a separated genus. Until 1956, however, almost all authors considered the taxon a subgenus of the genus Staphylinus Linné. Even  though Coiffait (1956) re-elevated Platydracus  to the genus level, some authors still consider Platydracus  a subgenus. The taxonomic history of both of the genera shows they are closely related. As usually, all these taxonomic transfers were done besed exclusively on adult feateures. Our study enriches the current database of adult characters with new, larval ones. Numerous significant characters suggesting the genus level of Platydracus  , and the distinction between the larvae of P. latebricola  and S. erythropterus  presented in table 2, seem definitely confirm the validity position of the categorization of the species as separate genera. FIGURE 67. Occurence of various developmental stages of S. erythropterus rearing in the laboratory. 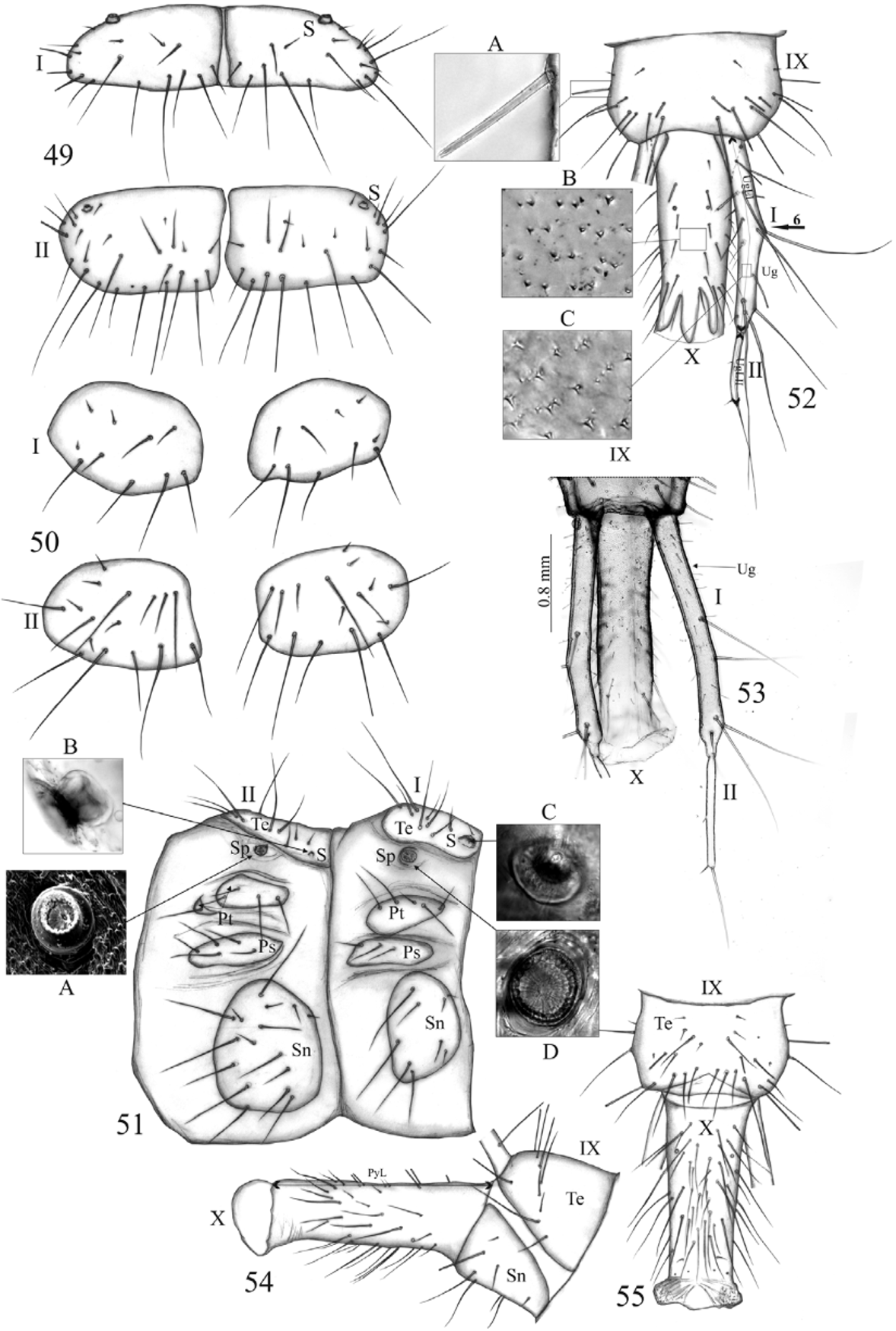 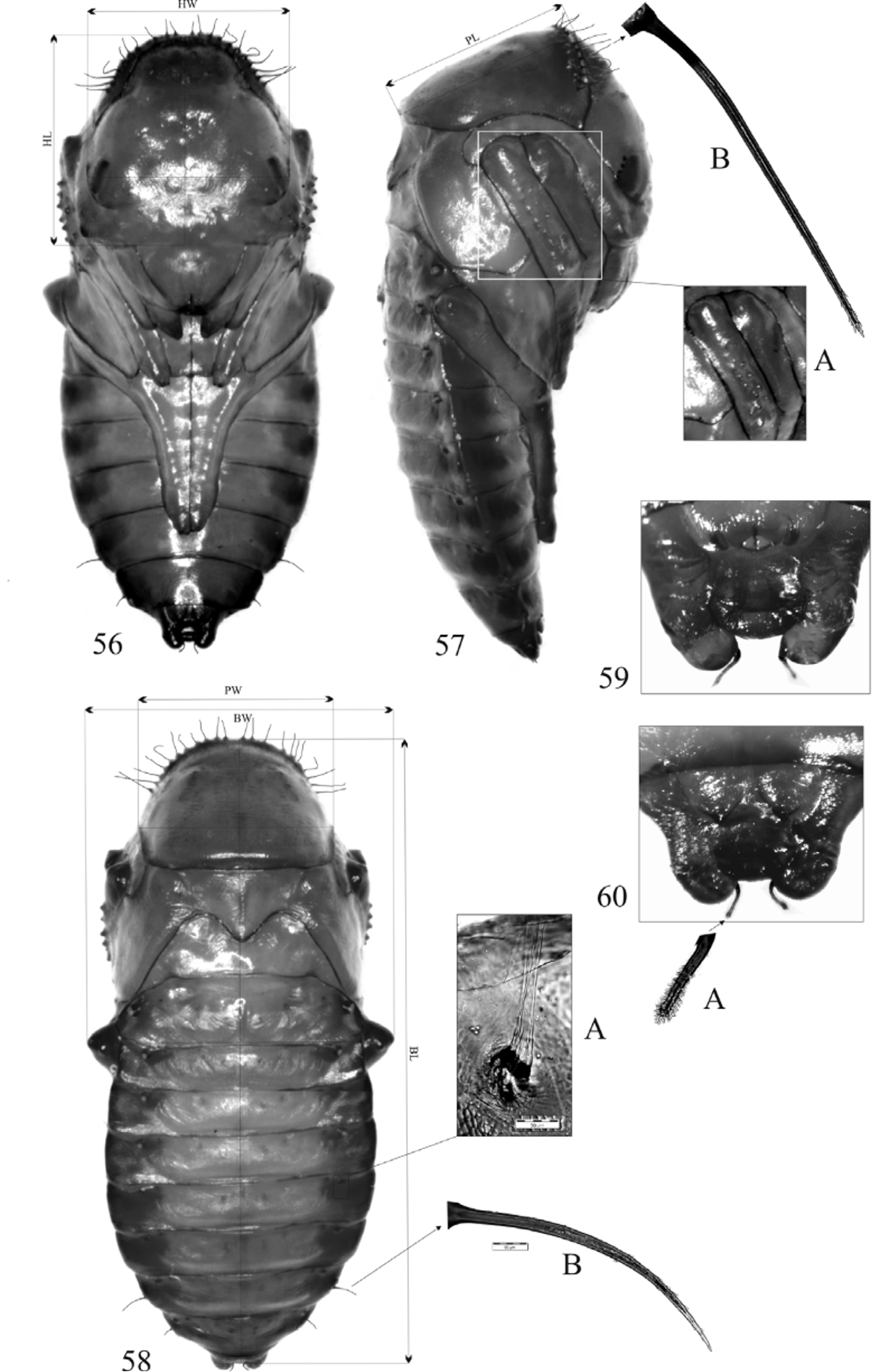