The new species can be easily recognized by the following combination of characters: i) cuticular projections above lateral ocelli strongly reduced (almost entirely missing in some specimens); ii) antennomeres of males asymmetrical (s-shaped); iii) hindwing of females with large, yellowish white and partially opaque area that spreads over most or part of the membrane; iv) anterodorsal lobe of hind tibiae at least 50% the length of tibial length (i.e., not narrowly restricted to its middle section).

The specific epithet refers to the Phoenix, a mythical, immortal creature that is born again from its own ashes after being consumed by fire. The new species is a homage to the Museu Nacional of Rio de Janeiro, which was destroyed during a massive fire on September 2, 2018. The entire entomological collection, representing more than 5 million specimens, was destroyed, including all praying mantis specimens. Only a few specimens of Vates  borrowed in the context of this study, including our new species, survived the event. Vates phoenix  sp. nov. thus symbolically attempts to link the past and the future of the Museu Nacional, as it represents the rebirth of the Mantodea  collection and our hopes for the revival of an even stronger institution in the not too distant future.

PROTHORACIC LEGS. Forecoxae triangular in cross-section, ventral margin pale yellowish brown, except for small dark spot on its anterior end, and a larger, preapical one on its posterior aspect; dorsal margin with nine spine-like, darkened tubercles interleaved with smaller, paler ones; color patterning in general similar to that of males. Forefemora light brown, three-banded, and with a small spot in anterior region of each femur near trochanter. Dorsal margin of forefemora slightly sinuous. Spination formula of forelegs: F =4DS/15AvS/4PvS; T=15(R)–16(L)AvS/13(R)–11(L)PvS. Discoidal spines I, II and III pale with dark spots at their base and apex, spine IV entirely dark. Anteroventral spines II, IV, VI, VIII and X slightly reclined, spines I–XII entirely black, XIII and XIV black laterally and at apex, XV with black base and apex, spine XV largest, straight and darkened at its base and its tip; posteroventral spines black at their base and tips; a well developed genicular spine on each sides of femora; tibial spine groove located in proximal ¼ of femora. Foretibiae light brown, dorsally three-banded.

Svenson et al. (2015) listed all species of Vates  they considered valid, totaling 13 spp. All these species are herein discussed in relation to our new species. The males of V. phoenix  sp. nov. share with those of V. biplagiata Sjöstedt, 1930  , V. luxuriosa Beier, 1958  , V. amazonica (Westwood, 1889)  , V. pectinicornis (Stål, 1877)  , V. foliata (Lichtenstein, 1802)  and V. lobata ( Fabricius, 1798)  the asymmetrical, s-shaped antennomeres, whereas the females share with those of V. serraticornis Stål, 1877  , V. festae Giglio-Tos, 1914  , V. weyrauchi Beier, 1958  , and likely also V. boliviana Giglio-Tos, 1914  (which remains known from males only) the yellowish white tinge of the hindwing membrane. None of the preceding species has both males with s-shaped antennomeres and females with yellowish white hindwings. Therefore, V. phoenix  sp. nov. possesses a unique combination of character states unknown in other species of Vates  , making its identification straightforward. In the absence of either one of the sexes for effective comparisons, the reduced ocellar tubercles of V. phoenix  sp. nov. represent a distinct character state for the species, common to both sexes, and unique among members of the genus (compare, for instance, with Fig. 6View Fig I–J). Our new species can also be easily distinguished from V. pectinata Saussure, 1871  and V. chopardi (Deeleman-Reinhold, 1957)  for lacking the dorsal, preapical lobe of the forefemora, a distinct character shared by the latter two species ( Fig. 7View Fig) — which Roy (2012) suggested as likely synonyms. Additionally, we were unable to compare V. phoenix  sp. nov. with the type specimen of Vates lobata ( Fabricius, 1798)  . This species was originally described from “Cajennae” (= Cayenne, French Guiana) as Mantis lobata ( Fabricius 1798)  in the ‘Supplementum’ to ‘Entomologica Systematica’ — not to be confused with Mantis lobata Fabricius, 1781  , a synonym of Harpagomantis tricolor (Linnaeus, 1758)  ( Galinthiadidae  ) sensu Beier (1934). Examination of the Banks collection (JR) housed by the Natural History Museum, London (containing a sizable portion of Fabricius types) did reveal the presence of Mantis lobata Fabricius, 1781  , though no specimen attributable to Mantis lobata Fabricius, 1798  (i.e., Vates  ) was found there. The taxa that Fabricius (1798) described from “Cajennae” in his ‘Supplementum’ were owned by Louis Augustin Guillaume Bosc d’Antic (N. Kristensen, pers. com. 2011), a French naturalist whose insect collection, in part studied by Fabricius, dispersed across European natural history institutions after his death in 1828 ( Notton 2007). A good portion of this material eventually made it to Paris and Geneva; however, examination of these and other European collections also containing some of Fabricius’ types, such as the Zoological Museum in Copenhagen (N. Kristensen, pers. com. 2011) and the Hunterian Museum in Glasgow (online catalogue: http://collections.gla.ac.uk/) did not turn up any specimen attributable to the type of Mantis lobata Fabricius, 1798  . This specimen is most likely lost. Regardless of the fate of the type specimen, the new species can be distinguished from Vates lobata  on the basis of its distribution, as French Guiana and Rio de Janeiro are biogeographically distant and unrelated regions that do not share any praying mantis species. Finally, Vates obscura Toledo Piza, 1983  , listed as valid in Svenson et al. (2015), had already been synonymized with V. biplagiata  in an earlier publication ( Agudelo & Rivera 2015), and thus we conclusively remove this species from the Vates  checklist.

Morphological comparison of male genitalia provided insights on the affinities of the new species. The only species whose male genital structures are known are Vates chopardi  ( Lombardo 2000: figs 25–27), and V. biplagiata  and V. festae  ( Medellín & Salazar 2011: fig. 14). Morphological comparisons between V. phoenix  sp. nov. and V. biplagiata  genitalia showed that both species share a strong, proximally bent afa, whereas the accentuated sigmoidal shape of the same can also be observed in V. chopardi  , though in the latter the afa is not bent to the same degree as in V. biplagiata  . Differences in genital structures are more accentuated between V. phoenix  sp. nov. and V. festae  , the latter with a much straighter afa and, and a shortened and robust Pda on the ventral phallomere. Coincidently, the phylogeny of Vatini  proposed in Svenson et al (2015) recovered three main clades within Vates  : one containing V. chopardi  , sister to another clade comprised of V. festae  and V. weyrauchi  , altogether sister to a more diverse clade containing V. biplagiata  . Our analysis of external morphology and existing reports of male genital structures thus suggests a closer affinity to members of this latter clade, which in Svenson et al. (2015) also included V. luxuriosa  , V. amazonica  , V. pectinicornis  and two additional, unidentified species. Further phylogenetic studies are necessary to test this hypothesis and resolve evolutionary affinities with all members of Vates  .

Rehn (1935) noted that species of Vates  were difficult to come across in nature. Things have not changed much since Rehn’s times, as there still is very little information in the literature regarding the biology of Vates  . Below we present natural history information of Vates  spp resulting from our own observations and literature accounts, and summarize this information to place it in the context of our new species.

Neither nymphs nor adults of V. phoenix  sp. nov. were ever found in their natural habitat. Unlike members of other sympatric genera, all broadly sampled across Rio de Janeiro by Projeto Mantis’ research team, we were unable to locate specimens of Vates  in any manually sampled plant formations in the three years that this project spanned. This suggest that Vates  spp. likely prefer higher layers within the vegetation as perching and hunting grounds, thus making their collection at ground level difficult. In fact, Dantas et al. (2008) reported Vates  spp. flying to canopy light traps 45 m above the ground near Manaus, Brazil. Interestingly, the latter study reported collecting a few females, thus evidencing enhanced flying capabilities of this sex in Vates  . Behavioral observations conducted on the only wild-caught female indeed showed that this sex is able to sustain controlled gliding for short distances while moving across perching sites. Our anatomical examinations of V. phoenix  sp. nov. revealed that females have relatively larger ocelli compared to other non-Vatini females, a pattern consistent with flying capabilities in female praying mantises and other insects ( Battiston et al. 2018). Further, reduced sexual dimorphism in wing size and shape is evident in the examined specimens (e.g., Fig. 2View Fig C–D). This likely explains why females of Vates  are sometimes lured to light traps, as shown by Dantas et al. (2008) and corroborated by some of us through field work (JR, pers. obs.). Collecting efforts using this sampling method could eventually result in collecting additional female specimens of V. phoenix  sp. nov.

Angatuba (São Paulo) and Reserva Ecológica de Guapiaçu (Rio de Janeiro) represent the westerneasternmost limits of Vates phoenix  sp. nov. based on the available data. Unfortunately, it is difficult to determine the extent of the original distribution of V. phoenix  sp. nov. and other sympatric species, as the original Atlantic Rainforest circumscribed by these localities is now heavily altered by urban development and farming, thus affecting this and likely other praying mantis species ( Rodrigues & Cancello 2013). Sampled localities showed that V. phoenix  sp. nov. ranges from 7 to 600 m. Distributional records compiled from the literature revealed that several species of Vates  are found at mid- to higher elevations. For instance, the dominant species along the oriental slopes of the Peruvian / Ecuadorian Andes and neighbouring lowlands are V. weyrauchi  (100– 1000 m), V. luxuriosa  (400– 1000 m), V. biplagiata  (180 – 2900 m) and V. festae  (1000 – 1700 m) ( Lombardo & Agabiti 2001; Rivera & Vergara-Cobián 2017), with the latter also found on the eastern slopes of the central and oriental cordilleras of central Colombia (450– 2400 m) ( Medellín & Salazar 2011; Svenson et al. 2015) and in the vicinity of Manaus, Brazil (ca 90 m) ( Dantas et al. 2008). The relatively narrow vertical distribution of V. phoenix  sp. nov. is comparable to that of V. amazonica  and V. chopardi  , both predominantly lowland species mostly found below 500 m, the former across the Amazon basin and the latter along the Mexican Pacific and Atlantic lowlands ( Svenson et al. 2015). All this information suggests that several species of Vates  have a broad altitudinal range (e.g., V. biplagiata  ), and that the genus has a tendency to be more diverse at higher elevations. However, distributional records across the Amazonian lowlands are still scarce for most species and more surveys are necessary to infer patterns of vertical distribution across the genus.

Reared specimens preferred perching clinging upside-down, often keeping their raptorial forelegs stretched forward to form a 90º angle relative to the body ( Fig. 8View Fig). This posture was assumed either de novo or enhanced in response to a nearby observer the insect possibly perceived as a potential threat. Robinson (1969) reported a similar behavior in Pseudovates chlorophaea (Blanchard, 1836)  (cited as Phyllovates chlorophaea  therein) in Panama, regarding it as a combination of leaf and stick mimicry. More efforts are necessary to unveil further aspects of the natural history of Vates  spp, and of Vatini  in general. 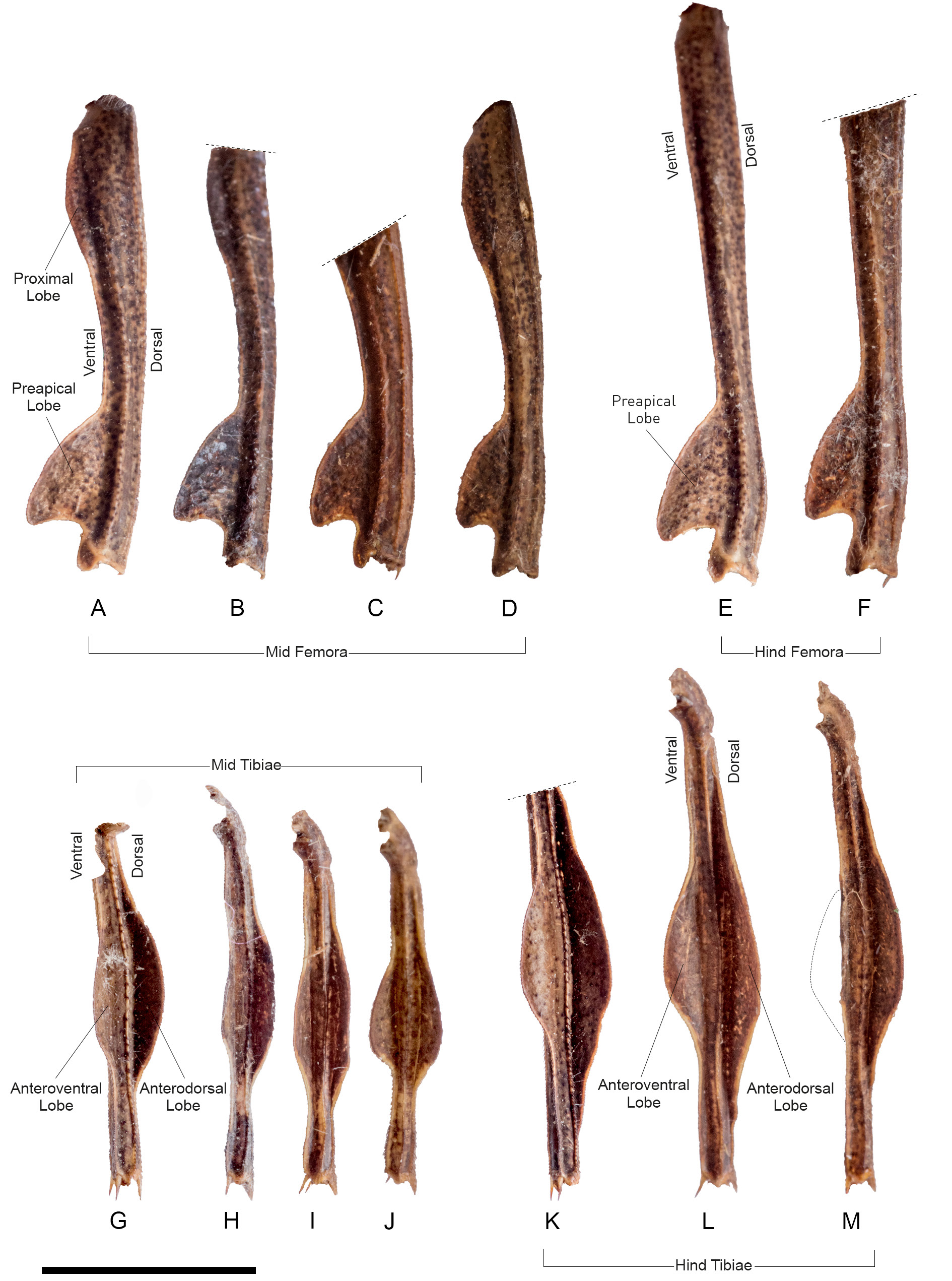 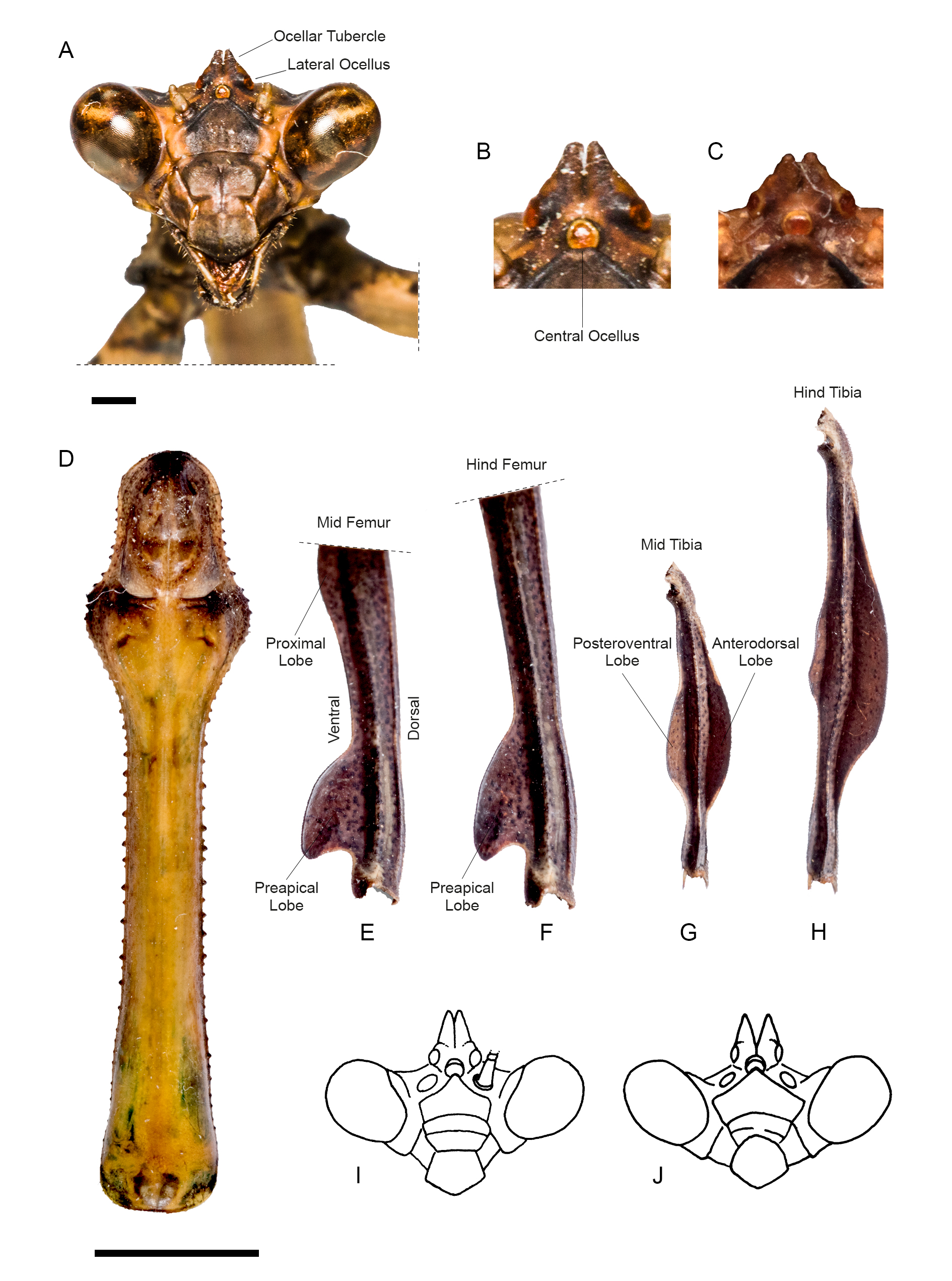 Fig. 7. A. Vates pectinata Saussure, 1871, holotype, ♂, and labels (Muséum d’histoire naturelle de la Ville de Genève, Geneva, Switzerland); note: the male and female specimens portrayed in fig. 8d–c of Svenson et al. (2016) and reported as Vates pectinata cannot be attributed to this species. B. Lobovates chopardi Deeleman-Reinhold, 1957, holotype, ♂, and labels (National Museum of Natural History, Leiden, the Netherlands); note: wings are colorless and hyaline in the actual specimen, whitish tinge is due to a photo originally taken against a white background. Fig. 8. Habitus of Vates phoenix sp. nov. Adult female is portrayed upside-down with raptorial legs stretched forward, perching on Licania tomentosa (Benth.) Fritsch. (‘oiti’), an arboreal species distinct from the Atlantic Rainforest and abundant within the general area where the female allotype was found. A male specimen is depicted flying, as they often are on the wings through adulthood. Scientific illustration executed by Paulo Ormindo, based on observations of wild specimens.