Etymology. The generic name Proteacoccus is formed from Protea  sp. ( Proteaceae  ), the genus of the host plant of the type species, and Coccus  , a name used frequently for scale insects. The name is masculine.

2). Neoplatylecanium adersi (Newstead)  . The species currently referred to as Neoplatylecanium adersi  was originally placed in the genus Lecanium  by Newstead (1917) but was transferred to Coccus  by De Lotto (1959). Later, Tang (1991) transferred it to Neoplatylecanium Takahashi 1929  , and then Avasthi (1993) redescribed it and made it the type species of his new genus Varshneococcus Avasthi. Since  then, it has been transferred back to Neo- platylecanium ( García Morales et al. 2019). Avasthi (1993) stated that preopercular pores are absent from the dorsum, whereas De Lotto (1959), based on the type specimens of L. adersi  from Maharubi, Tanzania, clearly describes and illustrates these pores as being present in several submedial groups on the abdomen. It is possible, therefore, that Avasthi (1993) was looking at a closely similar but different species. However, it is clear from the key below that, apart from having many (about 20) stigmatic spines in each stigmatic cleft, N. adersi  closely resembles Maacoccus bicruciatus (Green)  , the type species of the genus Maacoccus Tao & Wong  ( Tao et al. 1983). Both Neoplatylecani- um cinnamomi Takahashi  , the type species of Neoplatylecanium  , and M. bicruciatus  were redescribed by Hodgson (1994); it is here considered that L. adersi Newstead  is much more similar to M. bicruciatus  than to N. cinnamomi Takahashi  and is therefore here transferred to Maacoccus Tao & Wong  as Maacoccus adersi (Newstead)  , comb. n.

3). Coccus asiaticus Lindinger. The  species Lecanium caudatum Green 1896  was originally described from Sri Lanka on coffee. It was later transferred to Coccus  by Fernald (1903, 168). Thus, Coccus caudatum Green  became a secondary homonym of Coccus caudatus Walker 1852  , currently only known from Colombia. The name Coccus caudatus Green  was replaced by Lindinger (1932, 201) with a new specific name, Coccus asiaticus Lindinger. Since  then, Lecanium caudatum Green  was synonymized with Parasassetia nigra (Nietner)  by Tao et al. (1983, 76) and it is under this name that it is included in ScaleNet ( García Morales et al. 2019). However, De Lotto (1957) redescribed C. asiaticus Lindinger  (as C. caudatum Green  ), mainly based on specimens collected in Kenya and Uganda on coffee, although he also compared these specimens with Green’s type material from Sri Lanka in the BMNH, and concluded that they were conspecific. It is clear that the species redescribed and illustrated by De Lotto (1957) is not a synonym of P. nigra  and falls within Coccus Linnaeus  as currently understood, as was also suggested by Ben-Dov (1993). Unlike P. nigra  , C. asiaticus  (i) completely lacks a submarginal band of ventral tubular ducts; it also differs by having (ii) ventral tubular ducts present medially on the thorax (absent in P. nigra  ); (iii) 7-segmented antennae (rather than 8-segmented antennae); (iv) lacks dorsal polygonal areas throughout the dorsum (present in P. nigra  ); (v) it lacks submarginal tubercles and pocket-like invaginations (present in P. nigra  ), and (vi) has a tibio-tarsal articulatory sclerosis (absent in P. nigra  ). Type material of L. caudatum Green  has not been seen as part of this study but, based on De Lotto’s redescription and investigation, it is clear that C. asiaticus Lindinger  is not a synonym of P. nigra  , so L. caudatum Green  is here resurrected as Coccus asiaticus Lindinger (1932)  , revised status, and is included as such in the key below. Coccus asiaticus  was included under this name by Williams & Ben-Dov (2009) in their catalogue, but without comment. 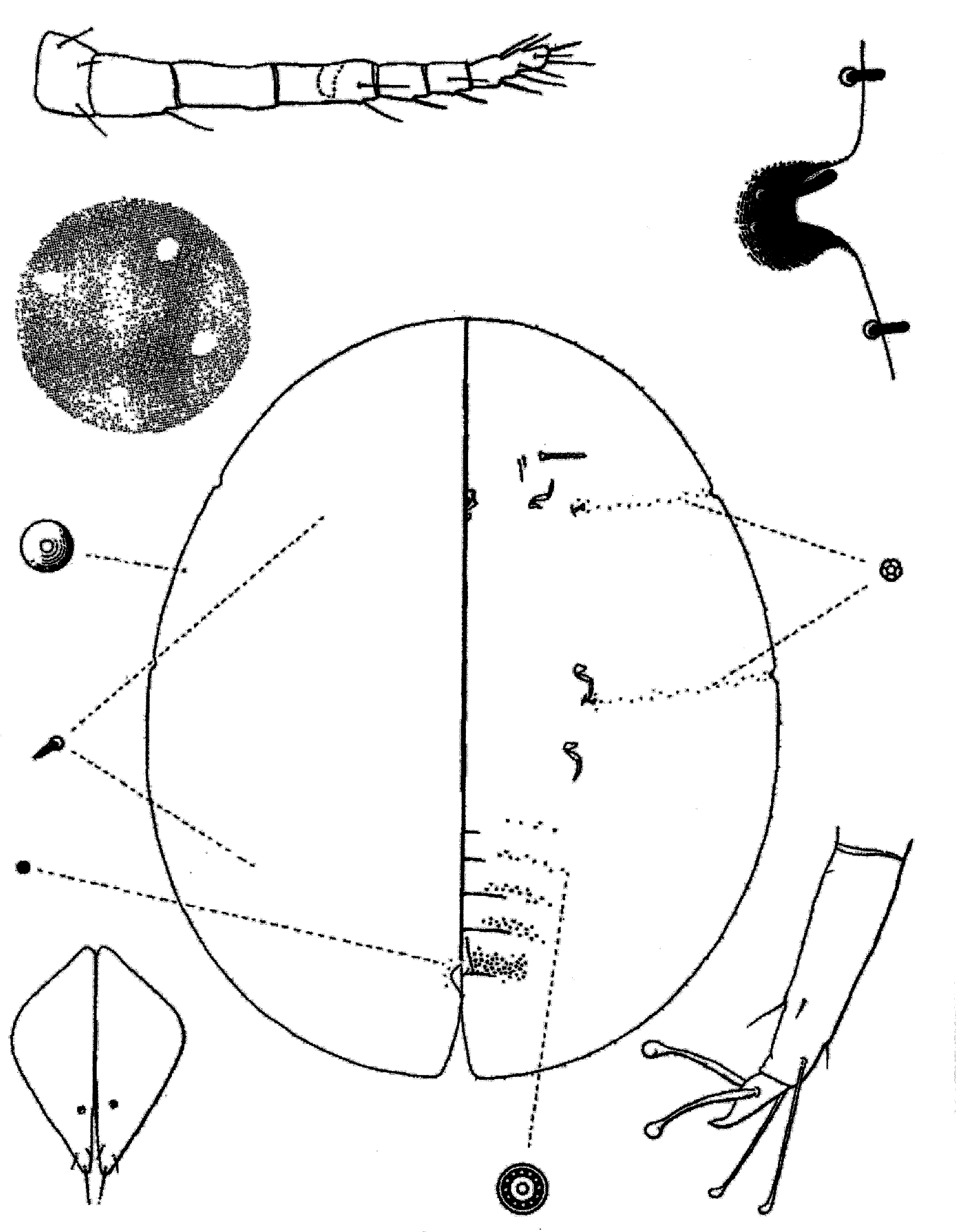