Diagnosis. The new species differs from all other species of Enyalioides   , except for E. praestabilis   , in having distinct caudal whorls, smooth or feebly keeled ventrals, fewer than 32 longitudinal rows of dorsals in a transverse line between dorsolateral crests at midbody, and in lacking projecting dorsal and limb scales. Males of the new species can be distinguished from E. praestabilis   by having larger scales on the ventral surface of the thighs ( Fig. 2 View Figure 2 ), and by having gulars with black margins ( Fig. 3 View Figure 3 ). The skin between gulars is black in some male specimens of E. praestabilis   , but gulars lack black margins. In addition, gular scales in males of the new species vary between bright orange and red, and there is no black mark on the gular region posteromedially; males of E. praestabilis   have cream or yellow gular scales, and some specimens have a black patch covering the gular fold and posteromedial portion of the gular region ( Fig. 3 View Figure 3 ). The new species usually has two femoral pores, whereas E. praestabilis   has normally one

Vertebral crest strongly projected and decreasing in size posteriorly, with vertebrals on neck at least four times higher than vertebrals between hind limbs; crest bifurcates posteriorly and extends onto tail about ¼ its length; body flanks between fore and hind limbs with dorsolateral and ventrolateral folds, as well as several oblique folds; scales on dorsolateral folds slightly larger than adjacent scales giving the fold the appearance of a crest; dorsal scales between dorsolateral folds and vertebral crest small, prominently keeled, and imbricate; scales on flanks (i.e., ventral to dorsolateral folds) similar in size to dorsal scales, with a few scattered enlarged scales 2–3 times larger than adjacent scales; ventral scales imbricate, smooth, rectangular, with a posterolateral mucron; ventrals more than twice the size of dorsals.

Limb scales keeled dorsally and smooth or slightly keeled ventrally; scales on dorsal and posterior aspects of thighs heterogeneous in size, with most scales less than half the size of those scales on anterior and ventral aspects; subdigitals on Finger IV 21; subdigitals on Toe IV 26; two femoral pores on each side; tail laterally compressed and gradually decreasing in height towards tip; caudal scales strongly keeled and imbricate, increasing in size posteriorly on lateral and dorsal aspects of each autotomic segment; ventral larger than dorsal caudals, with individual autotomic segments being three scales long ventrally and six scales long dorsally.

Color variation. Adult males QCAZ 8456, 8460 differed from the holotype in having a dark brown to black reticulate pattern on dorsal and lateral aspects of body. In addition, male QCAZ 8460 had the dorsal surface of head black with green and yellow dots; loreal and subocular regions with black and red scales; labials red with black margins; gulars red with black margins ( Fig. 3 View Figure 3 ). Metachromatism was observed in some individuals, in which the green tones were replaced with yellow or brown tones ( Fig. 4 View Figure 4 ).

Natural history. Juvenile QCAZ 8454 was encountered at 5 pm basking in the sun on the ground; when approached it ran quickly into a hole 5 cm wide located 1 m higher in the ground. All other specimens were found sleeping at night (7:00 pm– 12:00 am) between 30 cm and 2.5 m above ground. These specimens were found with their heads facing up on vertical stems with diameters varying between 2–10 cm, or lying horizontally on ferns with stems 2–3 cm wide. Most specimens were collected in secondary forest close to pasture.

Distribution. Enyalioides rubrigularis   inhabits rainforests on the eastern slopes of the Andes and western slopes of Cordillera del Cóndor in southern Ecuador (Fig. 5). It occurs at elevations of 1100–1460 m in the upper basins of the Zamora and Nangaritza rivers, Provincia Zamora Chinchipe. Th e type locality of E. rubrigularis   is surrounded by secondary forest, pasture, Tilapia   ponds, and bullfrog ( Rana catesbeiana   ) farms.

Etymology. The name rubrigularis   is an adjective in the nominative singular and derives from the Latin words ruber (=red) and gula (=throat). It refers to the characteristic orange or reddish throat and chin of adult males, which distinguishes the new species from other species of Enyalioides   . 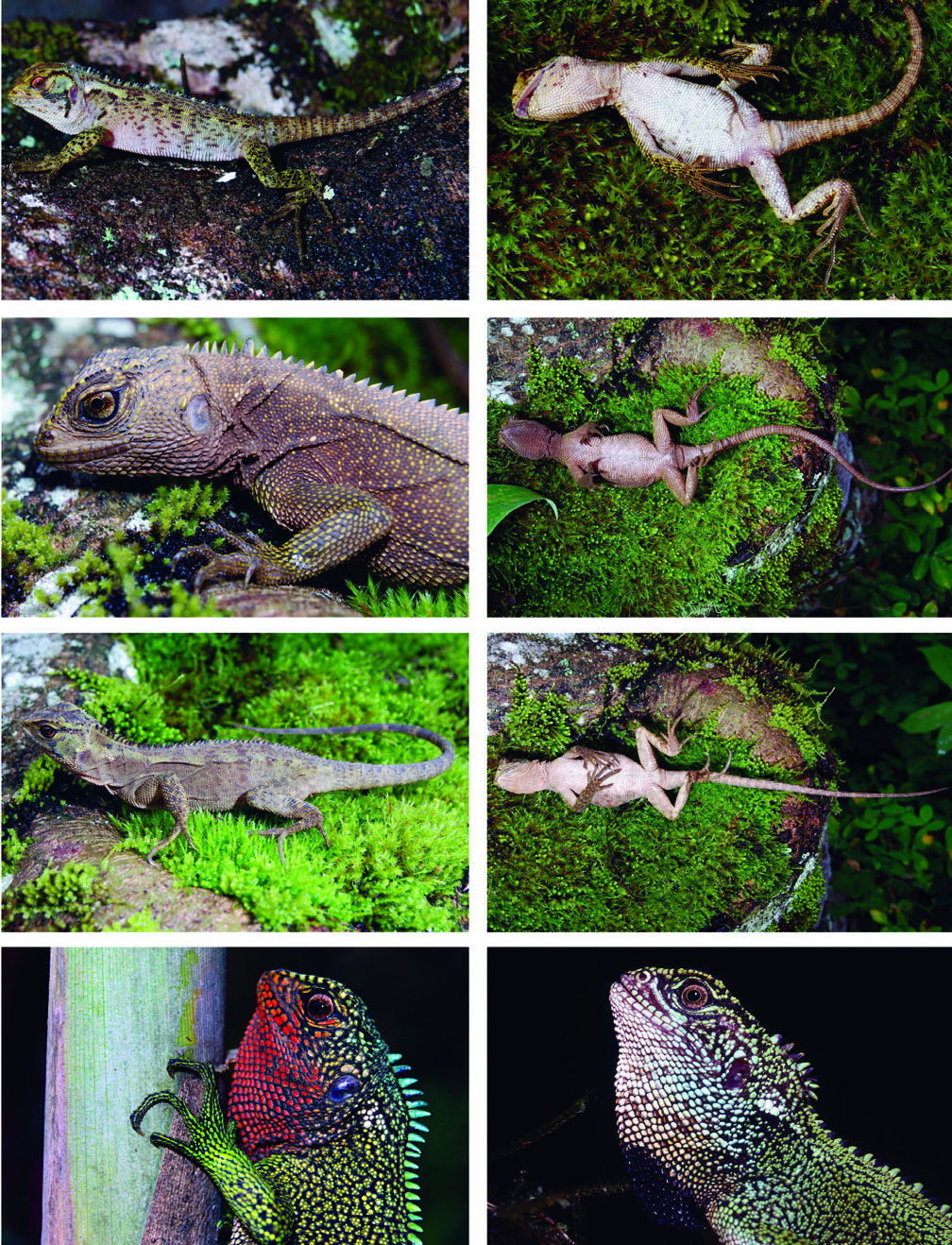