Morphology. Male (in parentheses some measurements of two conserved specimens): Idiosoma L/W 516 / 472; surface of coxae and appendages with a fine regular porosity, surface of idiosoma shield (Fig. 5 A) covered by group of these pores, each joined to a larger subcutaneous cavern by fine channels; dorsal furrow incomplete (dorsal shield posteriorly fused with ventral shield), dorsal shield maximum W 350; a stripe of idiosoma surface with large pores lying between the medial nargins of Cx-III/IV as well between the margins of Cx-II and -III; capitular bay shallow; distinct, nose-shaped projections associated with the insertions of IV- Leg; genital field completely lacking surface porosity, but many acetabula in the genital field linked in a similar manner as the idiosomal pores in groups of two to four each to subcutaneous cavern; gonopore short and narrow, L 57, acetabular plates L/W, 155 – 158 / 112, ratio 1.4; palp (Fig. 7 A – B): total L 182, L and %L (in parentheses): P-1, 22 (12.1); P-2, 51 (28.0); P-3, 34 (18.7); P-4, 56 (30.1); P-5, 19 (10.4); palp with eight stout setae on the medial surface of P- 2, P- 4 with slender seta inserted at the base of the ventrodistal extension of the segment, P- 5 relatively short and directed medially; gnathosoma L 118; chelicera total L 108. Legs: L of I- L- 5 – 6 (Fig. 7 C): 90, 99.

Remarks. Four species of Wuria so far has been described: Wuria falciseta K. Viets, 1916 from continental Africa, W. sumatriensis K. Viets, 1935 from Sumatra ( K.Viets 1935), Wuria boutit Harvey, 1989 from Northern Teritorry, Australia ( Harvey 1989) and W. millioti Gerecke, 2004 from Madagacar ( Gerecke 2004 b). Each of these species is represented by a few specimens and the male of W. sumatrensis was unknown so far.

Due to the presence of a stripe of sclerite surface with larger pores lying between the medial margins of Cx-III/IV as well between the margins of Cx-II and -III, relatively wider acetabular plates (L/W ratio 1.2) and a slender palp, the specimens from India show general conformity with Wuria sumatrensis, a species described from a lake in Sumatra and later reported from New Guinea by Wiles (1997 b). The illustrated female specimen differs in slightly more elongated gonopore, but two other conserved specimens have a more roundish gonopore and agree perfectly with the original description. However, this is only a tentative assignment and a more certain designation requires males from Sumatra ( Wiles 1997 b). New for the fauna of India. 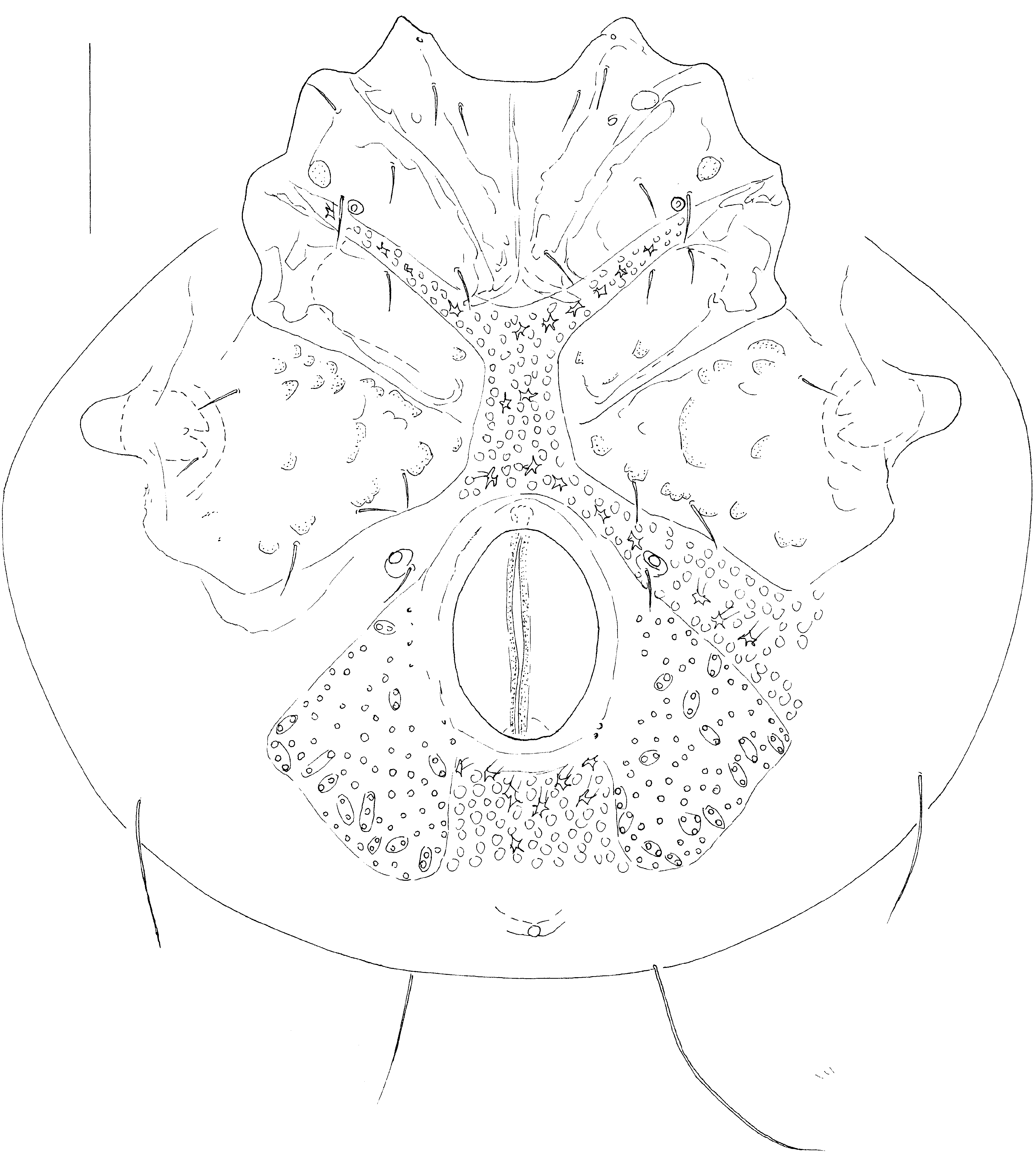