ETYMOLOGY. — An adjective formed from the Latin diminutive of pinguis which means fat, plump alluding to the profile of the shell.

Shell small, spindle-shaped, translucent white with a brownish, styliform protoconch of two whorls. Teleoconch of a little more than three whorls, the first one markedly enlarged with respect to the protoconch and ascending over it so as to conceal partly the last protoconch whorl, the second one inflated, the third one elongate, forming more than 70% of the total shell height, slightly convex. Suture closely appressed, distinct, the suture internally visible by transparency but fuzzy. Sculpture of fairly evident growth lines. Base attenuated, imperforate; aperture elongate, the outer lip simple, forming a regular arch in side view, inner lip forming a thin, regular callus along the parietal area, then slightly bulging along the columellar area; basal part of the aperture slightly receding. Dimensions of holotype: 3.3 mm height × 1.3 mm diameter; of paratype: 3.4 × 1.3 mm.

Bouchet & Warén (1986: 448-449) reported a species of Mucronalia in Portuguese  waters from one specimen (broken), and assigned it to Mucronalia mammillata Dall, 1927  , described from deep water off southeastern United States. They further synonymized M. suava Dall, 1927  , described in the same paper. The specimen figured by Bouchet & Warén was stated to be a “ paratype of M. mammillata  ”, but this contradicts Dall’s (1927) statement of a single specimen; this specimen was probably added to the United States National Museum ( USNM) collection posteriorly to the description (Ellen Strong, pers. comm. 2018) and has no type status, although it agrees well with the holotype ( Fig. 9 AView FIG). Dall (1927) described M. mammillata  as having a single protoconch whorl, and M. suava  ( Fig. 9 B, CView FIG) as having two, but the difference in protoconch whorl count is not obvious on the actual specimens. Mucronalia mammillata  is larger than M. pinguicula  n. sp. (holotype 3.7 mm, figured specimen in Bouchet & Warén (1986), 5.1 × 1.6 mm according to scale bar) and has a definitely more slender last teleoconch whorl. Mucronalia suava  is also larger, and the spire angle is much less increased at the transition from protoconch to teleoconch. Our conclusion is that three different species are involved. The holotype of M. pinguicula  n. sp. was live-collected and is presumed to be full-grown as deduced from the sturdy outer lip with a well rounded, not thinning, edge.

We agree with Bouchet & Warén (1986) that the resemblance of the abovementioned species with the type species of Mucronalia  , the Japanese M. bicincta A. Adams, 1860  , based on the abrupt change of spire angle from protoconch to teleoconch, may be superficial but that introducing a new genus is not advisable at the present state of knowledge. 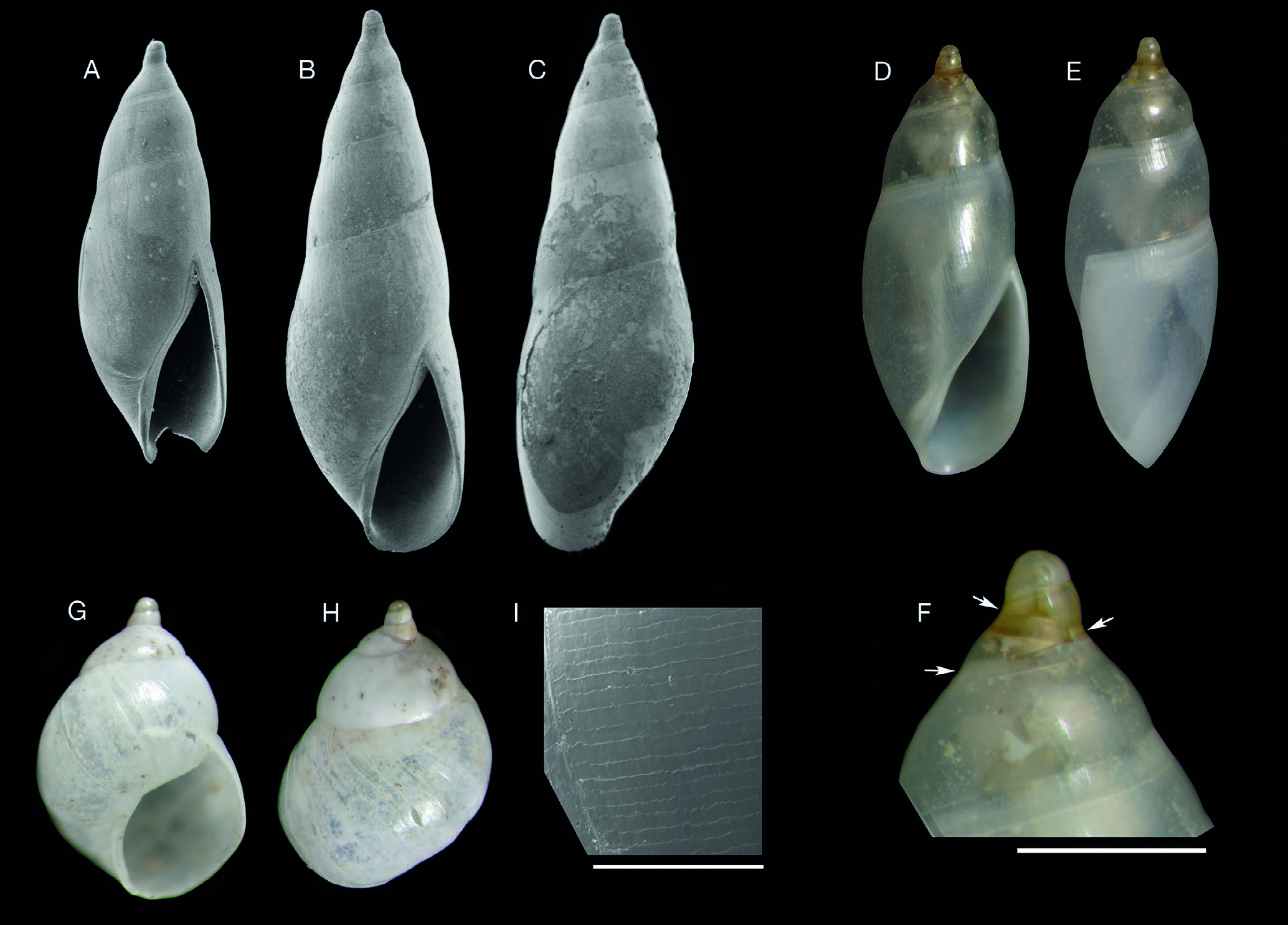