IDENTIFICATION: Jaguars are unmistakble externally ( Emmons, 1997), and their skulls can be distinguished cranially from those of pumas (the only other large Amazonian cat) by nonoverlapping measurements (e.g., condylobasal length, zygomatic width; Husson, 1978); therefore, identification is not problematic. Rumors have long existed, however, of large Amazonian cats thought (by some) to represent one or more undescribed species of Panthera . Recent morphometric analyses of two skulls from eastern Peru alleged to represent such cryptic taxa suggest that they are simply jaguars, albeit perhaps with unusual coat-color phenotypes (Naish et al., 2014). Size variation among the eastern Peruvian material we examined is bracketed by a small female from the Río Cenepa ( AMNH 98679) and a large individual (sex unrecorded but probably male) from the Río Aguaytía ( AMNH 147513): condlyobasal length, 190.5–240.5 mm; least interorbital breadth, 39.8–50.3 mm; least postorbital breadth, 42.4–50.4 mm; zygomatic breadth, 148.9–174.1 mm; length P4, 25.6–30.2 mm.

Numerous subspecies of the jaguar have long been recognized (e.g., by Wozencraft, 2005). The western Amazonian population was referred to the nominotypical form in the last specimenbased revision (Pocock, 1939), but jaguar “subspecies” seem not to correspond either to mtDNA phylogeographic units ( Eizirik et al., 2001) nor to geographic variation in cranial measurements ( Hoogesteijn and Mondolfi, 1996), so it is not clear that any purpose is served by a trinomial nomenclature of these cats.

ETHNOBIOLOGY: In addition to the term bëdi, the Matses have three archaic synonyms that refer to the jaguar. The first, kamun (an unanalyzable term commonly encountered among other Panoan languages), like bëdi, can also refer collectively to members of the category that includes all felids, wild canids, and the tayra. A second archaic synonym, winsad, specific to the jaguar, also means “frightening.” The third archaic synonym, chuisad, also specific to the jaguar, is not analyzable and has no other current meaning. In the language used in the Matses’ komok ceremony, the jaguar is called mëndu, a monomorphemic terms that also designates the domestic dog.

Because bëdi can refer to any felid, or can be used generically, the term bëdidapa (literally “large jaguar/felid”) is used to specify the jaguar, although it can also refer to a Matses-recognized variety of the jaguar. In fact, there are two over- differentiated varieties: bëdidapa and wispan kamun (“jaguar of the stars,” in reference to its particular spotted pattern). The wispan kamun variety is said to be fiercer and to have a larger head and a smaller body than the typical variety. Interestingly, melanistic jaguars seem to be absent in Matses territory. Men who have travelled outside Matses territory have heard of them, but the Matses have no names for them.

Jaguars are not currently of any economic importance to the Matses. They are not eaten, nor are they kept as pets. Several decades ago some Matses hunters participated in the illegal fur trade, trapping jaguars and other cats in box traps made from split palm logs and baited with capuchin monkey meat.

All Matses (especially women and children) fear jaguars, which often stalk people without attacking them. Although jaguars usually run away when they are encountered, occasionally a jaguar will bound toward a person. When they do so, the animal can sometimes be scared off by yelling loudly or by pounding on a buttress root. However, these tactics do not always work, and many Matses hunters tell of having to defend themselves with shotguns, arrows, or sticks. There have been a few isolated cases of jaguars killing men, women, and children in the forest, and there have been two instances within the last 40 years of a jaguar entering a Matses village and attacking people. Jaguars often kill Matses hunting dogs.

The Matses believe that if one kills, touches, or even looks at a jaguar, the spirit of the jaguar can make their child ill. The principal symptoms of jaguar-induced illness are a fever and constant thirst for water (jaguars are characterized by the Matses as drinking water constantly while eating meat). Several plants known as “jaguar/felid” medicine can be used to cure jaguar sickness. The child is bathed with an infusion of their leaves. If hunter has had contact with or seen a jaguar, he will collect these medicinal plants to treat his children prophylactically.

The Matses have two clans, the jaguar clan and caterpillar clan. If a jaguar whines within hearing range of a Matses household, the Matses say that it is announcing that someone of the jaguar clan will soon die.

Jaguars are mostly terrestrial, but they also climb trees. Although jaguars can be found in any habitat, including upland forest and floodplain forest, they are most often encountered along rivers and streams. Another favorite habitat is forest whose understory is dominated by the stemless palm Attalea racemosa (according to one informant, the palms provide cover, and this habitat is otherwise free of obstructive undergrowth). Jaguars are rarely encountered, but their tracks on river beaches and claw marks on trees are seen frequently. They are especially common on the banks of the Yaquerana (upper Río Yavarí).

Jaguars are nocturnal and diurnal. They travel very far, to other large streams. They spend much of their time walking slowly, searching for prey, or waiting to ambush prey. They sleep in hollow logs, hollow trees, cavities in the banks of stream headwater gullies, or between buttress roots, but not in the open. A jaguar does not sleep in the same place on consecutive nights, unless it is a female that has just given birth to cubs. However, a jaguar may return to a sleeping place after several days or more. Jaguars rest up in trees, in a sunny spot, or in or beside a treefall. Jaguars scratch trees and fallen logs, leaving claw marks that the Matses often find. Tonnad trees (species of Myristicaceae ) are those most frequently found with jaguar claw marks.

Jaguars are solitary. The female gives birth to two cubs in a hole in a stream headwater gully or in a hollow log. At the entrance of the hollow log where it gives birth, the ground is swept clear. The female brings meat back to the den for the cubs to eat.

Jaguars wait beside tapir trails and follow tapir paths. When the tapir comes walking by, the jaguar pounces on it, grabs it with its claws, bites the back of its head and eats it. If the tapir runs, the jaguar chases it and grabs it. The pursued tapir may plunge into a stream, but the jaguar can kill it while it is still submerged, and will eat it right in the streambed. Jaguars also wait for tapirs and other prey at mineral licks. The jaguar also walks where there are no paths. It stalks collared peccaries without rustling the leaves as it walks. It captures the peccary by grabbing it with its claws and biting its head. It does likewise with deer. It ambushes monkeys up in trees. It kills most of its prey by biting the head.

After killing an animal, the jaguar begins to eat it right away. It eats the intestines first and laps up the blood. If the prey is not a small animal, the jaguar will hide part of the kill, covering it with leaf litter at the base of a tree. It may hide the meat in more than one stash. It drinks a lot of water after eating its fill of meat. After drinking, it lies down to rest near its stash. After resting it eats some more. Before it is all done, it hunts again. If it does not kill anything else, it comes back to eat more. It may return to eat the bones last.

The jaguar growls when it attacks. It has a very loud whining roar that can be heard from far away, day or night.

REMARKS: Matses observations about jaguars are consistent with an emerging consensus about the distinctive trophic role of these top predators in Amazonian ecosystems. Whereas jaguar diets in subtropical and semiarid landscapes broadly overlap those of sympatric pumas (Taber et al., 1997; Núñez et al., 2000), Amazonian jaguars often eat armored reptiles and large mammals that are seldom taken by pumas. Such prey are thought to be uniquely vulnerable to jaguars because these cats have adaptations for durophagy that allow them to bite through reptilian armor and heavily ossified mammalian skulls (Schaller and Vasconcelos, 1978; Emmons, 1989; Miranda et al., 2016). Other prey commonly taken by Amazonian jaguars, but not (or less often) by other sympatric cats, include aquatic and semiaquatic taxa that jaguars hunt by patrolling river beaches and lakeshores ( Emmons, 1987; Silveira et al., 2010).

The prey species that Matses interviewees report to be eaten by jaguars but not by pumas—notably giant armadillos, giant anteaters, tapirs, adult white-lipped peccaries, capybaras, tortoises, river-turtle eggs, and fish ( table 11 View TABLE 11 )—exemplify both aspects of this hypothetically distinctive niche (defined by durophagy and riparian/aquatic foraging). However, Matses descriptions of jaguar behavior also extend our knowledge of the remarkable predatory abilities of this species, which has not previously been reported to kill tapirs under water. That jaguars routinely patrol trails is well known, but the Matses say that jaguars also hunt in trailless parts of the forest (contra Weckel et al., 2006). An apparently novel observation is occasional frugivory, which seems not to have been reported in any previous analysis of jaguar diets. 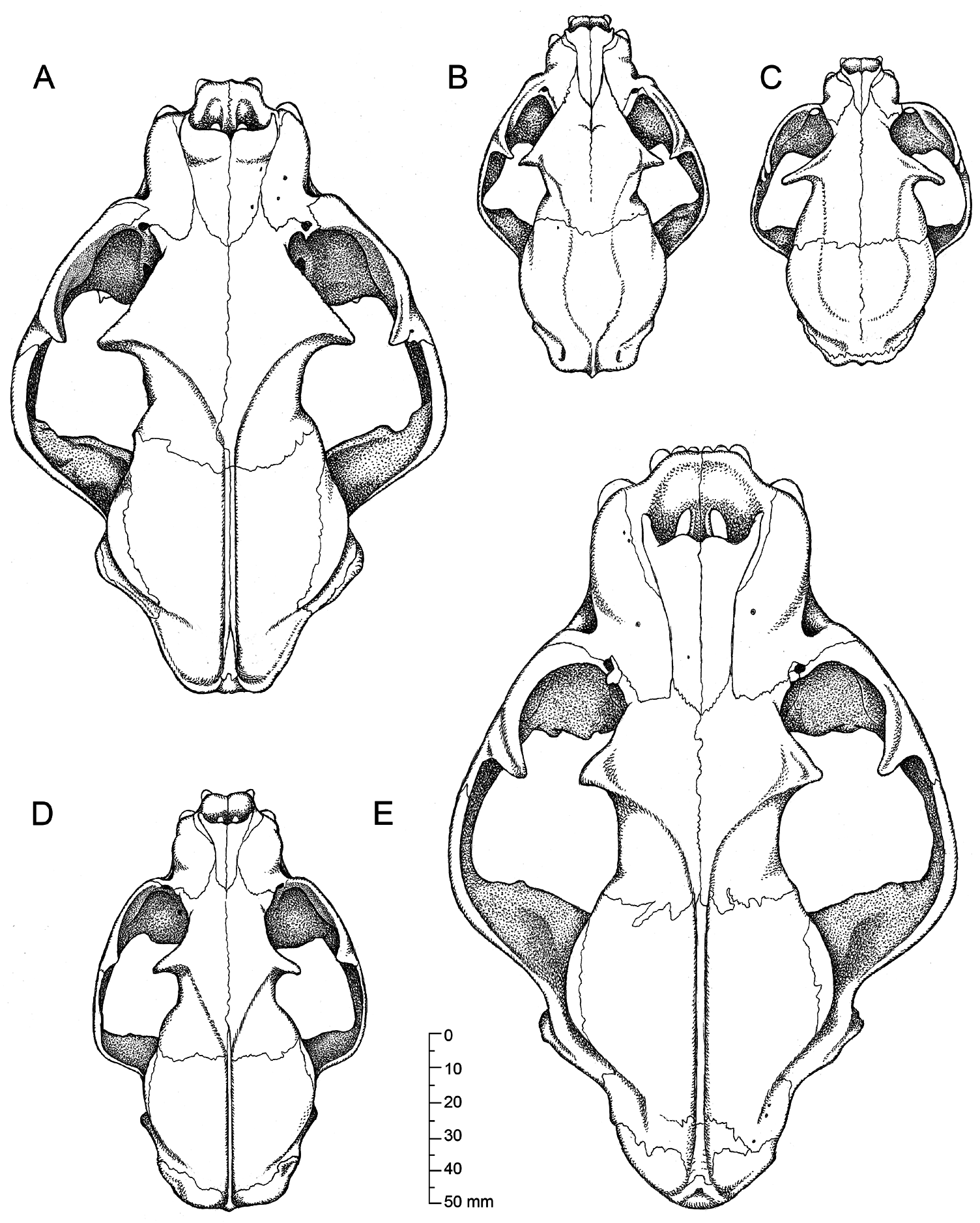