Diagnosis. Charinus santanensis  differs from other species of the genus by having the following combination of characters: median and lateral eyes developed; pedipalp with femur with 5 or 4 dorsal and 5 ventral spines, patella with 6 dorsal and 4 or 3 ventral spines, and dorsal tibia with spine 2 being two to three times larger than the spine 1; distitibia of leg IV with 18 trichobothria; male gonopods with Pi and LoL1 forming several long lobes, LoL2 and LoD drop-shaped, with LoD larger than LoL2, and LaM forceps-shaped.

Description. Carapace ( Figs. 16–18View FIGURES 16 – 20): Flattened. Ratio length/width slightly more than 3/4. Anterior margin rounded, with corners flattened downwards. Six strong setae on the anterior margin projected upwards. Frontal process triangular, with acute apex slightly pointing forwards, longer than wide and visible in dorsal view. Portions above the coxa of legs I slightly curved upwards. Carina begins at the corners of the anterior margin and extends from the coxa of legs II to the corners of the posterior margin. Median eyes developed with high tubercle, located in a small depression. Lateral eyes developed, with little pigmentation and with 1 small posterior seta. Fovea ovate and located posterior to the center. Punctuations in lines and spots.

Chelicera ( Fig. 20View FIGURES 16 – 20): Cheliceral furrow with 4 inner teeth in the basal segment. The distal tooth is bifid, with the distal cusp being larger than the proximal. Teeth length: IV>Ia> Ib =II>III. Claw with 8 denticles. Several strong setae distally on the dorsal side of the chelicera.

Pedipalp ( Figs 21, 22View FIGURES 21 – 23): Trochanter: Ventral spiniform apophysis with a series of strong setiferous tubercles. Two spines of subequal size aligned on the prolateral surface, the first being near to the medial region, and the second dorsal to the projection of the apophysis and close to the spine AI of the femur. Dorsal series of strong setae. Femur: Strong dorsal setae and two dorsal setiferous tubercles on the basal portion. Five dorsal spines (4 in the paratype) of sizes: F1>F2>F3>F4>F5. Five ventral spines of sizes: FI>FII> FIII >AI>FIV. One secondary spine on ventral side of the right pedipalp of the holotype close to the FIV. Patella: Strong dorsal setae among the spines. Six dorsal spines of sizes: 1>2>3>A1>4>5. Strong ventral setae. Four ventral spines (3 in the paratype) of sizes: I>II>III>IV. One secondary spine on ventral side of the left pedipalp of the holotype close to the spine III. Tibia: Densely setose. Two dorsal spines, with spine 2 being two to three times larger than the spine 1. One ventral spine located in the distal half about the same size of the dorsal spine 1. Distitarsus: Densely setose. Two spines above the cleaning organ, the second being about two times larger than the first spine. Cleaning organ occupies about half of the article length. Claw: Long with sharp curved tip.

Genitalia: Male ( Figs. 27, 28View FIGURES 24 – 28): Margin of GO rounded with a few scattered setae. Genital organ wider than long. Longitudinal split occupies about 2/3 of the genital organ. Fi slightly exceeds the genital operculum margin. Sclerotized bands of the Fi with a half circle form. Pi and LoL1 shaped like several long lobes. LoL2 and LoD drop-shaped, with LoD larger than LoL2. LoL2 and LoD cannot be seen ventrally. LaM forceps-shaped and located medially and ventrally to the Fi.

Etymology. The specific epithet is a reference to “Santana”, the municipality where the species inhabits.

Natural history ( Figs. 29, 30View FIGURES 29 – 30). The Gruta do Padre cave comprises one of the biggest known and well preserved caves in Brazil (the third in extension). It presents 16,400 meters of horizontal projection and is part of one of the most extensive subterranean hydrological systems in Brazil ( Auler et al. 2001). The cave has three distinct levels and a river in the lowest level. The two collected specimens of C. santanensis  sp. n. were found in a big chamber in the upper level of the cave, located around 250 meters from the main cave entrance. Although far from the river, the substrates were moist due to the high humidity in the chamber. The specimens were found on rock blocks covered by a thin moist mud layer. The encounter of both specimens was incidental, and both were close to the main pathway inside the cave. Accordingly, it is not possible to infer any aspects of their population (e.g. density or size) and distribution. More detailed searches should be done in this cave in order to get more information about this species ecology. The place they were found (relatively close to the entrance) and the lack of any troglomorphic traits suggest they are not troglobitic, but rather troglophilic. However, the Gruta do Padre cave is a shelter for some troglobitic species: Coarazuphium tessai (Godoy & Vanin, 1990)  ( Coleoptera  : Carabidae  ), Spelaeogammarus santanensis Koenemann & Holsinger, 2000  ( Amphipoda  : Artesiidae  ) and Phaneromerium cavernicolum Golovatch & Wytwer, 2004  ( Polydesmida  : Fuhrmannodesmidae  ). 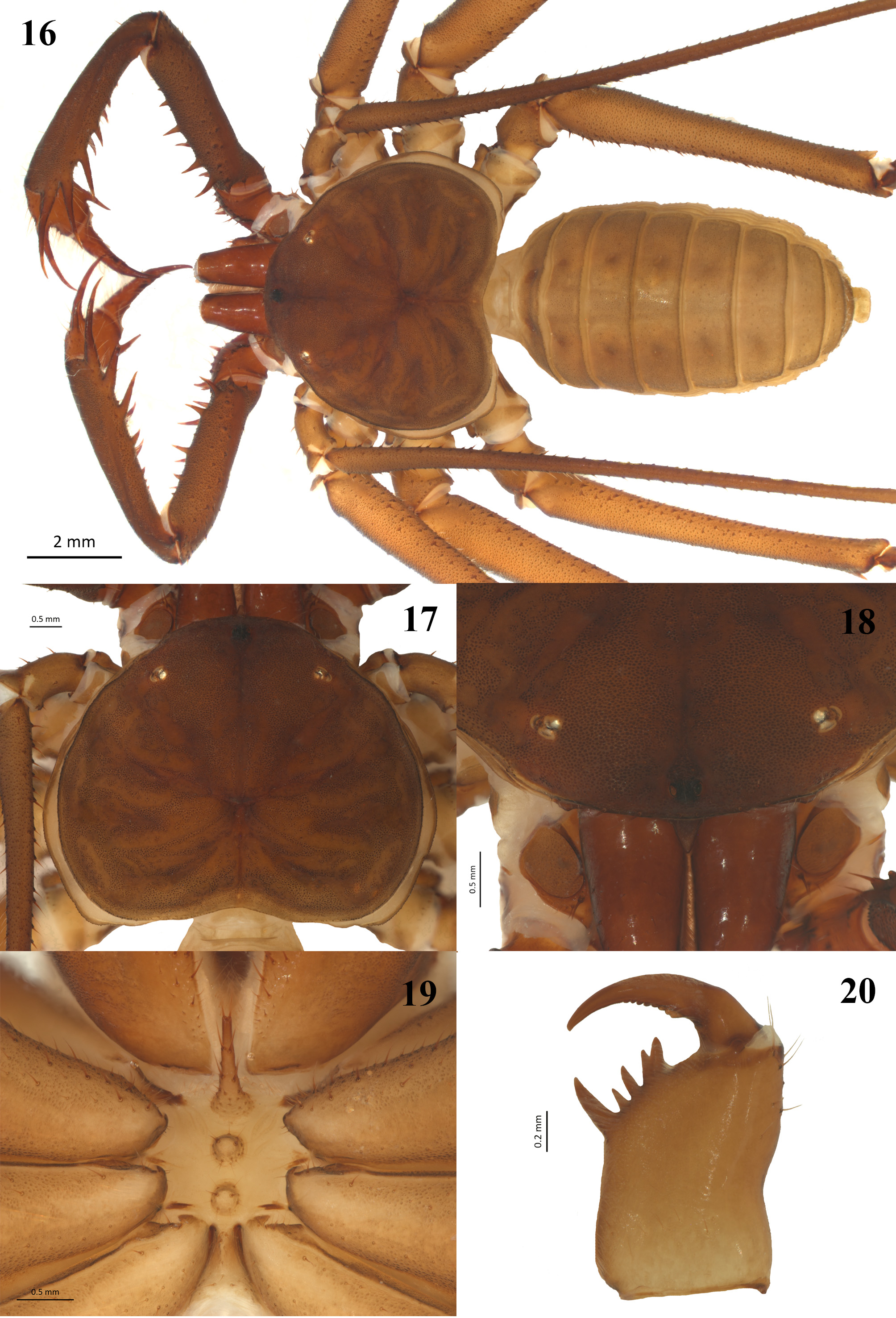 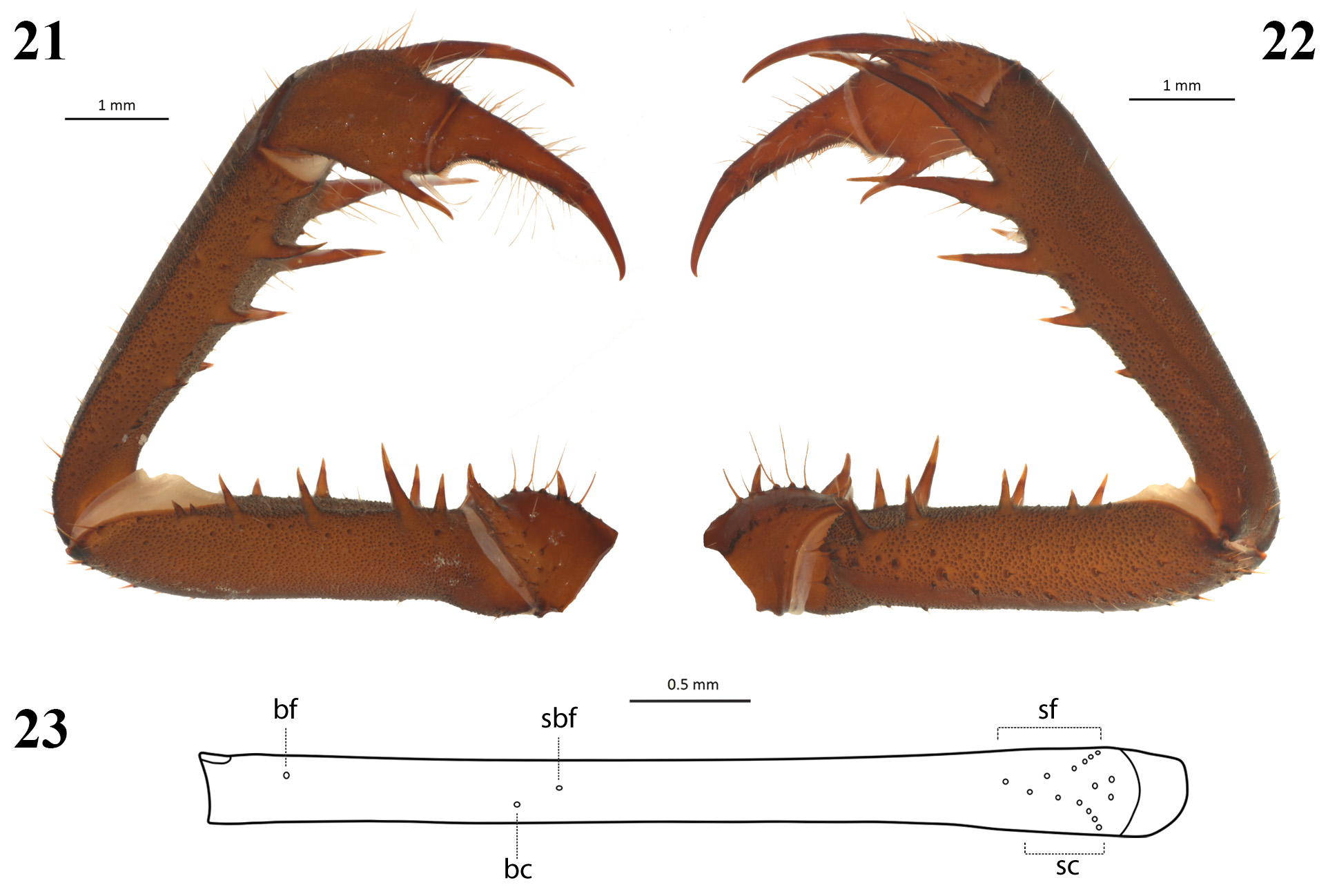 FIGURES 29 – 30. Views from inside the Gruta do Padre cave (habitat of Charinus santanensis sp. n.).