Diagnosis. Charinus spelaeus  differs from other species of the genus by having the following combination of characters: median eyes reduced to small eyespots with tubercle indistinct, lateral eyes underdeveloped; second (tetrasternum) and third segment (pentasternum) of the sternum wider than long; distitibia of leg IV with 16 trichobothria; female gonopods sucker-like with a slit in each gonopod structures on the opposite portion to the operculum margin; male gonopods with Pi and LoL1 claw-shaped.

Description. Carapace ( Figs. 1–3View FIGURES 1 – 5): Flattened. Ratio length/width approximately 3/4. Anterior margin rounded, with corners flattened downwards. Six strong setae on the anterior margin projected upwards (5 are found in one specimen). Frontal process triangular-shaped, with acute apex, longer than wide, and visible in dorsal view in some specimens. Carina begins at the corners of the anterior margin and extends from the coxa of legs II to the corners of the posterior margin. Median eyes reduced to small eyespots with tubercle indistinct, located in a small depression. Lateral eyes underdeveloped, without pigmentation, and with 1 small posterior seta. Fovea rounded and located posterior to the center. Punctuations in lines and spots, denser in the anterior region.

Chelicera ( Fig. 5View FIGURES 1 – 5): Cheliceral furrow with 4 inner teeth in the basal segment. The distal tooth is bifid, with the distal cusp being larger than the proximal. One of the specimens has the second tooth bifid instead of the first ( Fig. 10View FIGURES 9 – 11). Teeth length: IV>Ia> Ib>II>III. Claw with 6–9 denticles (in some specimens the basal and medial denticles are fused). Strong setae distally on the dorsal of the chelicera.

Pedipalp ( Figs 6, 7View FIGURES 6 – 8): Trochanter: Ventral spiniform apophysis with a series of strong setiferous tubercles. Two long subequal spines aligned on the prolateral surface, the first being near to the medial region, and the second dorsal to the projection of the apophysis and close to the spine AI of the femur. Two specimens lack the first spine.

Dorsal series of strong setae. Femur: Strong dorsal setae and two dorsal setiferous tubercles on the basal portion. Four (3 in some paratypes) dorsal spines of sizes: F1=F2>F3>F4. Four (5 in some paratypes) ventral spines of sizes: FI>FII> FIII >AI. AI of the left pedipalp is bifurcated in the holotype and in one paratype. Some secondary spines can be found in both dorsal and ventral sides of the femur. Patella: Strong dorsal setae among the spines. Six (5 in some paratypes) dorsal spines of sizes: 1>2>3>A1=4>5. Strong ventral setae. Three (4 in some paratypes) ventral spines of sizes: I>II>III. Tibia: Densely setose on the dorsal side. Two dorsal spines, spine 2 being almost twice larger than the spine 1. The spine 2 on the right pedipalp is smaller than in the left pedipalp of the holotype. One ventral spine located in the distal half about the same size of the dorsal spine 1. Distitarsus: Densely setose. Two spines above the cleaning organ, the second being almost twice larger than the first spine. In two specimens, the distitarsus and claw are anomalous, presenting only one spine in one of the specimens ( Fig. 11View FIGURES 9 – 11) and three spines in the other. Cleaning organ occupies about half of the article length. Claw: Long with sharp curved tip.

Legs ( Fig. 8View FIGURES 6 – 8): All densely setose. Femur lengths: I>III>II>IV. Leg I: Tibia with 23 articles and tarsus with 41 articles. Leg IV: Basitibia with 4 pseudo-articles. Left basitibia of the holotype does not have the BT2 completely separated from the BT1. One trichobothrium located proximally on the BT4 (it is located closer to the middle of the article than in C. santanensis  sp. n.). Distitibia: Three trichobothria positioned proximally, with trichobothrium bc much closer to sbf than to bf. Thirteen trichobothria positioned distally, with sf and sc with 5 trichobothria each. Basitibia-distitibia length: DT=BT1>BT4>BT3>BT2. Ratio tarsus/metatarsus is a little less than 3/4. Tarsus composed of 4 segments.

Genitalia: Female ( Fig. 24View FIGURES 24 – 28): Rounded genital operculum margin with some strong setae. Gonopods suckerlike, barrel shaped and longer than wide. Gonopods opening rounded, with a slit in each gonopod structures on the opposite portion to the operculum margin, and with a slight bottleneck below the edges. Gonopods separated from each other by a larger distance than the diameter of the basis of each one and from the margin of the operculum by a larger distance than their length. Male ( Figs 25, 26View FIGURES 24 – 28): Margin of GO rounded with a few scattered setae. Genital organ longer than wide. Longitudinal split occupies about half of the genital organ. Fi slightly exceeds the margin of the GO. Sclerotized bands of the Fi with a “V” form. Pi and LoL1 claw-shaped. LoL2 and LoD cannot be seen ventrally and clearly. LaM located medially and ventrally to the Fi.

Etymology. The epithet specific means “cave” in Latin, in reference to the habitat where the species lives.

Natural history ( Figs. 12–15View FIGURES 12 – 15). The Lapa d’Água cave comprises a limestone cave associate to the Bambuí geological group. It has 660 meters of horizontal projection and a single conduit, which is trespassed by an intermittent stream. Around 50 meters from the entrance there is a constriction on the conduit, which causes the inner portion of the cave to become moister and more stable in temperature, even in dry and cold periods. Specimens of C. spelaeus  sp. n. were found after the conduit constriction, becoming more abundant in deeper areas of the cave. At least 20 specimens were observed during the visit to the cave. Potential preys include juvenile crickets ( Endecous  sp.), cockroaches and moths. The external area around the cave is well preserved, and since the cave is not easily accessed, there are no signs of human visitation. At least five other caves in the region were sampled and no specimens of C. spelaeus  sp. n. were found, which indicates that this species is probably restricted to Lapa d’Água cave. 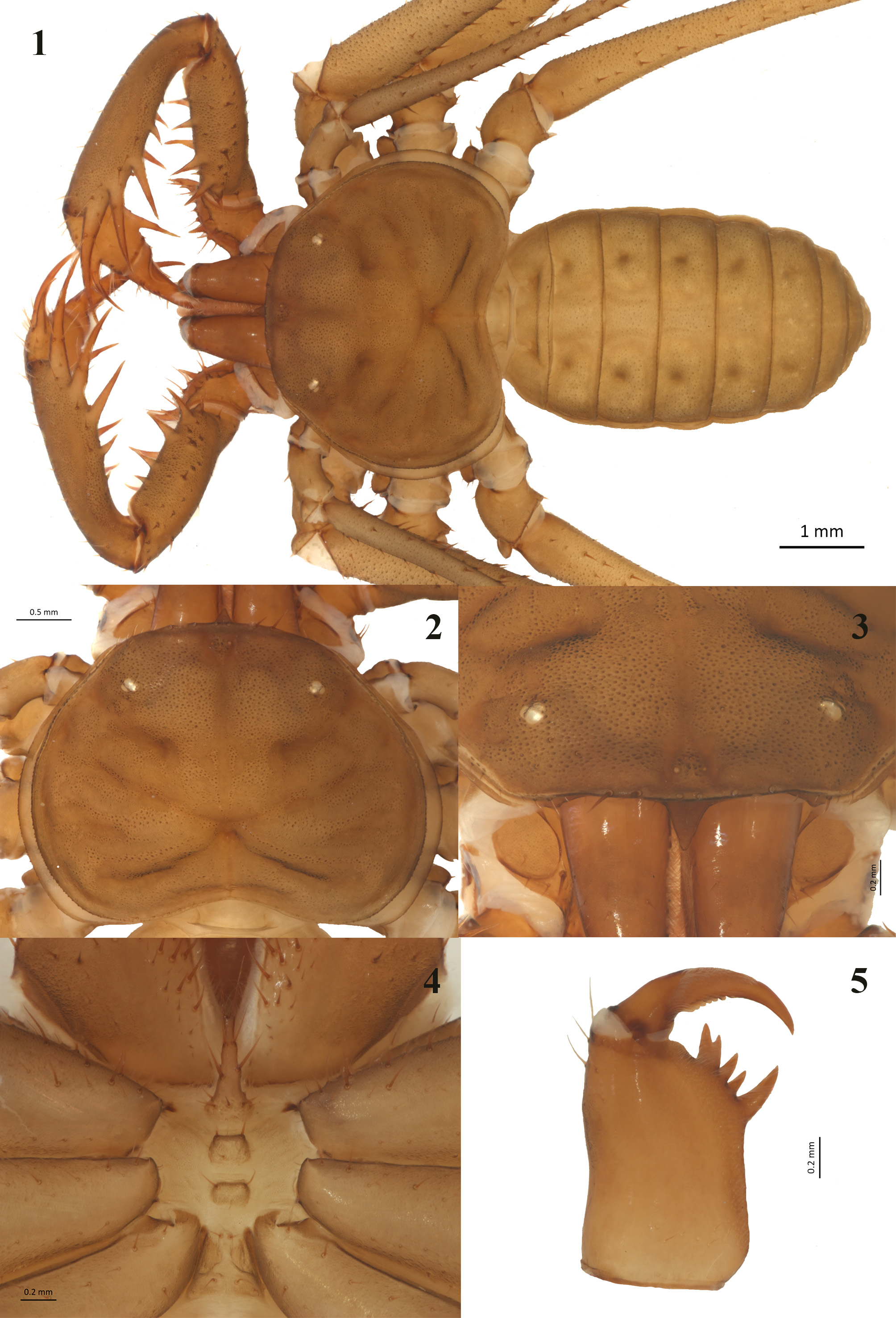 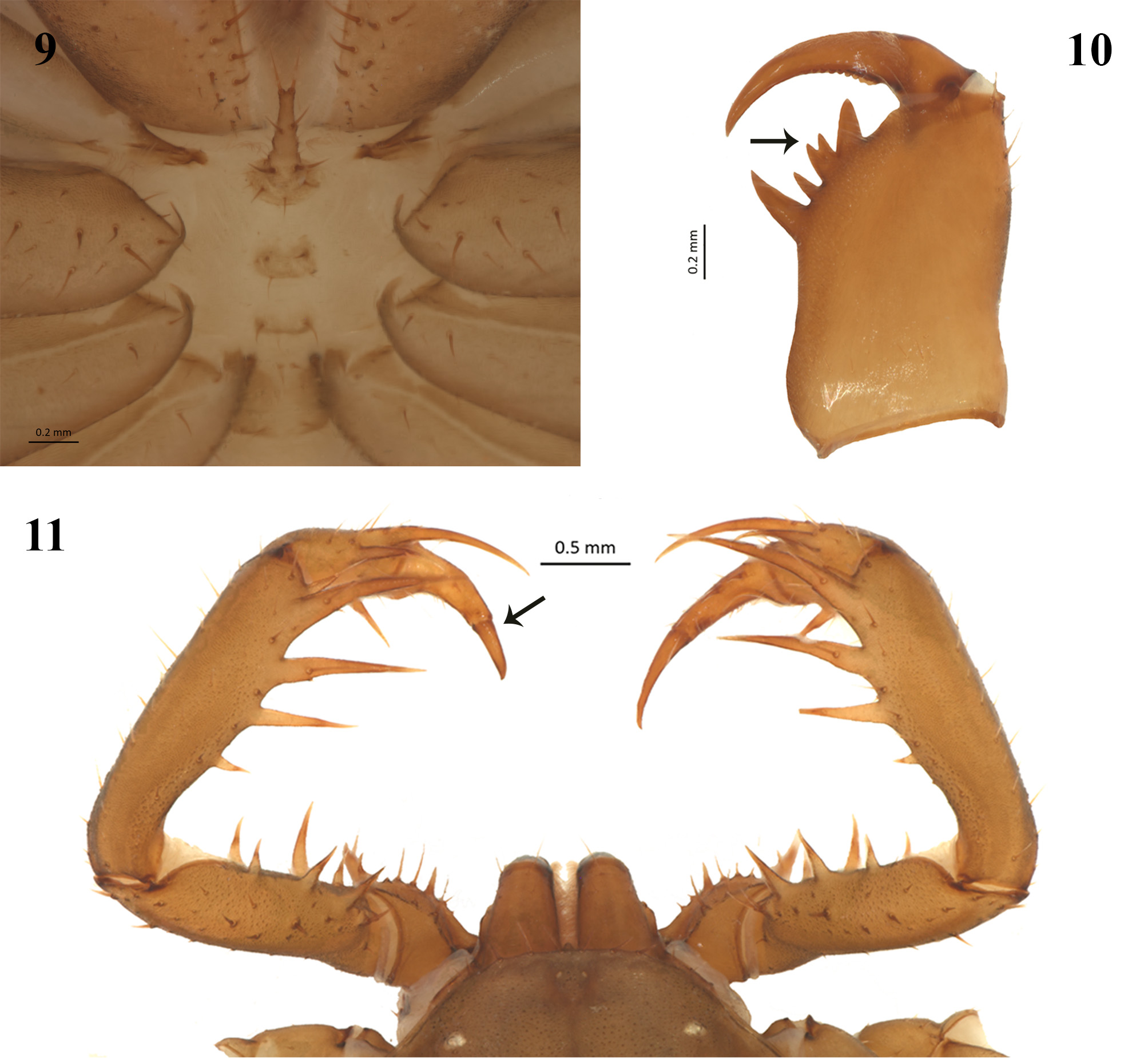