Type-material: Photosyntypes, line drawing and oocysts recovered from L. verreauxi  in 2.5% K 2 Cr 2 O 7 solution ( Williams et al. 2010) are deposited at the Museu de Zoologia at the Universidade Federal Rural do Rio de Janeiro, Brazil, under accession number MZURPTZ2019016. Photomicrographs are also deposited and available (http://r1.ufrrj.br/labicoc/colecao.html) in the Parasitology Collection of the Laboratório de Biologia de Coccídios, at UFRRJ, under repository number P-99/2019. Photographs of the type-host specimen (symbiotype) are deposited in the same collection  .

Representative DNA sequence: One representative COI sequence was deposited in the GenBank database under the accession number MN 326301View Materials.

ZooBank registration: To comply with the regulations set out in article 8.5 of the amended 2012 version of the International Code of Zoological Nomenclature ( ICZN, 2012), details of the new species have been submitted to ZooBank. The Life Science Identifier ( LSID) for E. ferreirai  is urn:lsid:zoobank.org:act:04C29620-AF5E-4C8DBF5D-5B9D31572122 .

Sporulation: Exogenous. All oocysts were passed in the feces unsporulated and were fully sporulated by day 7 in K 2 Cr 2 O 7 solution at room temperature (20–25°C).

Etymology: The specific name is derived from the family name of a Brazilian ornithologist Dr Ildemar Ferreira, given in his honor for his contribution to the study of ecology and parasitology of birds.

Remarks: Eimeria ferreirai  is different from other coccidian species of Columbidae  on in a few aspects ( Table 1). In fact, there are few characteristic features, often barely detailed, that differentiate some Eimeria  spp. from Columbiformes ( Ortuzar-Ferreira et al. 2020)  , such as Eimeria labbeana (Labbe, 1896) Pinto, 1928  , Eimeria columbarum Nieschulz, 1935  , Eimeria columbae Mitra and Das Gupta, 1937  , Eimeria curvata Adriano, Thyssen and Cordeiro, 2000  , Eimeria janovyi Bandyopadhyay, Bhakta and Shukla, 2006  , Eimeria columbapalumbi Jamriška and Modrý, 2012  and Eimeria  sp. of Yang et al. (2016), which are very similar morphologically and morphometrically, and have ecological compatibility. The presence of micropyle and micropyle cap differentiates E. ferreirai  from all other Eimeria  spp.; however, failure to observe this characteristic feature approximates Eimeria  sp. of Yang et al. (2016) of E. ferreirai  . In this sense, sequencing of the COI gene was performed to complement the identification of E. ferreirai  and differentiate it from Eimeria  sp. of Yang et al. (2016), which was also molecularly identified by the COI gene.

Phylogenetic analysis: DNA amplification of the oocysts of E. ferreirai  recovered from a L. verreauxi  from Itatiaia National Park showed a clear band of ~250 bp. Phylogenetic analysis included 20 sequences for Eimeriidae  species available on GenBank ( Fig. 3View FIGURE 3). Toxoplasma gondii (Nicolle and Manceaux, 1908)  was used as the outgroup. Eimeria ferreirai  had the maximum similarity of only 94.9% with Eimeria purpureicephali Yang, Brice and Ryan (2016)  ( KU140598View Materials), which is a coccidian parasite of red-capped parrots Purpureicephalus spurius (Kuhl, 1820) (Yang et al. 2016)  . Thus, E. ferreirai  sat isolated in the cladogram, between clades with Eimeria  spp. from Psittaciformes  and Galliformes, in addition to an Eimeria  sp. from house mice Mus musculus Linnaeus, 1758  ( MH777502View Materials), which must be a pseudoparasite ( Trefancová et al. 2019). Similarity to other Eimeria  spp. from Columbiformes  was low, of 93.5% with Eimeria  sp. of Yang et al. (2016) ( KT305929View Materials), of 90.9% with Eimeria columbinae  OrtúzarFerreira and Berto, 2019 ( MN082528View Materials) (Ortúzar-Ferreira et al. 2019) and 93.5% with an Eimeria  sp. from pigeons ( MF496271View Materials) which is deposited in GenBank, but yet unpublished. 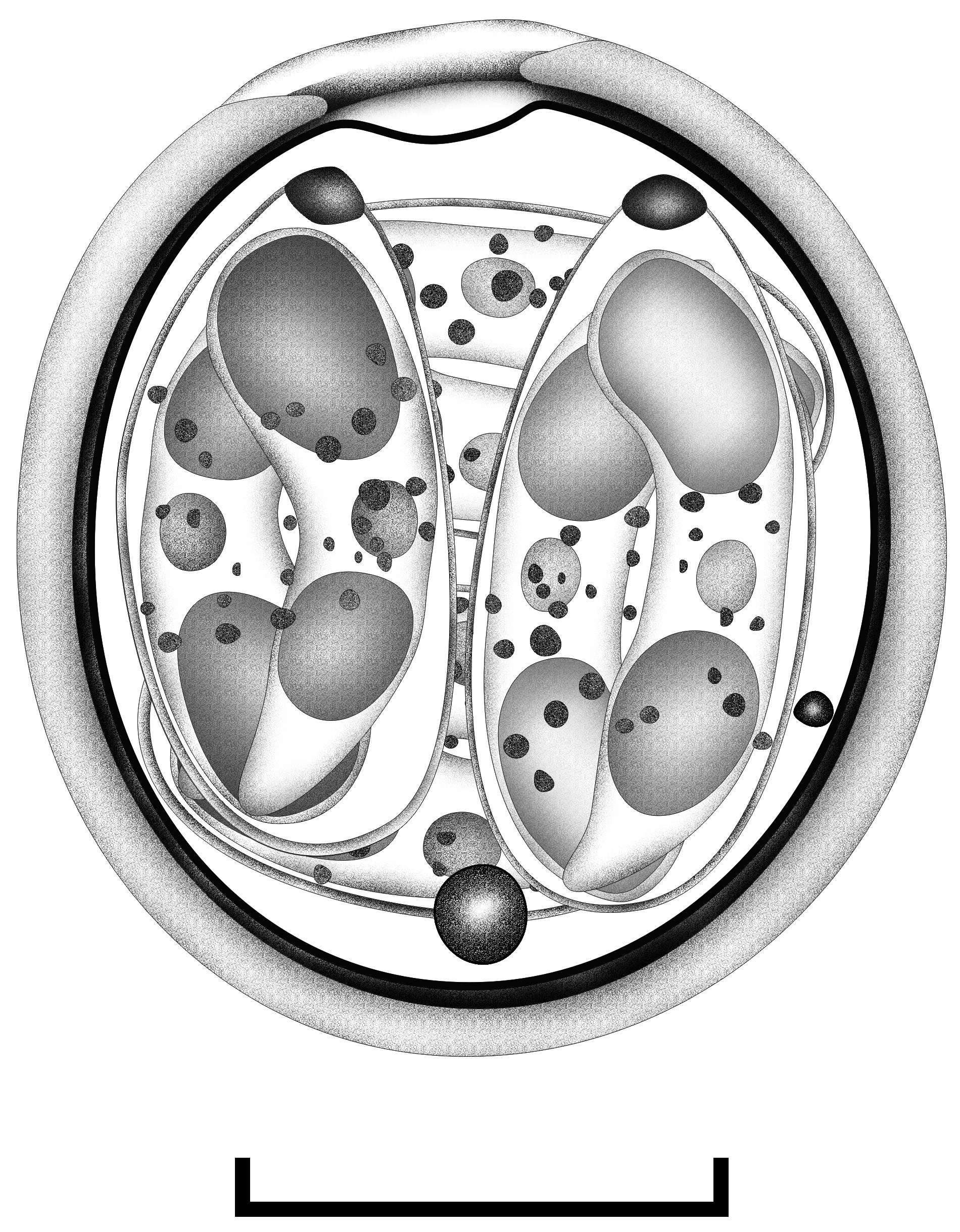 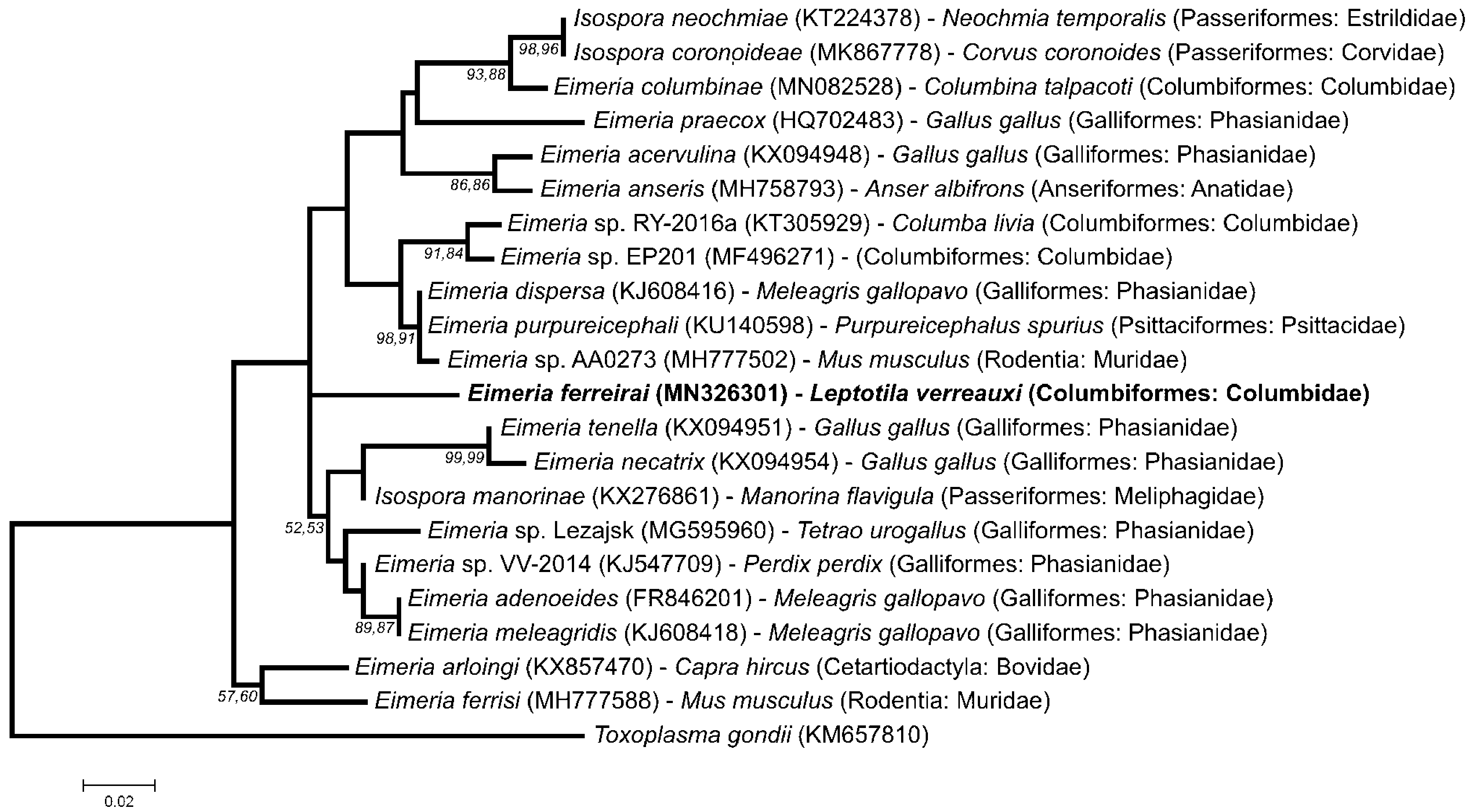