Etymology. The specific name refers to the collection locality.

Diagnosis. Astrocyclus  with aboral surface of disc depressed centrally, radial shields converging at center. Radial shields partly covered with more or less continuous transverse thin white lines made up of closely packed granules (6–8/mm), which loop over the shields and partly extend into the inter-shield and interradial areas.

Description of the holotype. External morphology. The disc five-lobed, 27 mm in disc diameter, with arms at least 115 mm long ( Fig. 17A –BView FIGURE 17). The disc markedly depressed centrally ( Fig. 18AView FIGURE 18); narrow, raised, radial shields converging there ( Fig. 18A –BView FIGURE 18). The entire aboral surface, including the area between each of the radial shields, covered with evenly spaced low granules ( Fig. 18A –BView FIGURE 18). The radial shields partly covered with more or less continuous transverse white lines made up of microscopic, closely packed granules (6–8/mm), which loop over the radial shields, with some partly extending into the inter-shield and inter-radial areas of the disc. The arm segments are conspicuously ringed laterally and aborally by narrow bands of microscopic granules, mostly in two rows, which stand out from the surface ( Fig. 19B –DView FIGURE 19). There are two, then three, small arm spines with hyaline tips per segment ( Fig. 18D –FView FIGURE 18). The distalmost arm segments have girdle bands, with strongly curved hyaline hooklets ( Fig. 19DView FIGURE 19). The oral surface of the arms and disc are covered with evenly spaced granules, and there is one madreporite in each of the five interradial disc areas, jaws entirely covered by spiniform teeth and oral papillae ( Fig. 18CView FIGURE 18).

Variation. In the smallest specimen ( USNM 1422067, dd. 10 mm), the entire area between the shields is covered with transverse lines. This feature differs from that in the Brazilian samples described and illustrated by Gondim et al (2014), where between each radial shield there are 6–7 discrete groups of granules running in line with the shields ( Fig. 17DView FIGURE 17). In the two larger specimens ( USNM 1411388, dd. 27 mm; USNM 142 2067, dd. 24 mm), a few of these lines of granules extend between the shields.

Remarks. As all four examined specimens from the Indian Ocean have similar disc and radial shield coverings which differ markedly from the western Atlantic specimens, we consider that they represent a separate taxon, which we here establish as a new species. The arms bifurcate at least 15 times, the first branch within the diameter of the disc, and the second at the distal end of the radial shields ( Fig. 17A –BView FIGURE 17).

Astrocyclus caecilia  has been recorded from the Caribbean Sea, Gulf of Mexico (type locality), and from northeastern Brazil by Gondim et al. (2014), who have illustrated the species extensively. The vast geographical separation of the type species and the Somalian form, plus the obvious morphological difference in the covering of the radial shields and their interradial aboral areas, indicate that a new species, Astrocyclus somaliensis  sp. nov. should be erected for this Somalian form. 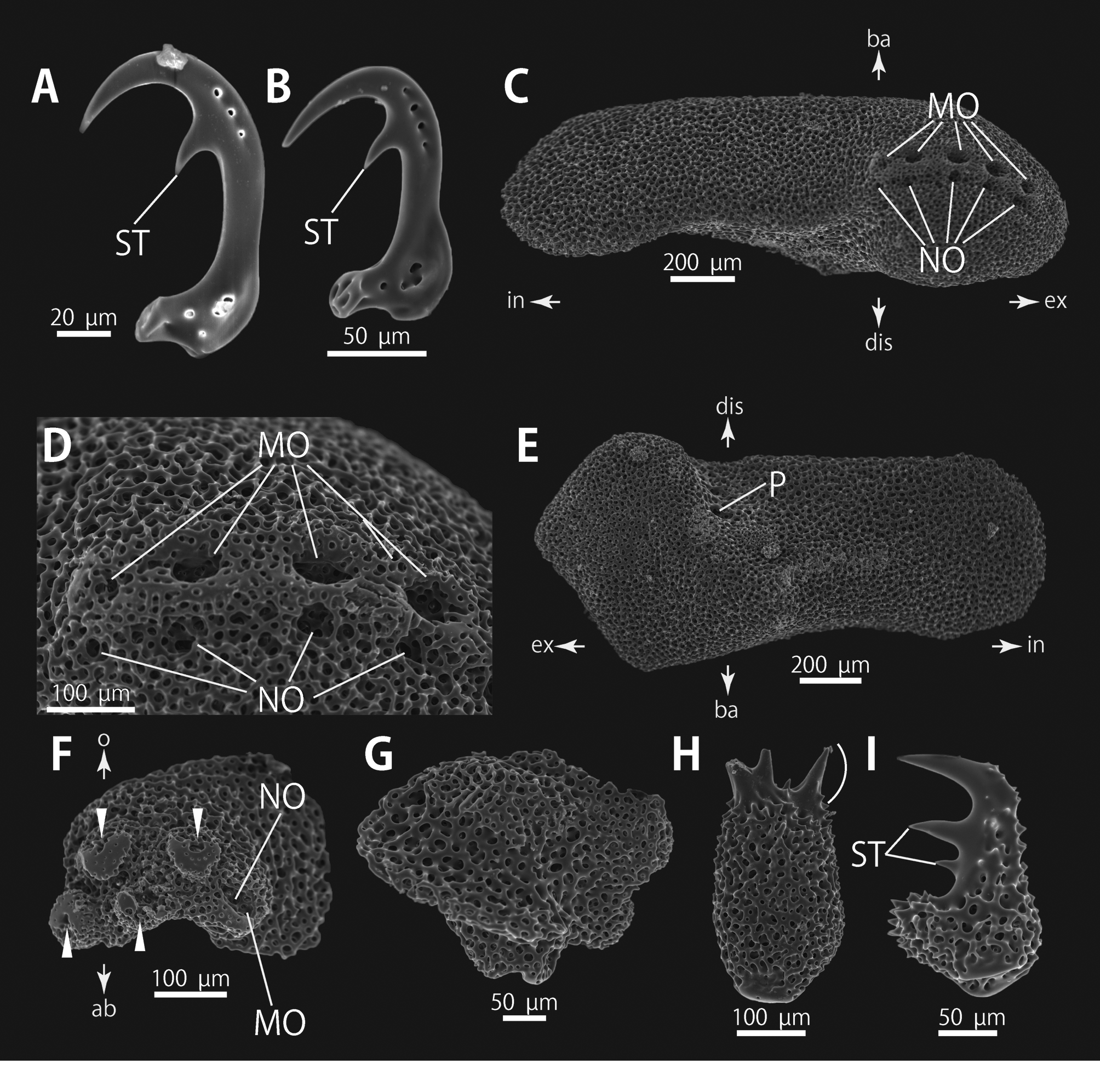 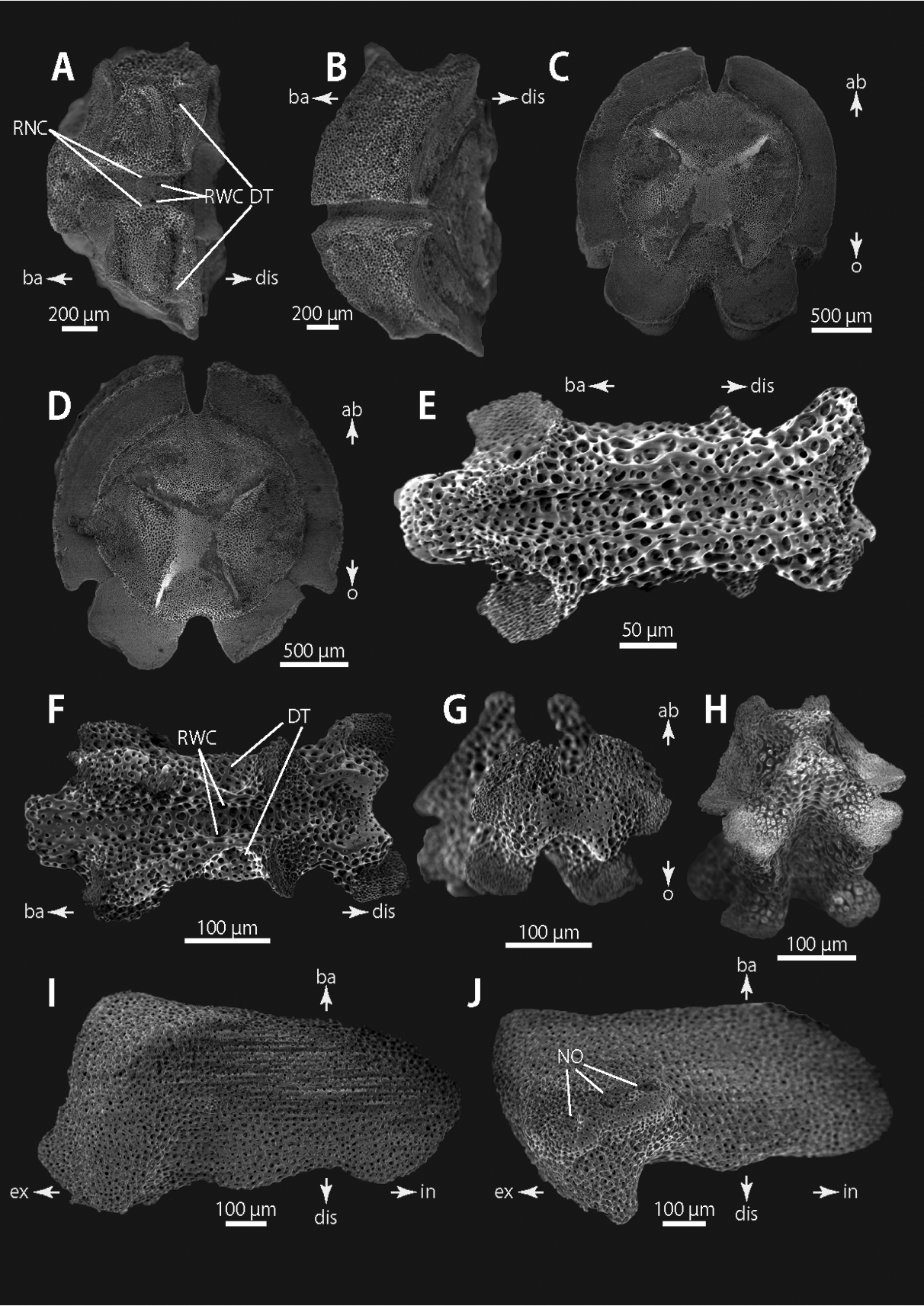