Habitat. Lowland deciduous and evergreen forests from sea level to 914 m but most commonly below 100 m. In Mexico, the Lesser Sac-winged Bat also occurs in secondary forests, croplands, and grasslands.

Breeding. At least in parts of the distribution, Lesser Sac-winged Bats are polyestrous. In Costa Rica, first birth peak of the year occurs in May near onset of rainy season, and a second birth peak occurs in October-November. In Trinidad, there is one birth peak per year in May. Females carry their young for 10-15 days, after which young can fly, but they continue to nurse until c.2-5 months of age. Females can reproduce at 12-18 months of age.

Activity patterns. Lesser Sac-winged Bats are crepuscular. Roost sites are often found on exposed trunks of a large variety of tree species in riparian habitats. Other roosts include undersides of large-leafed plants (e.g. banana and coconut) and in abandoned buildings. Groups of Lesser Sac-winged Bats emerge in late afternoon daylight and forage together in forest canopies until after complete darkness when a group might ascend to forage in forest canopies. Individuals fly repeated back and forth loops within defined feeding areas. During the day, individuals remain alert in roosts and maintain high resting metabolic rates. Echolocation prey search calls have frequencies of C.45—95 kHz, with maximum energy of c.55—60 kHz.

Movements, Home range and Social organization. Roosting groups of Lesser Sacwinged Bats have 1—9 individuals, usually representing a pair of adults and their offspring. Social groups are somewhat fluid, with individuals entering and leaving a given group. Densities range from 2-5 ind/ha in Costa Rica to 17-6 ind/ha in Trinidad; biomass estimates are 14—97 g/ha in these two countries. Males defend individual females during breeding when they occur as monogamous pairs. A variety of audible chirps are used for communication at roosts.

Status and Conservation. Classified as Least Concern on The IUCNRed List. The Lesser Sac-winged Bat has a large distribution and presumably large and stable overall population, and it occupies a wide range of habitats. It occurs in many protected areas. In Mexico, it receives special protection. Forest loss from conversion to pasture and agriculture is the primary threat, particularly in the Brazil. 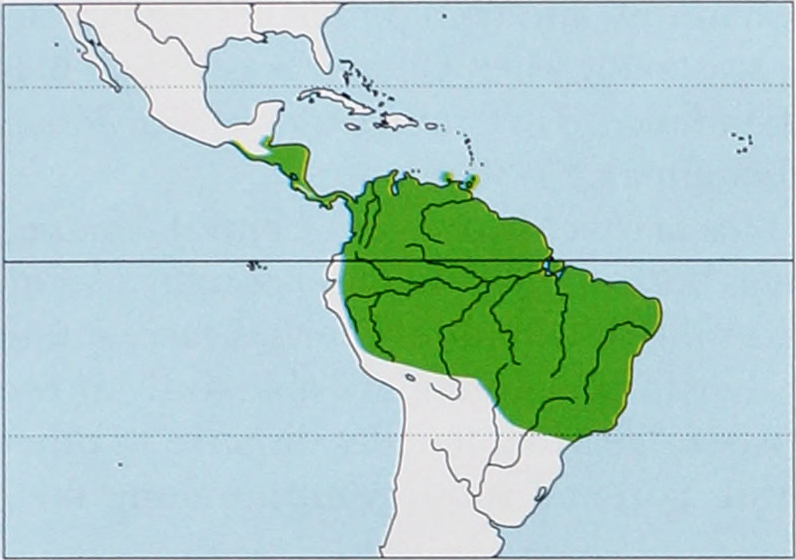