Some authors regarded boliviensis as a valid subspecies or simple synonym of D. dactylinus , but recent morphological and molecular studies strongly support D. boliviensis as a distinct species. Monotypic.

Descriptive notes. Head-body 270-290 mm, tail 410 mm; weight up to 600 g. The Bolivian Bamboo Rat is large, olivaceous, arboreal, and characterized by distinct dark mid-dorsal stripe of tricolor hairs (black-brown-black) between head and rump. Its fur is soft, grizzled grayish olivaceus, streaked with black on dorsum but paler on side, with sparse whitish fur on belly. Head is grizzled gray with white striped hairs; olivaceous black stripe hair patch (black might be absent) surrounded by pale-tipped hairs occurs between eyes, nose, ears, and nape; mystacial black vibrissae are short and do not extend beyond one-half the length of superciliary vibrissae, as they do on the Amazon Bamboo Rat ( D. dactylinus ). Apart from the initial 65 mm or so of well-furred tail base, long bicolored tail is naked, covered with small scales (with 6 annuli/cm), and overall c.150% of head-body length. Scale hairs are dark brown or black at base oftail but become colorless toward tip of tail; scales are less pentagonal than those of the Amazon Bamboo Rat. Forefeet of the Bolivian Bamboo Rat have four digits, with digit two and three distinctly longer than lateral ones; each digit has a nail rather than a claw. Hindfeet have five digits, with reduced hallux. Skull of the Bolivian Bamboo Rat is large and has broad and short rostrum, proportionally broadened supraorbital ledges with well-developed subtriangular post-orbital processes, and medium-sized bullae. Jugal is primary component of post-orbital processes of zygomatic arch. Paraoccipital processes are oriented anteriorly and curved to follow contour of each bulla. No nerve canal is present on floor of infraorbital canal. Palate forms a shelf that extends well behind the M’. Upper molar tooth rows diverge antero-posteriorly so that dP*s are nearly in contact. Chromosomal complement is 2n = 118 and FN = 168.

Habitat. Amazonian lowlands, primarily within riparian communities with large cane thickets and bamboo patches (e.g. Guadua spp. , Poaceae ) at known elevations of 200-1000 m. In Peru, some specimens were collected in a thicket of Bambusa ( Poaceae ) bamboo and small trees. The Bolivian Bamboo Rat occurred at higher elevations than the Amazon Bamboo Rat, but the possibility that they overlap in headwater habitats needs further study.

Food and Feeding. Stomach contents of Bolivian Bamboo Rats from La Reserva, Bolivia, indicate an exclusively bamboo diet, with remains of sprouts and epidermis present. Field observations of foraging behavior indicate that the Bolivian Bamboo Rat removes the sheet of a bamboo shoot to access inner parts, putting aside piles of unconsumed material. Other observations include some traces of bamboo leaf consumption and gnawed holes on bamboo stems near internodes.

Activity patterns. The Bolivian Bamboo Rat is nocturnal, with activity usually starting at dusk and terminating an hour or so before dawn. During the day, individuals use rest sites in dense vegetation on perimeter of their home range. In Bolivia, three rest sites were recorded for one individual: one in a Attalea ( Arecaceae ) palm in riparian forest near the water edge and two at 10-25 m high in dense vines surrounding tree trunks.

Movements, Home range and Social organization. The Bolivian Bamboo Ratis a slow, precise, and cautious climber, and it is difficult to locate in dense vegetation. Field observations are scarce, but one individual from Cocha Cashu, Madre de Dios (Peru), was radio-tracked for six nights. It was recorded 157 times in a home range of 0-23 ha within a 0-43ha bamboo forest patch. It moved a mean of 61-9 m/night (range 45-68 m), and mean total path length based on two points per hour was estimated at 227 m (range 169-284 m). Movements of this individual were slow (mean displacement of 18-9 m/h). Vocalizations of Bolivian Bamboo Rat are loud and high-pitched and often mistaken for an anuran. Calling Bolivian Bamboo Rats were seen sitting cross-wise over their haunches on tree branches, vines, or branch forks, with their front feet either grasping a branch or tucked close to their chest. Dorsal hairs at base of tail were slightly erected, and tail hung free below body. At each call pulse, mouth was open, and head was positioned forward. In headwaters of Rio Jurua (Brazil), individuals produced series of 15-25 short staccato pulses/ call, with a maximum of 45. In La Reserva (Bolivia), calls from males and females were recorded between 19:00 h and 04:00 h, most frequently between 22:00 h and 02:45 h. Two types of sounds were recorded: long distance high amplitude calls (“L.” calls) and gruntlike pulses of narrower frequency range and lower amplitude that carried over short hearing distances (“A” calls). Short distance “A” calls were produced singly or in a long series lasting 20 minutes or more. In Cocha Cashu, individuals were located only in bamboo stands. Along the Rio Tambopata, Madre de Dios (Peru), Bolivian Bamboo Rats called from within large bamboo patch several kilometers from the main river course. The radiotagged male at Cocha Cashu produced “L” calls twice over four nights of observation between 19:47 h and 22:18 h and again between 00:45 h and 02:00 h. No other individuals made “L” calls from within this male’s home range. Other nights, this same individual produced ten “A” calls, soliciting similar calls by another individual from within its home range about one-half the time. A female replied on two occasions and two other individuals on separate occasions from spots less than 20-50 m from the radio-tagged male. At Cocha Cashu, calls lacked the initial burst and had a mean of 29 pulses. Initial pulses were about three times as long as those of Amazon Bamboo Rats in Ecuador and had no harmonics below 500 Hz. Calls of Bolivian Bamboo Rats at Tombopata were similar to those from Cocha Cashu but had a higher mean of 44 pulses. Individuals also presumably communicate with chemical signals; at Cocha Cashu, two individuals were observed rubbing their sternal glands on a branch just prior to vocalizing.

Status and Conservation. Classified as Least Concern on The IUCN Red List. This classification is based primarily on the general diversity of riparian forest habitats occupied by Bolivian Bamboo Rats. Despite its loud vocalizations, it is rarely seen and is very difficult to trap alive. Most museum specimens were collected using shotguns in lowland primary and secondary rainforests. More ecological and conservation-directed surveys are needed for this secretive species. 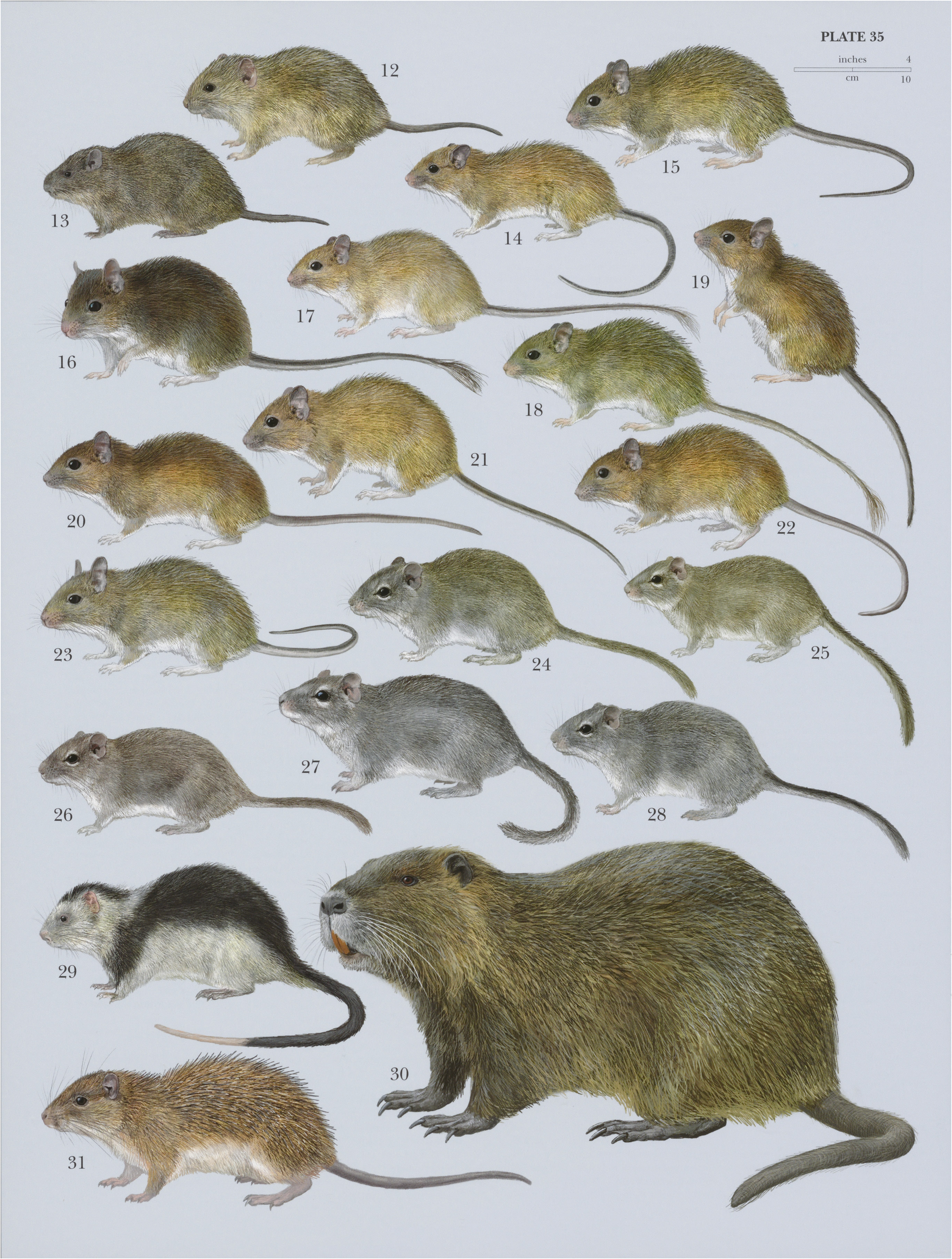 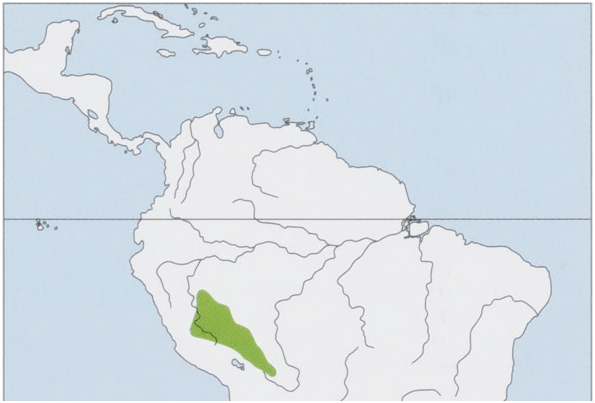