Diagnosis. Agrotis colossa  sp. n. differs from the majority of its Asiatic congeners by the relatively large size (wingspan 38–46 mm, forewing length 19–22 mm, however a local population restricted to the high mountains of western Sichuan only 33–41 mm, length of forewing 15–19 mm), characteristic forewing pattern and the broadly bipectinate antennae of the males. In Asia, the only really resembling taxa among the additional member of the genus Agrotis  is the Agrotis nagyapo Hreblay & Ronkay, 1998  ( Fig. 12View FIGURES 9 – 16), those of the size (38–48 mm wingspan and 19–23 mm forewing length) is generally matching with the A. colossa  . Agrotis colossa  ( Figs 1–11View FIGURES 1 – 8View FIGURES 9 – 16) is distinguishable from it by the generally lighter, sometimes whitish thoracic pubescence of both tegulae, the more conspicuously defined stigmata, particularly the larger claviform spot, the more outward projecting postmedial line in the medium section and the more uniform and darker hindwing, with more prominent cellular spot, whereas the latter one is missing or obsolescent in the A. nagyapo  . Although the original types of the A. colossa  are old and the colouration might be changed somewhat during the past decades, it is well visible, that the new species have rather variable slate grey suffused ground colour in the forewing (there are few darker, greyish or brown coloured specimens among the fresh ones), whereas this is brownish –greyish and pale ochre suffused in the A. nagyapo  ( Fig. 12View FIGURES 9 – 16). The stigmata are incompletely black outlined in A. colossa  , orbicular spot somewhat elongated without or only with slight dark infiltration and always without ochre suffusion; while completely black outlined and pale ochre suffused in A. nagyapo  . The separation needs careful study by the comparison of the male genitalia, since slight differences are recognizable as it is usual in the genera Agrotis  , however distinction is much easier in case of the females. Agrotis colossa  ( Figs 17–21View FIGURES 17 – 20View FIGURES 21 – 24) have somewhat stronger valva and higher juxta with slighter medial incision and finer carinal plate with slighter, longer, finely dentate basal bar in the vesica and longer vesica tube. The female genitalia of the “ allotype ” not respectable, since the abdomen has been glued and no Agrotis  genitalia was found inside after dissection (very likely of Xestia Hübner  or Sineugraphe Boursin  sp., Fig. 29View FIGURES 25 – 29) The genitalia of a female specimen ( Fig. 25View FIGURES 25 – 29), collected not very far from the “ allotype ” shows remarkable differences from that of the A.

It is worth to mention, that A. colossa  considerably different externally from the Nepalian (Langtang) Agrotis maculaclarus Plante, 1979  , of which have also bipectinated antennae in the males and filiform in the females.

Nevertheless, separation is easy, since A. colossa  strikingly differs from the A. maculaclarus  externally by its more elongated forewing apex, unicolorous, evenly slate greyish or light greyish brown coloured forewings, very conspicuous, distinctive forewing pattern, sharply defined, mostly encircled stigmata; while the ground colour of the forewings dark granulose grey in the A. maculaclarus  , the marginal area and the stigmata conspicuously lighter, somewhat whitish suffused, stigmata less defined, the antemedial line less wavy and out warding in the lower section and the cellular spot in the hindwing is not present or obsolescent. In the male genitalia, the shape and the width of the valva very different, as in the A. colossa  sp. n. these are much thinner, longer, elongated, particularly in the terminal section; the single female A. maculaclarus  genitalia has never been dissected.

Description. Wingspan 38–46 mm, forewing length 19–22 mm, however a local population from Sichuan only 33–41 mm, length of forewing 15–19 mm); the known females, particularly the “ allotype ” are distinctly smaller. Antennae of the males are light brown, broadly bipectinated, however somewhat more lighter, filiform in the females; the palpi brown, last section and the frons light brown, vertex and vesture of the thorax whitish – greyish brown, however lighter in both sides, whereas pale or whitish on the underside; the collar darker with a medial black line. The ground colour of the forewings unicolorous variable light slate grey or grey somewhat with greyish brown suffusion, however there are a few darker, greyish brown coloured specimens among the fresh ones. The ground plan of the forewing pattern basically resembles those of the close relative species; however, the wing shape and the intense of the pattern variable. The most remarkable external features of the new species are the forewing with pointed apex, the well discernible, more or less evenly black outlined orbicular, reniform and claviform stigmata with the black defined, double, somewhat wavy antemedial line with a projection in the lower section inward the medial area and the simple, crenulated postmedial transverse line. The hind wings lighter, evenly whitish –brown suffused in which entirely lack the medial line, whereas the cellular spot present, tiny, but well discernible. Under side of the wings lighter greyish, the hindwings whitish, with diffuse brown shade of the reniform stigma and the postmedial transverse line in the forewing and with obsolescent brown shade of the medial line and cellular spot in the hindwing. The individual variability in size, intensity of ground colour and wing pattern can be on wide scale.

Biology and distribution. Series of males and females were collected at light on 21.–25.v. 2012 in northwest China's Yunnan province in a remote area, located near Lijiang and Yak La pass of the Baima Xue mountain range, later 03.–13.v. 2016 in remote parts of west China Sichuan province near the Daocheng, Litang, and Batang of the Shaluli Shan mountain range. The new species was collected at altitudes ranging from 3100 to 4100 meters in mountain mixed forests dominated by various conifer trees, bushes and rhododendron.

Etymology. Authors decided to keep the original name by Charles Boursin, keeping respect his original decision and in honour his outstanding job on the Palaearctic Noctuidae  ; furthermore the name is very fits with this species. 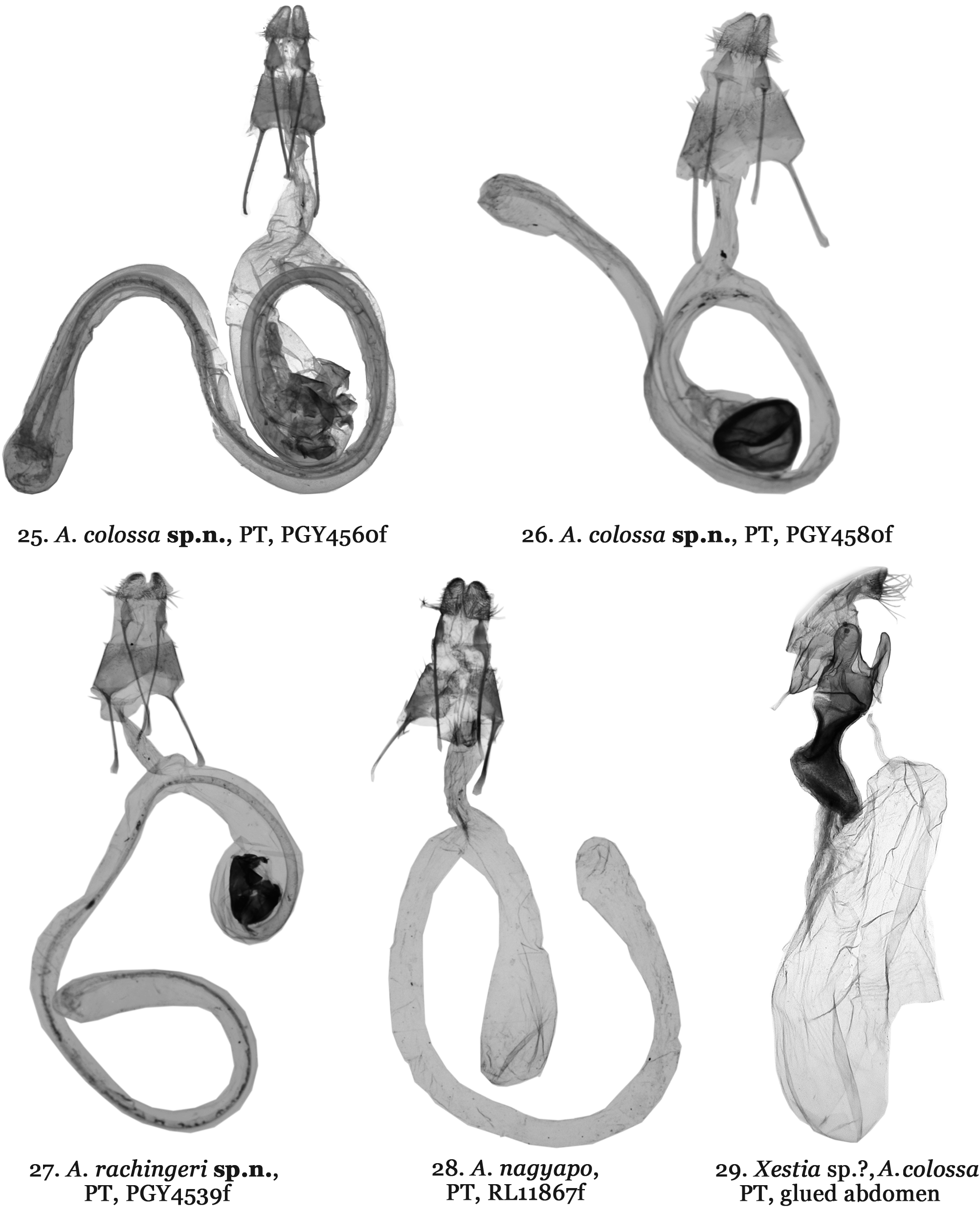