Fairly large pale species. Rounded and domed head with sharp distinction between head and narwhallike rostrum. Tubercles and setae on metazonites abundant and irregular, setae quite long, giving a rather ragged appearance. Prozonites without tubercles. Channel between pro- and metazonite with horseshoeshaped tubercles. Limbus crenulated like posterior margin of pleurites. Accessory claws robust, roughly half the length of claw and situated on the dorso-anterior side of claw. Anterior gonopods resembling walking legs with a simple distal claw.

Noun in apposition referring to the Old Norse name for the narwhal ( Monodon monoceros Linnaeus, 1758 ). The head of our species strongly resembles the head of the narwhal.

All from the same locality with dates between Apr. 1982 and Apr. 1983. Specimens split between INPA, NHMUK, NHMD and ZMUM.

HEAD ( Fig. 4 View Fig C–D). Densely pilose all over and covered in regular, sub-circular tubercles, including the antennae. Width (between antennal sockets) 0.3–0.6 mm. Head very sharply defined from rostrum in dorsal view, slightly rounded anteriorly. In lateral view head so domed that an abrupt ‘step’ is formed between head and rostrum. Length of rostrum to antennal base: 0.5–0.8 mm. Rostrum slightly downcurved, with several long setae at base, almost reaching tip of rostrum and smaller lateral ones on both sides of the whole length.

COLLUM. Covered with tubercles and setae; anterior margin appearing sharply V-shaped in some specimens but in reality a thinner region anteriorly with a shallow posterior curve (also seen under SEM). Tergite 2 much less than half the length of collum.

MIDBODY SEGMENTS. When the number of tergites are plotted relative to body length this species forms an intermediate group on the graphs ( Fig. 1 View Fig ). No obvious paranota-type structure, although there may be slight bumps where the repugnatorial glands exit, appearing more pronounced by a ring of ‘palisadelike’ setae. In dorsal view it appears as if there are small paranota but these consist of the metazonital ridges. Clear differences in height of pro- and metazonite so that the metazonite stands proud, and the whole appearance when viewing the animal from the side is of a castellated dorsal margin ( Fig. 5A View Fig ). Relative width of pro- and metazonite: 0.78–0.88. Prozonites with cytoscutes but without any tubercles and lacking setae. Metazonites with numerous tubercles and setae. Under SEM tubercles very uneven in shape. Setae rather long and uneven, giving the animal a slightly ragged look. Setae apparently of similar length regardless of the size of the individual so appearing longer in smaller specimens. ‘Channel’ between pro- and metazonite with tubercles appearing horseshoe-shaped; possibly due to the partial collapse of more blister-like structures ( Fig. 5B View Fig ). Setae 0.04–0.1 × body width. Limbus crenulated. Pleurites setose and with curved posterior margin, ventral margin bilobed, hind margin crenulated. Ozopores present from tergite 5 to the ultimate tergite, on tergal ridges, in anterior ¼ located more or less centrally on ridge, in posterior ¾ on posterior margin of ridge. Some appearing on very slight protuberance probably largely due to the slight change in angle of the tergite at this point.

LEGS. Length 0.57 × body width. Length:width ratio of podomeres (prefemur to claw): 1.54, 1.69, 1.1, 1.47, 3.31, 4.25. Tarsus very long and narrow. Claw rather angular in shape and with slightly thickened region at base on anterior side. Accessory claw slightly shorter than claw but substantial in size and thickness, arising from anterior-dorsal side of the claw ( Fig. 5C View Fig ). Accessory claw can be seen under light microscope and makes it appear as if there is a double claw at the end of the tarsus when seen in dorsal view, less obvious in anterior view because the accessory claw does not project beyond the claw. In females these ‘double claws’ only seem to be obvious at the anterior end of the body, in males they are apparent almost the whole length. Coxal pores present and large at least on some specimens.

ANTERIOR GONOPODS ( Figs 4B View Fig , 5 View Fig D–E). With five segments (including coxa). Distally a simple claw, the whole structure very reminiscent of a normal walking leg but rather stouter and with especially stout

and bent tibia. Abundant setae on terminal two podomeres, including a tuft of short setae just below the base of the last segment, on the posterior side and more setae on the top of the ‘knee’. Several prominent setae on anterior margin of basal three segments.

POSTERIOR GONOPODS ( Figs 4B View Fig , 5 View Fig D–E). Number of segments may be 5–7 (including coxa) but distinction between segments unclear. Distal part a simple hyaline tip with slight notch and two small ‘nicks’ towards the tip at least on some specimens.

All specimens of C. nahvalr sp. nov. were obtained from Kempson extractors suggesting that this species is soil dwelling. 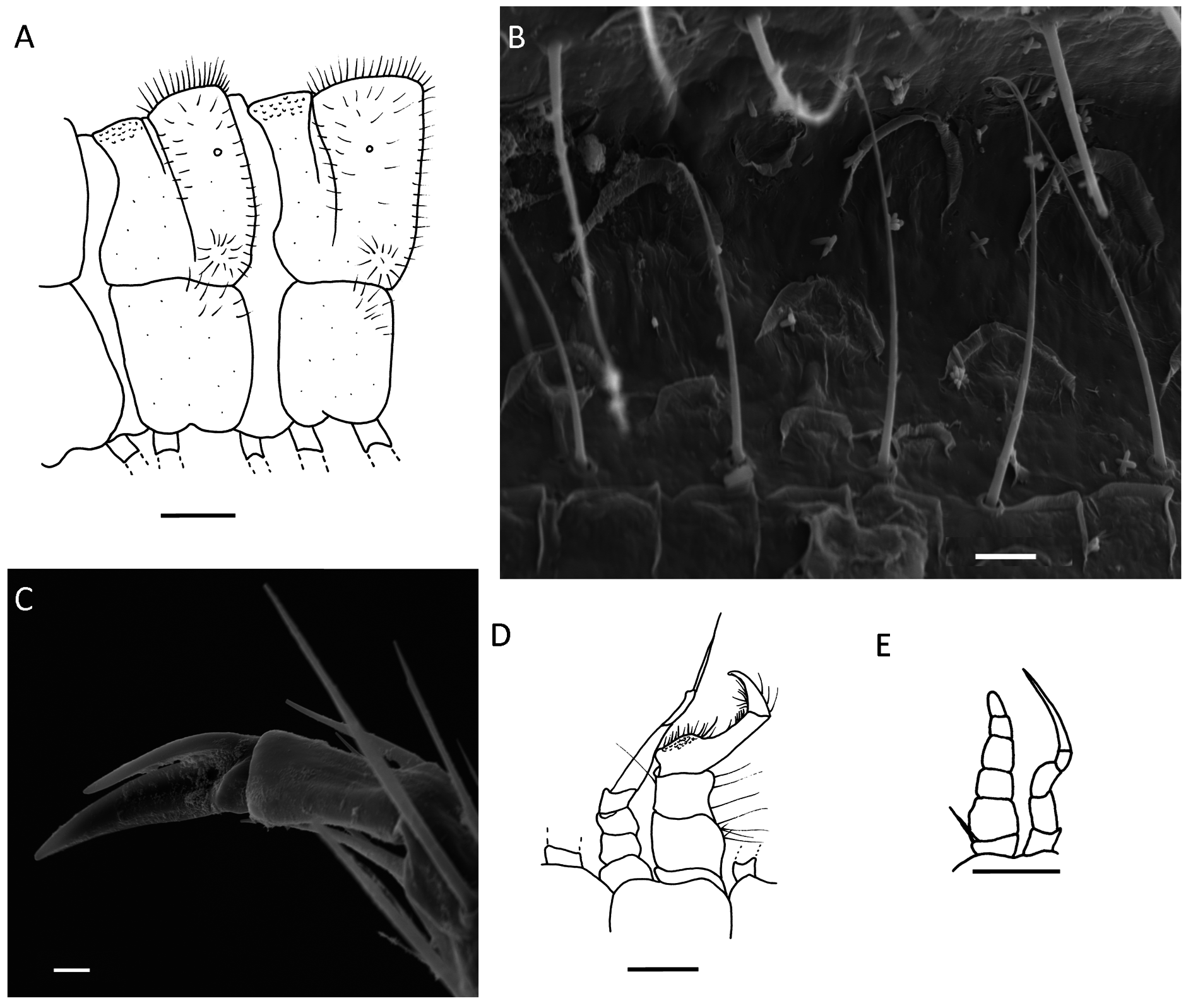 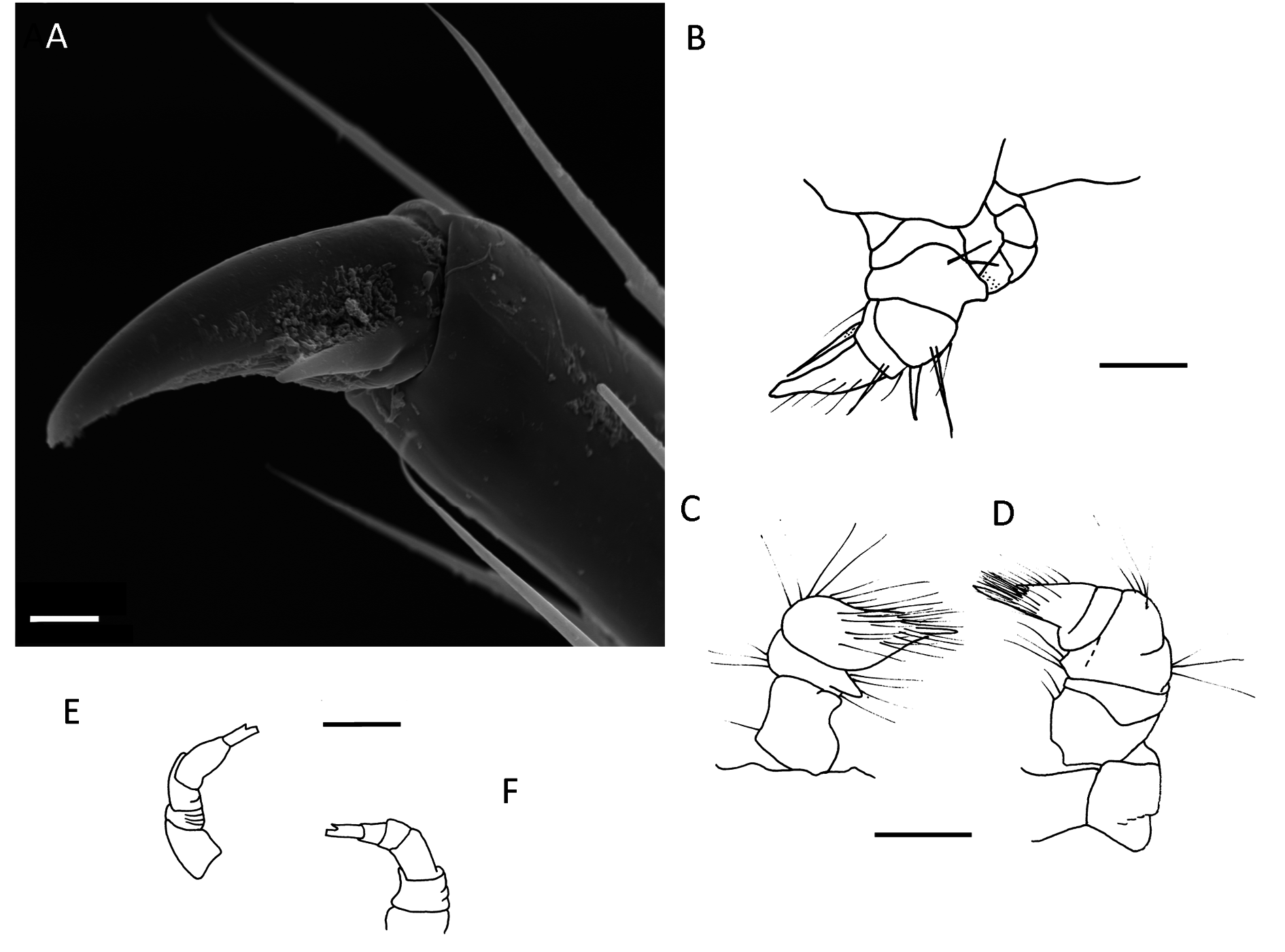