Small thin species with a clear demarcation between head and rostrum both in lateral and dorsal views. Very rugose with more or less regular and sub-circular tubercles all over the head, metazonites and the channel between the pro- and metazonite, some of these being ‘anchor’-shaped from the side. Limbus with crenulations. Posterior edge to pleurites with saw-shaped teeth, only visible from certain orientations and perhaps due to the tubercles. Accessory claw robust and visible under light microscope. Anterior gonopods with ribbon-like setae on distal segment, posterior gonopods with a simple hyaline tip.

COLOUR. An even pale yellow all over, some individuals brownish.

ANTENNAE. Longer than the body width (1.12:1), appear long in comparison to rostrum, surpassing it by at least one antennal segment and usually substantially more, and over 120% of rostrum length in analysed specimens. Length:width ratio of antennomeres: 0.8, 0.97, 1, 1.03, 0.95, 1.87, 0.5, sensory cones not measured. Sensory pits on antennomeres 5 and 6 clearly present.

COLLUM. Anterior margin appearing strongly V-shaped in light microscope but much more gradually curved under SEM, the difference may be due to the relative invisibility of an area without tubercles under light microscope. Tergite 2 length much shorter than collum.

MIDBODY SEGMENTS. When plotted this species forms a group with a small body size and a low number of tergites ( Fig. 1 View Fig ). Paranota absent. A clear and definite ‘dip’ between pro- and metazonite present. Relative length of pro- and metazonite 0.87–0.92. Surface structure of pro- and metazonites generally very tuberculate. Tubercles appearing more or less regular on the metazonites and in at least one specimen some of the tubercles are like collapsed blisters as seen in C. nahvalr sp. nov. On the anterior margin are tubercles appearing ‘anchor-like’ which may be partly related to the lateral view ( Fig. 6B View Fig ). Metazonites with lots of setae. Prozonites with rugose appearance due to cytoscutes but with a smoother region mid-dorsally. ‘Channel’ region between pro- and metazonite with subcircular, clearly pronounced tubercles. Setae short, 0.03–0.07 × body width. Limbus with clear and regular row of semi-circular bumps (under SEM, Fig. 6C View Fig ). Pleurites ventrally with notch at least in anterior part of body ( Fig. 6H View Fig ); posterior margin saw-like under SEM, only seen from certain angles, maybe due to the tubercles in cross section ( Fig. 6D View Fig ). Ozopores present from tergite 5 to the last tergite, on slight protuberance as seen under SEM, this perhaps seems more obvious due to the ‘palisade’ of setae round the rim.

LEGS. Length 0.62 ×height. Length:width ratio of podomeres (prefemur to claw): 1.37, 1.5, 0.87, 1.21, 1.21, 3. Tarsus slightly longer than wide. Claw normal. Accessory claw on anterio-ventral side of claw, short and reaching to less than half the length of the claw (22% of claw length on slides) but very robust and visible under light microscope ( Fig. 6E View Fig ). Coxal pores present.

ANTERIOR GONOPODS. With five segments (including coxa). Distally simple, the most distal ‘segment’ with flattened ribbon-like setae as seen in SEM and without any apparent groove or other structure medially in ventral side to hold in the posterior gonopods although they are pressed very tightly together. Accessory lobe on ‘segment’ below the knee. Setae abundant on whole structure.

POSTERIOR GONOPODS. With an indeterminate number of segments. Distally a simple hyaline tip, with one or more small nicks close to the tip.

• thinner body for the number of tergites

• more regular tubercles on the pro- and metazonites, also including tubercles that resemble anchors in lateral view. Note however that this could be due to the state of preservation of the specimens looked at or perhaps a function of age/damage during life?

Specimens of C. adisi sp. nov. were only found at Lago Janmauri which is a mixed water site described by Amaral et al. (1997) that is seasonally flooded by river water. They were collected using both Kempson extractors, which sample the soil invertebrates, and arboreal trunk traps that sample the fauna walking up or down trees (for more details of traps see Adis 2002). Specimens were caught on trunk traps placed on Hevea spruceana (Spruce ex Benth.) Müll.Arg. or rubber tree ( Euphorbiaceae ), and Virola surinamensis (Rol. ex Rottb.) Warb. ( Myristicaceae ), with the majority caught on the Hevea . The experiment was designed to follow the movements of various invertebrates as the forest was flooded, see for example Morais et al. (1987) for more details. The distribution of C. adisi sp. nov. in different samples is given in Table 2. From this it can be seen that the species appears to spend that part of the year when the forest is not inundated in the soil. Once flooding starts it moves onto the trees where it seems to live for the remaining part of the year. The largest sample was in July 1987 when 16 individuals were caught moving down the tree trunks, presumably heading to the ground and the soil at the end of the inundation period. Most of the individuals from the Kempson extractors were very small, suggesting that the eggs are laid in the forest litter or soil and the youngest stages pass their life here.

J. Adis (pers. com., 1994) noted that the mixed water forest is regarded as an ecotone between the black and white water inundation forests and that ‘the species should represent in part those occurring in the black water forest at Taruma Mirim’. Columbianum nahvalr sp. nov. was found in the secondary, noninundated forest at Tauma Mirim.

The siphonophorids have a reputation for being difficult to study, and that has been borne out by the current study. While the genus Columbianum seems to be well defined by the shape of the head and rostrum, it has been difficult to find other, reliable characters to distinguish clearly between species, and there is considerable variation within species and even individuals. More information about the postembryonic development might help evaluate the reliability of some of those discussed here. 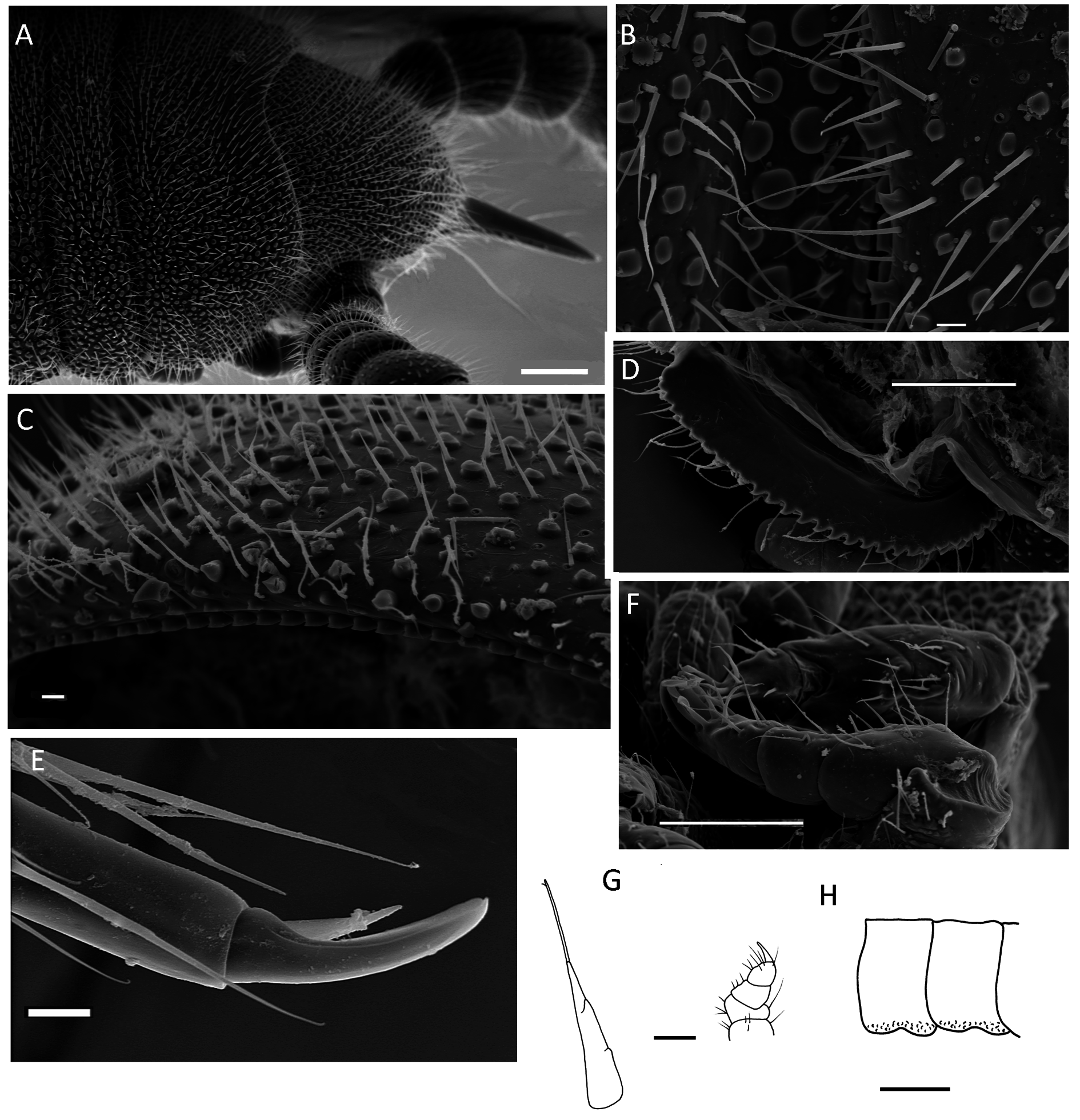