Morphological diagnosis. A large-sized lacertid lizard, maximum snout-vent length ( SVL) = 99.3 mm, tail 1.67 to 1.89 times longer than body length ( SVL), hindlimbs relatively long ( HLL / SVL ratio 0.6–0.8); subocular scale reaching to the edge of the mouth, 5–7 (mainly 6, rarely 5) anterior to subocular; dorsals 56–67; ventrals in 14–17 oblique longitudinal series; frontal separated from supraoculars; the height of the first two to three transverse rows of ventral scales in the pectoral region more than its breadth; 17–21 femoral pores on each side, separated medially by 1–4 scales (mainly 3, rarely 1), the space between the femoral pores less than one–fourth length of each row; toes without fringe, encircled by three scales in a single series of 22–27 unicarinate and bicarinate scales underneath; the tip of the fourth toe reaches to the forelimb and extends to just behind the collar. The adult specimens are grayish in life with four series of longitudinal black ocelli on the dorsum originating from behind the parietals and extending onto the tail; on each lateral side, a broader dark stripe originates from behind the eye and continues onto the tail with disconnected white round ocelli at the margins as well as white ocelli inside the stripe.

Etymology. The species epithet “ rafiqi ” is taken from the first name of late Rafique Ahmed Rajput (1968– 2008) to whom the new species is dedicated. The deceased Rajput served in Sindh Wildlife Department from 1986 till his demise. With no formal education in wildlife research, conservation and management, his passion for the conservation of wildlife in Pakistan remain unparalleled. From collecting the first-ever data of Ursus arctos isabellinus in the high-altitude Deosai Plateau, Gilgit-Baltistan, to the faunistic studies in the Indus River Delta and desert areas, he was a symbol of hard work. He also has very sound techniques for the collection of lizards and snakes. Unfortunately, during one such endeavor for gathering faunistic data, he collected a juvenile venomous krait, Bungarus sp. (possibly B. persicus ) from Jiwani town, Gwadar District, Balochistan and mistaken its identity with non-venomous Lycodon species. On the morning of October 13, 2008, when he was shifting the live snake from a container to permanently preserve it for research purposes, the snake bit him multiple times.After a couple of hours, Rajput felt severe pain, anxiety and dizziness. He was immediately taken to the hospital in Karachi, where the doctors told his relatives that anti-snake venom is not available and asked them to get it from the pharmacy market. By the time the anti-venom was arranged, Rajput breathed his last.

Head slightly broader than the neck.Head shields including nasals,frontonasal,prefrontals,frontal,frontoparietals, interparietal and parietals are smooth and convex. Nasals moderately swollen, three nasals, the lower in contact with two supralabials on both right and left side and in contact with the rostral ( Fig. 4D View FIGURE 4 ). Supranasals in contact with rostral but lack such contact with first supralabial, the suture between them is 3.7 times the length of frontonasal, whose breadth is slightly more than its length; length of prefrontals 1.6 times its width, forming a median suture; length of frontal ca. 1.8 times as long as broad, its length slightly less than its distance from the tip of the snout, narrow behind; parietals smooth, slightly longer than its width; interparietal smooth, more than half the length of frontoparietals, about equal to the suture of frontoparietal; no occipital. Two large supraoculars, about equal in size, the space anterior to supraoculars filled by few small and three to five larger granules; both supraoculars in contact with frontal of their sides while separated from supraciliaries by a series of granules ( Fig. 4C View FIGURE 4 ); six supraciliaries, first longest, its length shorter than its distance from the first loreal. Rostral pentagonal, broader than high, narrower beneath than above; anterior loreal slightly higher than wide, shorter than the second loreal which is longer than high; supralabials 10 on the right side, 9 on the left side; subocular keeled just below the eye, bordering the mouth, wedged between sixth and seventh supralabials on the right side and fifth and sixth supralabials on the left side ( Fig. 4D View FIGURE 4 ). Temporals smooth, a large scale above ear; auricular denticulation indistinct or three small scales forming slight denticulation anteriorly. Lower eyelid covered with numerous small semi-transparent scales.

Six infralabials on the right side, seven on the left side, gradually increasing in size posteriorly. Five pairs of chin shields; anterior three completely in contact, the fourth pair separated by 10 to 11 smaller gulars in a straight line, fifth not in contact with infralabials, separated by a single row of scales. Collar curved, free, serrated and composed of ten plates larger than adjacent gulars, the middle one quite enlarged than others. Gular fold distinct, 32 gular scales in a straight line between the symphysis of the chin shields and the collar ( Fig. 4B View FIGURE 4 ).

Dorsal scales granular, smooth, 62 across the middle of the body. Ventral plates broader than long (except for outermost series), forming oblique longitudinal series of 16 plates across mid-belly and 29 transverse rows counted from behind collar to vent; first three rows of ventral scales in the pectoral region behind collar longer than broad, the first row is twice as long as broad. Precloacal region with a pair of the enlarged median plates just above the vent, surrounded by six large scales.

Forelimb ca. 1.4 times longer than the head, the upper surface of the arm with rhombic, smooth scales. Scales on the upper surface of hindlimbs similar to dorsals, equal in size; ventral surface of hindlimbs covered by enlarged plates, the ventral surface of the tibia with one row of very large and one comparatively smaller plates; the tip of the fourth toe reaches to the forelimb and extends to just behind the collar; 21 femoral pores on the right side, most of the left side damaged, the two femoral pore series separated by two scales, length of the interfemoral space not greater than one–fourth length of each row. Toes slender, compressed, with no fringe; subdigital lamellae unicarinate, in a single row of 25 scales under the 4th toe, a total of three scales around the 4 th toe. Upper caudal scales oblique, truncate, strongly and diagonally keeled, 30 scales in the 9 th –10 th annulus behind the postcloacal granules.

Coloration in life. The adult specimens are grayish in life with four more or less regular rows of black spots on the light dorsum, originating from behind the parietals, smaller on the nape, larger on the middle of the dorsum, disappearing on proximal one-fourth of the tail. The middle two rows of black spots have white spots along each black spot of the rows. On each lateral side, a broader dorsolateral dark stripe originates from behind the eye and continues onto the tail with disconnected white ocelli at both margins as well as white ocelli inside the stripe; next to the broader dark stripe, a lateral-most stripe is composed of disconnected black ocelli, originating from behind tympanum and reaching to the hindlimb. Upper parts of both hindlimbs and forelimbs with white and black ocelli. Head gray without any markings or spots; labials white with black markings. Belly and underside of tail creamy white, tail dorsum sandy grayish.

The juveniles and subadults are nearly similar in coloration to the adults except for the following details; four longitudinal dark stripes on the body, the outermost originate from anterior parietals on the outer side and continue onto the tail, the innermost originate from the posterior of parietals and merge after running a while on the tail. A broader lateral stripe on each side originates from behind the eye and continues on the lateral side of the body and tail with interspersed white ocelli between the forelimb and hindlimb. The dorsal forelimb and hindlimb are dark gray with white ocelli.

From E. persica , that is partly close in dorsal coloration, pattern and size, E. rafiqi sp. nov. differs in the length of interparietal to the length of suture of parietals (longer vs. shorter), length of frontonasal to its width (longer vs. as long as wide), size of the second loreal scale to first loreal scale (more than three times vs. two times), supracaudals (strongly keeled vs. weakly keeled) and tail coloration in the juveniles (sandy grayish vs. bluish).

Besides distant distribution, Eremias rafiqi sp. nov. differs from the recently described E. fahimii by its larger size (SVL up to 99.3 mm vs. 56.0 mm), more SDLT 4 th (22–27 vs. 20–21), the greater number of scales separating the femoral pores (1–4 vs. 1) and the dorsal color and pattern in adults (dorsal stripes broken into ocelli vs. dorsal stripes persistent throughout life).

From E. isfahanica , E. rafiqi sp. nov. differs in the following morphological characters apart from its distant distribution: higher count of supralabials (8–10 vs. 6–8), 5–7 (mainly 6, rarely 5) of them located anterior to subocular (vs. 5), lower count of collars (8–12 vs. 12–15) and the dorsal color pattern in adults (dorsal stripes broken into ocelli vs. dorsal stripes persistent throughout life).

From E. killasaifullahi sp. nov., E. rafiqi sp. nov. differs in the following morphological characters: color pattern (striped and ocellate vs. ocellate), larger size (SVL up to 99.3 mm vs. 70.5 mm), contact of infranasal with the rostral (in contact vs. separated), a higher number of ventral scales in a single row from posterior edge of collar to the vent (29–33 vs. 25–29) and a generally higher count of gulars (29–33 vs. 20–33).

Habitat and natural history. The type locality and the localities of paratypes (Tanishpa, Kunder and Ashewat) of E. rafiqi sp. nov. are located in the Torghar mountains (means “Black Mountains”), constituting the northern-most part of Toba Kakar Range which is a southern offshoot of the Sulaiman Mountains in the Hindu Kush Mountain system, lying ca. 60 km from the border with Afghanistan ( Fig. 7A View FIGURE 7 ). The Torghar mountains are very rugged semiarid sandstone ridges with an average elevation of 2,400 m and is approximately 90 km long and vary from 15 to 30 km in width. This region is characterized by having dry temperate ecology, with sparse vegetation. A great deal of information about the Torghar mountains including annual weather conditions, ecology, vegetation and sympatric fauna is provided in Masroor et al. (2020b). The species is also found in the Nushki district, ecological part of the Chagai desert (Registan desert, Afghanistan), lying ca. 340 km in aerial distance from the Torghar mountains.

All the specimens were collected between 11:00 am to 02:00 pm. Interestingly, specimens in the Tanishpa, Kunder and Ashewat were caught in the barren area of mixed loamy and sandy habitats at the foothills of Torghar mountains ( Figs. 7B, C View FIGURE 7 ). On the other hand, specimens in the Khar (Nushki district) were collected mostly from the alluvial plain, with dominant vegetation of Haloxylon persicum, Lyceum shawii, Saccharum griffithii, Chenopodium album, Periploca aphylla, Euphorbia prostrata and others. FIGURE 1. Maximum likelihood phylogeny of available species of the Aspidorhinus subgenus (Eremias) based on cytochrome b sequences. Black circles denote nodes with strongly supported UFB values. The distribution (orange layer) of the subgenus Aspidorhinus with type localities of currently recognized species is adopted and modified based on Mozaffari et al. (2020) and Khan et al. (2021). FIGURE 2. (A) The map of northern Balochistan in Pakistan, southern Afghanistan and eastern Iran with the localities from where morphologically examined specimens were collected: 1—Khar, Nushki district, 2—Tanishpa, Killa Saifullah district, 3—Kunder, Killa Saifullah district, 4—Ashewat, Zhob district. Their cytochrome b and Rag1 sequences (if available) are related to particular locality of the collection (GenBank accession numbers for Rag1 are in parentheses). (B, C) The network analyses of the intraspecific haplotype diversity based on cyt b and (D) relationships between available members of the subgenus Aspidorhinus on Rag1 sequences are presented on white backgrounds (see also Appendix 1). For the Rag1 network, different alleles of a single heterozygous specimen are coded as “a” and “b” variants, while “ab” indicates an allele of a homozygous specimen. Dashes on network branches represent number of mutation steps and black dots missing haplotypes. Coloration in networks corresponds with the tree presented in Fig. 1. 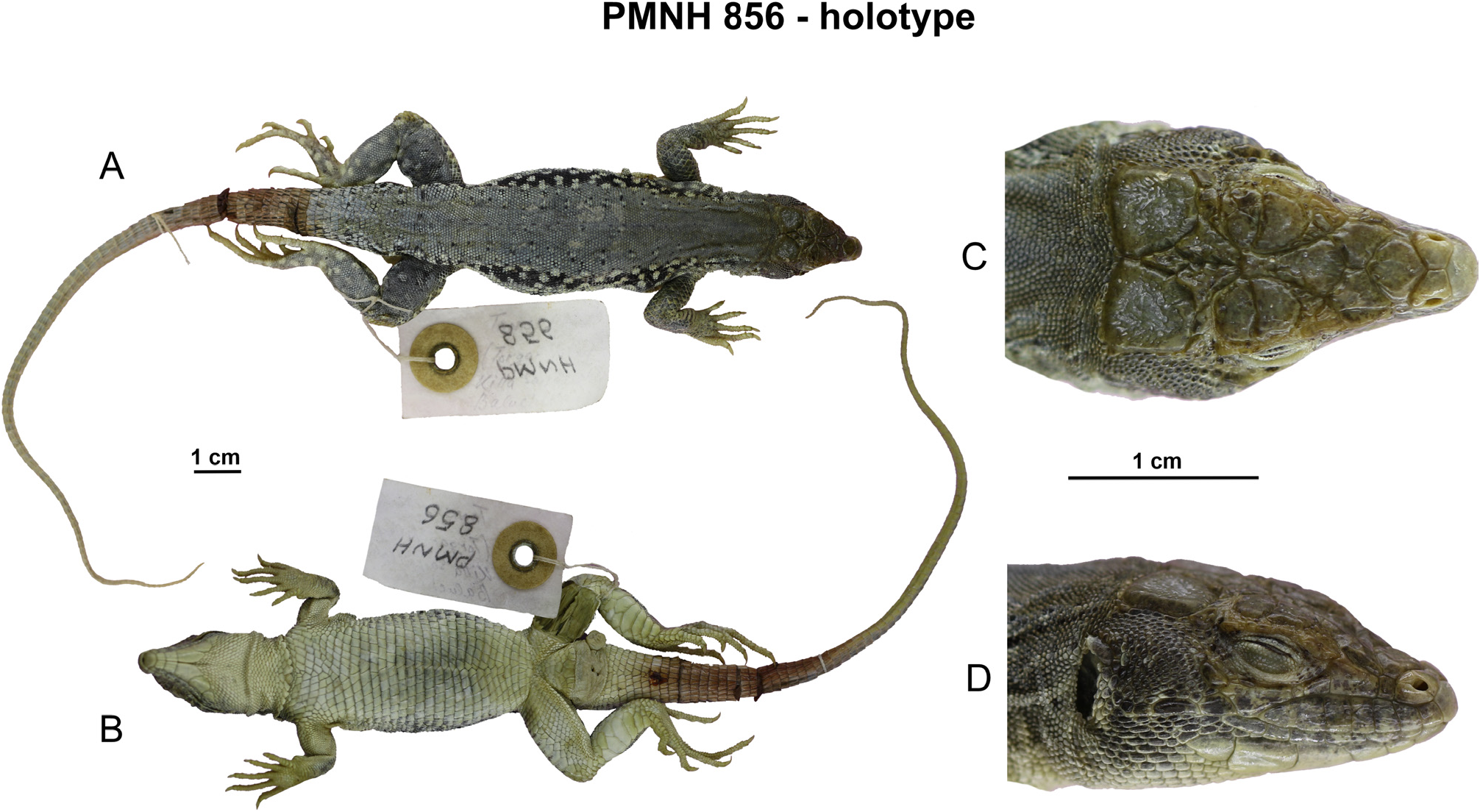