Diagnosis. The combination of the following features distinguishes the new species, H. taphorni  , from all congeners: presence of an elongate dorsal fin (more evident in adult males) with an anterior dark area; concentration of dark pigments on the distal portion of the second through fourth branched anal-fin rays (resulting in a dark dash in this area); presence of a single humeral spot and caudal spot reaching the tip of the middle caudal-fin rays; premaxillary teeth of the outer row bearing only three cusps; three scale rows below the lateral-line. A detailed comparison to congeners that are more similar is provided in the Remarks below.

Nostrils closer to anterior orbital margins than to each other. Suparaoccipital process short, its tip not reaching the vertical through posterior margin of opercle.

Sexual dimorphism. Adult males with very small hooks on the first five to seven branched anal-fin rays. The hooks are located on the last basal segments and on the segments of the posterior branch of each hooked ray. All hooks are backward pointed and varying in number from two to four per ray segment. Adult males also present a more elongate dorsal fin as a secondary sexually dimorphic feature (fig 3).

Distribution. Known only from the type locality, the Río Caura, a tributary of Río Orinoco, Venezuela (fig. 4).

Etymology. This species is named after Donald C. Taphorn, collector of our new species and whose work has greatly contributed to our knowledge of Neotropical ichthyology.

Géry (1977) listed 13 species in the H. ocellifer  -group, including those with one humeral spot ( H. megaceps  , H. caudovittatus  , H. barrigonae  , H. guyanensis  , H. iota  , H. boulengeri  , H. vorderwinkleri  , H. schmardae  , and H. melanochrous  ) and with two humeral spots ( H. pretoensis  , H. luelingi  , H. ocellifer  , and H. pulcher  ). Hemigrammus taphorni  differs from H. megaceps  , H. caudovittatus  , and H. barrigonae  by presenting a longitudinal faint stripe extending from the humeral spot to caudal spot, which is not observed in the latter. H. taphorni  is distinguished from H. guyanensis  by lacking the iridescent spots flanking the caudal peduncle posteriorly (vs. present in the latter). H. taphorni  is promptly distinguished from H. iota  and H. vorderwinkleri  by presenting 21–24 branched anal-fin rays (vs. 15–17 and 18 anal-fin rays, respectively). H. taphorni  is easily distinguished from H. schmardae  by possessing up to three maxillary teeth with five cusps (vs. one or two maxillary teeth conical or with three cusps in the latter). The rare species from rio Madeira, H. melanochrous  , presents only 17 branched anal-fin rays (vs. 21 – 14 in H. taphorni  ) and has a greatest body depth of 24.0% (vs. 32.7–42.2 % in H. taphorni  ).

Within the H. unilineatus  -group, H. taphorni  is most similar in its color pattern to H. elegans  , a species originally described from rio Tapajós basin. Taphorn (1992) tentatively identified 50 specimens from Río Orinoco drainages as H. aff. e legans. The examination of images of the syntypes of Tetragonopterus elegans  (= H. elegans  ), and its original ( Steindachner, 1882) and subsequent descriptions ( Eigenmann, 1918; Géry, 1977) demonstrated that H. taphorni  is promptly distinguished from H. elegans  by the presence of three horizontal scale rows below the lateral-line (vs. four or five in H. elegans  ), and by the presence of premaxillary teeth bearing only three cusps (vs. premaxillary teeth bearing five cusps in H. elegans  ). An elongate dorsal fin has not been mentioned or illustrated in the available descriptions of H. elegans  or detected in the analyzed syntypes. The shared color pattern of H. taphorni  and H. elegans  may be an indicative of a close relationship, but there is presently no cladistic evidence supporting Hemigrammus  as a monophyletic unit. Weitzman & Palmer (1997) discussed that H. unilineatus  and similar relatives may belong to their rosy tetra clade based on certain aspects of their color pattern, such as a darkened dorsal-fin blotch or area, and supplementary anatomical evidence, such as the sexually dimorphic elongate dorsal fin, both of which are present in H. taphorni  . Thus, H. taphorni  , as well as H. elegans  , should be added to Weitzman & Palmer’s (1997) list of putative members of the rosy tetra clade in future phylogenetic investigations. 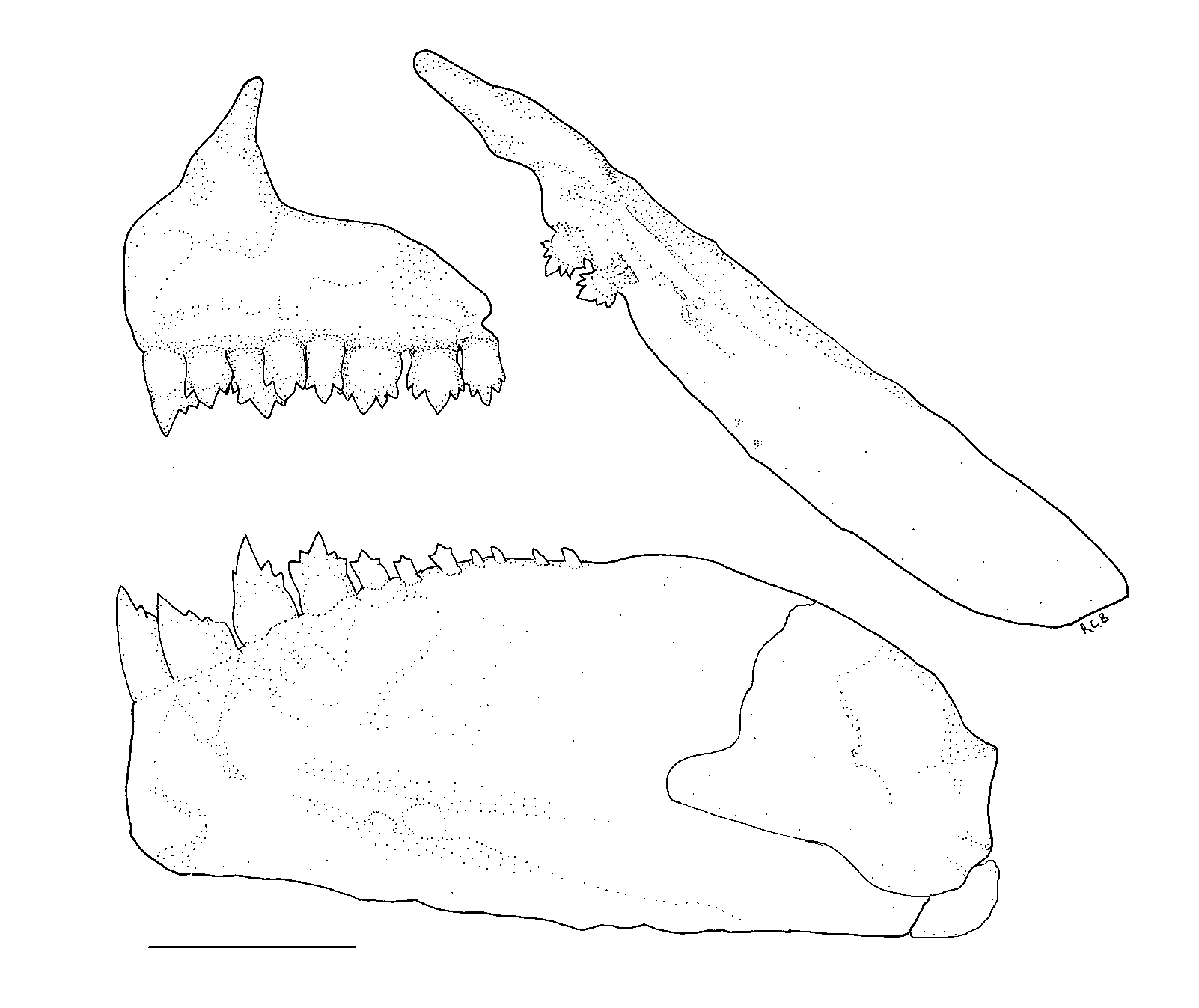