Dorsal profile of head sloping gradually dorsally at about a 45 ° angle to occiput. Occiput prominent, forming a hump, then gradually sloping posteriorly to caudal. Snout blunt. Nostrils single, small, about on a horizontal with or just below dorsal margin of orbit and immediately anterior to it. Mouth terminal, oblique, its angle about 45 °, tip of upper jaw slightly posterior to tip of lower jaw but dorsal to it, not included. Teeth very slender, needle like, in about 28 oblique rows of up to seven or eight teeth each in both jaws. Premaxillary teeth forming narrow band on anterior 1 / 3 of jaw; mandibular teeth similarly arranged, but band is shorter, about 1 / 4 of jaw length. Lower jaw unusual in having an anteriorly projecting blunt spine above and forward of ventrally oriented blunt tip of retroarticular. Judging from diameter of orbit, eye apparently large, but missing. Gill opening damaged, probably more or less vertical; opercle long, slender and slightly curved, pointing posteroventrally but primarily down; lower margin supported by at least two, possibly three emarginate branchiostegal rays. Membrane of opercular flap damaged, above pectoral base and possibly extending ventrally in front of a few rays. Gill rakers not examined. Pores mostly missing with skin, coronal pore apparently absent.

Pectoral fin dorsal ray on horizontal between lower margin of orbit and posterior corner of mouth. Rays of upper and lower lobes damaged, lengths unknown. Both right and left fins of 15 rays each, (6 + 4 + 5 R, 7 + 3 + 5 L), rudimentary rays absent. Lowest (most anterior) ray of lower lobe slightly posterior to a vertical through posterior margin of orbit. Pectoral girdle not examined.

Distribution. Known only from the holotype, collected in shallow water about 120 m deep off the Otago Canyons to the east of southern New Zealand.

Etymology. The name cryptocaeca  , from the Greek krypto -, hidden and the Latin caecum, blind, referring to the difficulty of finding the pyloric caeca in this species.

Comparisons. Psednos cryptocaeca  differs from the other known species of the region in the extreme dorsal position of the pyloric caeca and in having a retroarticular with two spines, one at the posterior angle of the lower jaw and the other, blunter and forward of it and pointing anteriorly. It may be easily confused with P. platyoperculosus  and P. n e m n e z i, but see those descriptions below for comparison. 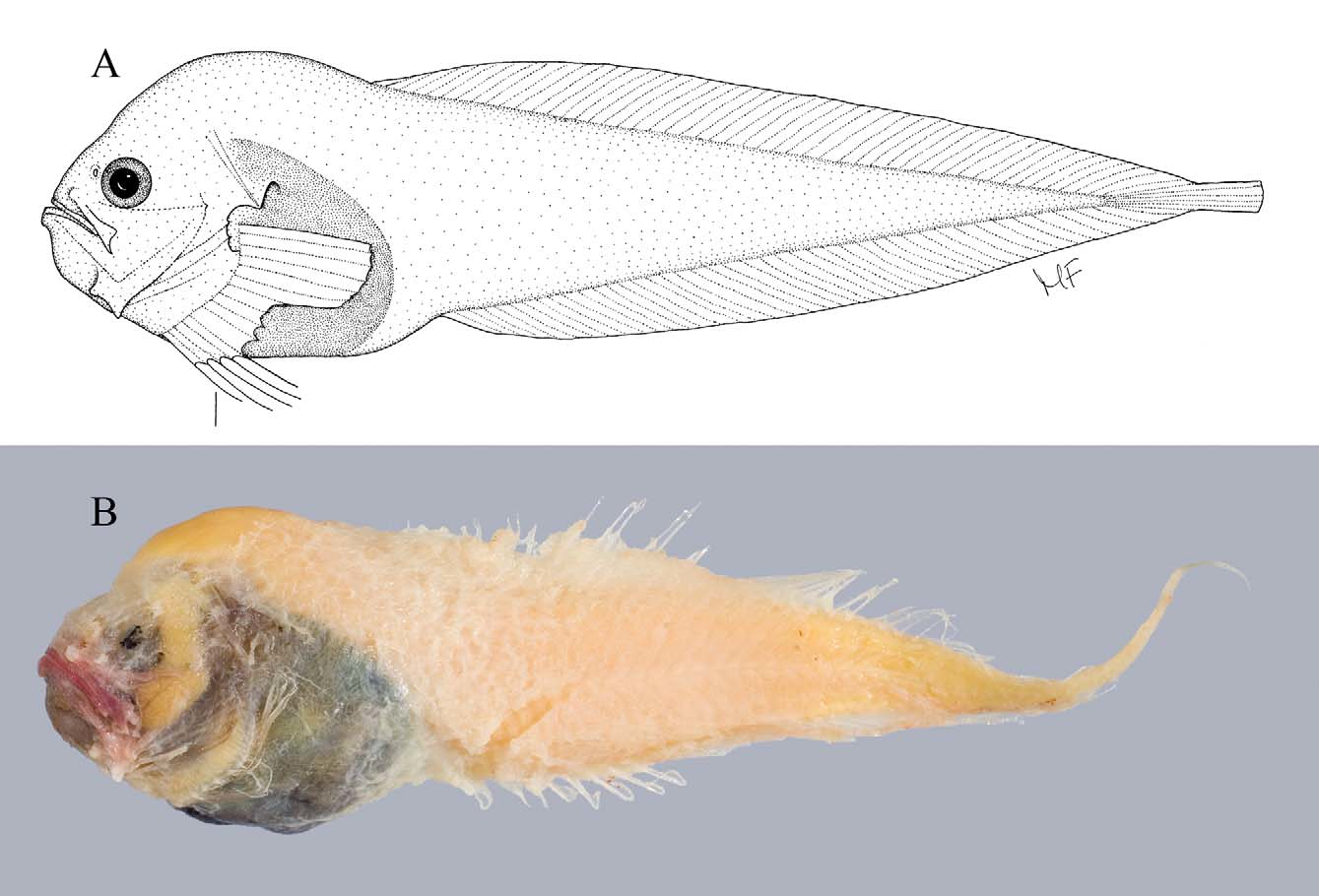