Colouration in life. Juveniles of about 80–100 mm SL ( Fig. 3AView FIGURE 3) dorsolaterally brown. A black band on side of body, originating at anterior margin of snout, extending to caudal-fin base and beyond, onto median rays of caudal fin. Light brown stripe extending from opercle to caudal-fin base, separating brown dorsal side and blackish ventral side of body. Head and body whitish cream ventrally. Caudal fin with an ocellus on dorsal half, formed by large black spherical spot rimmed by wide orange ring. Pectoral, pelvic and anal fins hyaline. Interradial membrane of dorsal fin with irregular pattern of black lines. Pupil outlined by yellowish orange rim, iris black with tinge of orange.

Habitat, distribution and natural history. Channa ara  occurs primarily in the deep pools in the Mahaweli River and its tributaries. It has also been recorded from reservoirs in the Mahaweli catchment (Victoria and Randenigala: Fig. 1AView FIGURE 1). In June 2014, the first author observed around 20 juveniles of ~ 80–100 mm SL in shallow water (~ 60–80 cm deep), among submerged roots, close to the bank, at the mouth of a stream draining into Badulu Oya of the Mahaweli basin, they were guarded by a pair of adults. The highest elevation from which we have recorded C. ara  is at Kandy, about 500 m asl.

Molecular results. Three cox1 haplotypes were observed among Marulius group fishes collected in Sri Lanka, none of which have previously been observed in fishes collected in neighbouring continental regions. The three haplotypes correspond to Channa ara  from the Mahaweli Basin (H1, n =4), C. cf. ara  from the southwestern wet zone (H2, n =8), and C. marulius  from the northern dry zone (H3, n =1). The relationship of Sri Lankan haplotypes to C. marulius  haplotypes from continental regions ( India and Myanmar) is illustrated in Fig. 1BView FIGURE 1, with uncorrected pairwise genetic distances among all members of the Marulius group given in Table 3.

With the exceptions of Channa marulius  and C. cf. ara  , C. ara  differs from all other species in the Marulius group by a minimum of 8% uncorrected pairwise genetic distance for cox1 ( Table 3). 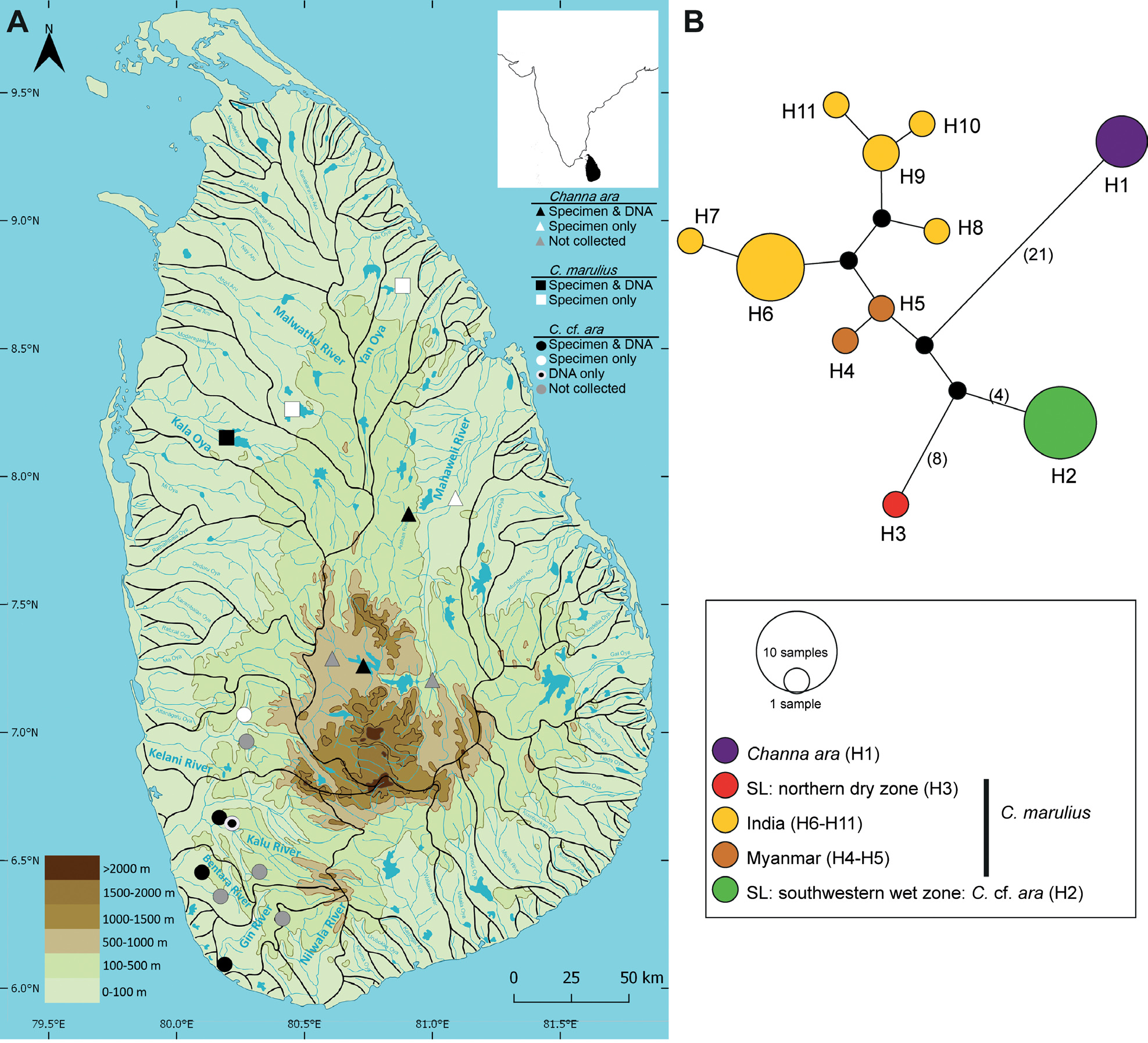 FIGURE 1. A, Map of Sri Lanka showing geographical origin of samples of the Marulius group used in this study. Specimens referred to as ‘not collected’ were observed in the wild but not included in the molecular or morphological analyses. The black lines represent drainage margins; B, median-joining haplotype network for the Marulius group in Sri Lanka is based on the analysis of a 654 bp fragment of the cox1 gene. The areas of the circles are proportional to the number of individuals sharing a given haplotype. The number of mutational steps>1 is indicated in parentheses. Black circles are hypothetical nodes. Legend colours correspond to the region or species. 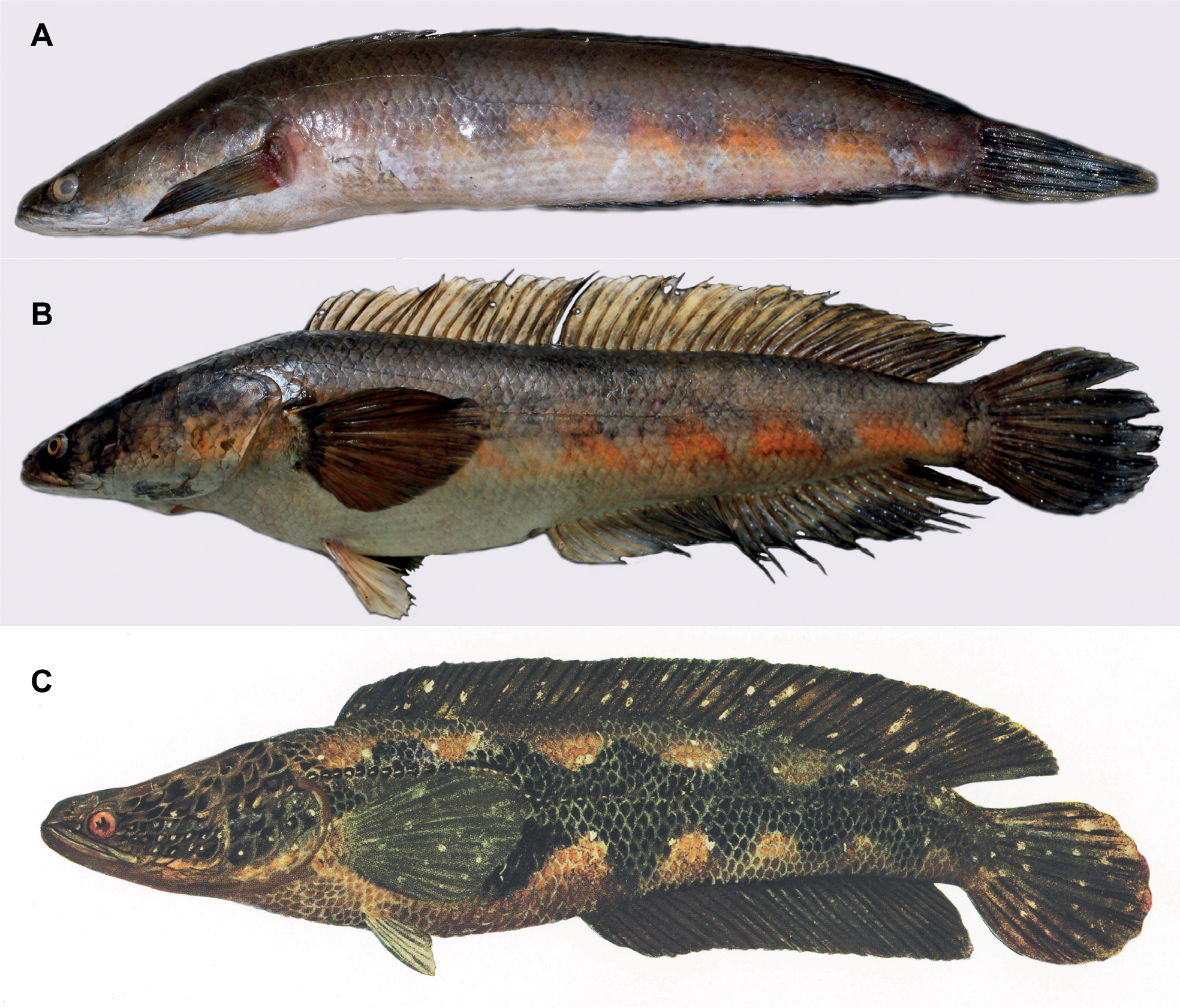