DESCRIPTION: Of the two calcanea, one lacks the epiphysis and the other is broken at the sustentacular talus. The calcaneus has a long, strong tuber, which is about half of the total length of the bone (measured from the posterior edge of the calcaneoastragalar facet) ( fig. 11 View Fig ). In dorsal view, the calcaneoastragalar facet and the sustentacular facet are aligned roughly at the same level. The calcaneoastragalar facet is a narrow convex band extended in a proximodistal direction, nearly parallel to the long axis of the bone. The sustentacular facet is somewhat rounded and concave. A narrow sulcus calcanei separates the two facets. In plantar view, the anterior plantar tubercle is low and blunt. The peroneal process is strong. Between the process and the anterior plantar tubercle is a broad, concave area. A distinct pit is present on the plantar side of the peroneal process. The dorsal side of the peroneal process bears the calcaneoastragalar facet. In distal view (not shown), the calcaneocuboid facet is large, concave, and oblique, with the lateral edge extending more distally than the medial one; the medial edge is notched. Between the notch and the broad groove for the tendon of the flexor fibularis—on the plantar side of the process bearing the sustentacular facet—is a concave area with a rough surface, in which resides a small foramen of unknown function. There is no calcaneal canal.

COMPARISON: Thus far there is only one named species of Gomphos   , G. elkema   , from the Lower Eocene of Asia. The species was first known from the Bumban beds of the Naran Bulak Formation, Mongolia ( Shevyreva et al., 1975; Zhegallo and Shevyreva, 1976; Dashzeveg and Russell, 1988). Additional material assigned to this species was discovered recently from the Huheboerhe section of Inner Mongolia ( Meng et al., 2004) and from the Bumban beds of the Naran Bulak Formation, Mongolia ( Meng et al., 1999). The calcaneus of Gomphos   is similar to that of Mimolagus   ( Bohlin, 1951; Bleefeld and McKenna, 1985; Szalay, 1985) but is significantly smaller. In both genera, the calcaneus shares several unique features: the tuber of the calcaneus gradually expanding distally; the calcaneoastragalar and the sustentacular facets being aligned at the same level; the calcaneoastragalar facet being a narrow convex band in a distoproximal orientation, nearly parallel to the long axis of the bone; a distinctive pit being present on the plantar side of the process bearing the calcaneoastragalar facet; astragalonavicular facet on the head of the calcaneus with similar orientation; and the astragalus being ventrodorsally (or anteroposteriorly) narrow ( Meng et al., 2004). The calcaneus of Gomphos   is therefore distinctive from those of other Paleocene–Eocene Glires   . In general shape, the calcaneus of Gomphos   and Mimolagus   is most comparable to that of lagomorphs, but in both genera some primitive calcaneal features, such as absence of a calcaneofibular facet on the calcaneus and the distal portion of the calcaneus not elongated, differentiate them from lagomorphs. 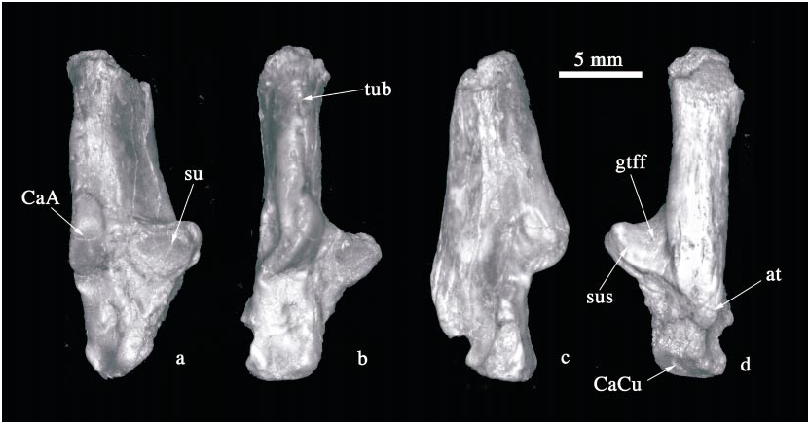