Etymology. The species is named in honor of Dr. Juan Carlos Espinoza, who owns and has protected the forest in La Guardia for the last 30 years, and who also granted us permission to conduct research on his land.

The average annual precipitation in La Guardia is 1,085 mm with a mean annual temperature of 24.1°C (data for the close city of Santa Cruz, Abrahamczyk et al. 2013). According to the biogeographical regionalization by Navarro & Ferreira (2011), the ecosystem in La Guardia is considered as mesophytic-phreatophytic Chiquitano forest of the alluvial plains of Santa Cruz department. Tree indicator species for this ecosystem are Albizia niopoides (Spruce ex Bentham) Kuntze  and Gallesia integrifolia (Sprengel) Harms ( Navarro & Ferreira 2011)  .

Because both locations are close to or in a transition between sub-Andean Amazon and Chiquitano forest ( Fig. 1View FIGURE 1 C), it is difficult to determine if Icimauna espinozai  sp. nov. is more closely related to one of both forest types. Additionally, both ecosystems may contain elements from the relatively close Andean forests in the west and subtropical deciduous Gran Chaco forests in the south (see Fig. 1View FIGURE 1 C).

Mimicry. Over 200 species of Cerambycidae  in 21 tribes are suggested to mimic species of the beetle family Lycidae ( Linsley 1961)  . In species of Icimauna  , the body color along with a slender habitus and apically less extended elytra mostly resemble species of the Lycidae  genera Emplectus Erichson, 1847, Lycomorphon Pic, 1922  , Macrolygistopterus Pic, 1929  , Metapteron Bourgeois, 1905  , or Mesopteron Bourgeois, 1905  , which are all present in the Neotropics. Because the second author was not aware of the significance of the discovery of Icimauna espinozai  sp. nov. and its mimicry during the field work of the current study, Lycidae  species were not systematically sampled. Nevertheless, one of the few Lycidae  that were collected in the habitat of I. espinozai  sp. nov., most likely a species of Emplectus sp. (E. Nascimento, pers. comm.), had a similar body length and shape and color pattern ( Fig. 2View FIGURE 2 E) and may represent a model for I. espinozai  sp. nov. The long hairs on the antennae of the latter may mimic the serrated antennae of the Emplectus sp. Further collecting is needed to assess if there are other sympatric Lycidae  models that resemble more closely to I. espinozai  sp. nov. 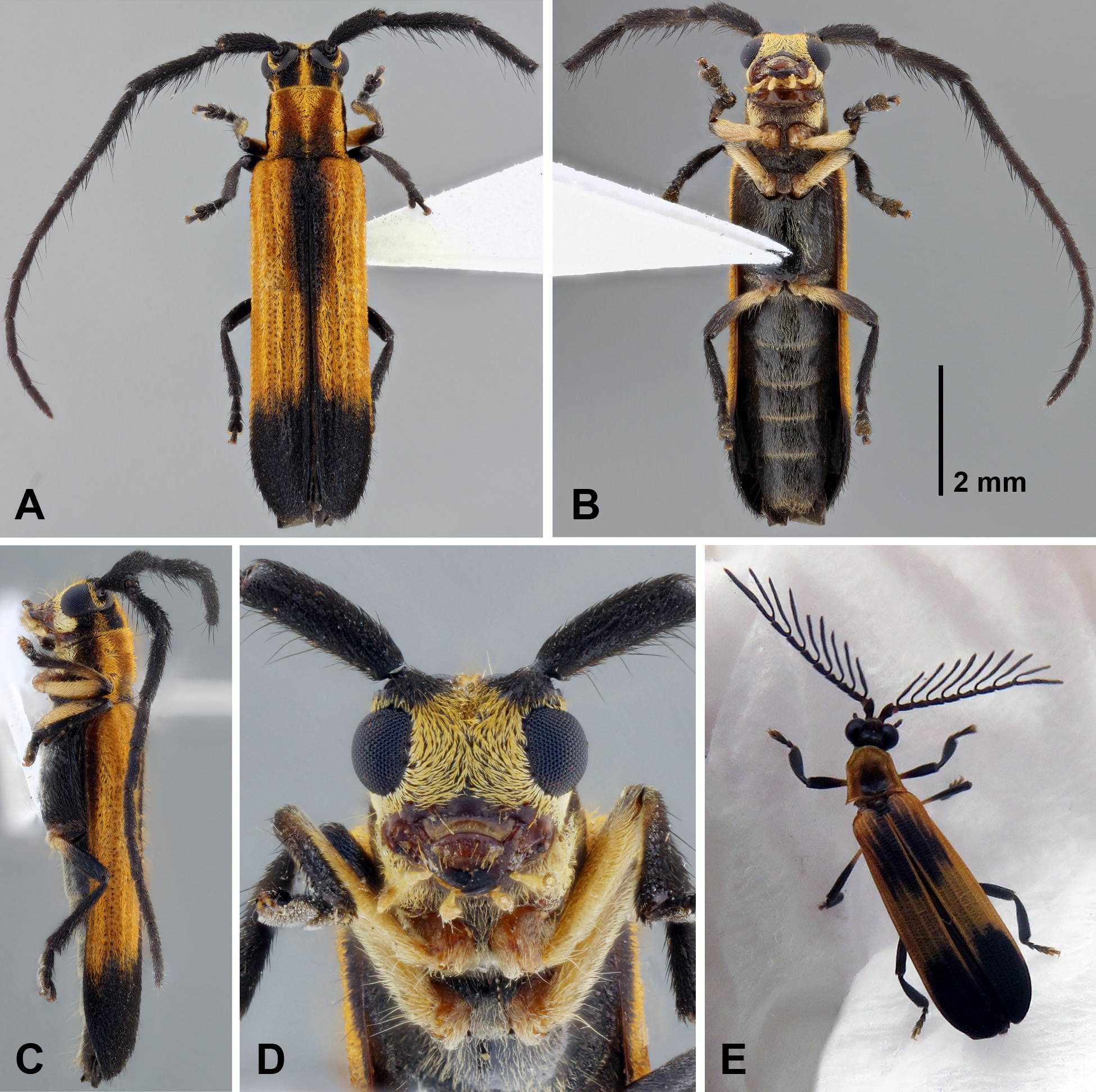