Diagnosis. A species of Entomocorus   having pelvic and pectoral fins densely covered with dark pigment, at least along anterior rays, in contrast to the hyaline fins of its congeners.

Color in live specimens. The pigmentation pattern described above was observed in the living specimens, however, when alive, the specimens exhibited yellow pigmentation on the dorsal and adipose fins and the dorsal lobe of the caudal fin.

Sexual dimorphism. The holotype of Entomocorus melaphareus is presumed to be a nuptial male, based on its similarity in appearance to nuptial males of Entomocorus gameroi (called terminal dimorphic male by Mago-Leccia, 1983, pers. obs.). The paratype is a juvenile or a nonbreeding male in which the maxillary barbel is ossified, but not fully developed. Differences between the two specimens are presumed to be sexually dimorphic characters, inasmuch as Mago-Leccia (1983) did not report on any externally evident character that distinguished sexually mature females from non-breeding males or juveniles of either sex. The following description is a summary of characteristics of the nuptial male that are usually not found in non-breeding individuals.

The dorsal-fin spine is proportionally more elongate and slender. The adpressed fin extends to past the origin of the adipose fin, rather than falling far short of the adipose-fin origin. The dorsal-fin spine has few weak serrations on the distal half of its anterior margin, and small rounded unculi. The first ray of the pelvic fin is greatly elongated compared with that of the paratype, extending to level of the caudalpeduncle origin. The ray is expanded into a flattened paddle, with the dorsal surface of the paddle densely covered with small, rounded, spiny, anteriorly directed unculi.

The maxillary barbel is enlarged and rigid for its basal one-half, from the expanded ossification of the maxilla. The ossified portion of the barbel is arched and fits into a shallow groove that extends across the ventral margin of the orbit. The dorsal and medial surfaces of the ossified portion of the barbel are covered with unculi. A row of overlaping, scalelike unculi extends from the distal extent of the ossified barbel to near the base, a character previously mentioned by Ferraris & Vari (1999). The unculi are small and rounded basally as well as along the medial margin of the barbel.

The snout appears to be broader and somewhat depressed; its appearance apparently due to the enlarged size of the maxilla at the anterolateral margin of the snout. The dorsal surface of the snout is covered with small, rounded unculi, which are larger and denser anteriorly, and extend posteriorly to the nuchal plates.

The anal-fin is highly modified when compared with the fin of the non-breeding specimen. The base of the three unbranched rays and the three anterior most branched rays are elongated and anteroposteriorly expanded. The distal parts of the expanded rays are either in contact with the more anterior or posterior rays, or nearly so, such that the distal part of the anterior extent of the fin is a rigid, blunty rounded paddle-like structure. The anterior unbranched anal-fin rays that do not contribute to the paddle-like structure are enlarged, but not noticeably elongated. The urogenital opening is at the tip of an elongated, flexible urogenital papilla that originates just anteriorly of the anal-fin origin.

Dermal unculi on this species have a pattern unique among auchenipterids. The presence of dermal unculi on the pectoral, pelvic and dorsal-fin rays is recorded for the first time in auchenipterids. Dermal unculi are also present on the dorsal surface of the cranium, a characteristic of several auchenipterid genera, including Auchenipterus, Parauchenipterus, Epapterus, and Pseudepapterus, although not previously described in any detail. A unique characteristic of Entomocorus is the presence of abdominal unculi, distributed in a “V” like pattern and extends from posterior of isthmus and divides into two lateral branches that flank the abdominal region laterally. We first observed this in the holotype of E. melaphareus and, although Mago-Leccia (1983) did not mention the presence of these unculi in his specimens of Entomocorus gameroi, we confirm their presence in the nuptial males examined during this study. It is worth mention that no nuptial males of E. bejamini were found in the examined collections during our comparative study.

Distribution. Known only from two localities on the left bank of the Amazon River below Manaus ( Fig. 3 View Fig 3 ).

Remarks. This species is quite similar in appearance to its two congeners, Entomocorus benjamini   and E. gameroi   . Meristically, the three species are not distinguishable and are most readily diagnosed on color pattern differences. There were no obvious morphometric differences that could be demonstrated with the limited sample size of the new species.

Etymology. The name melaphareus   is derived from the Greek melanos, black, and aphareus, pelvic fin of a tuna, in reference to the unique condition in this species, in which the pelvic fin is dark. 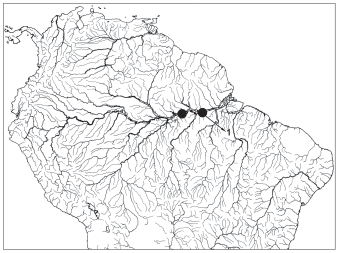 Fig 3. Distribution of Entomocorus melaphareus. Type locality is indicated by the number 1. 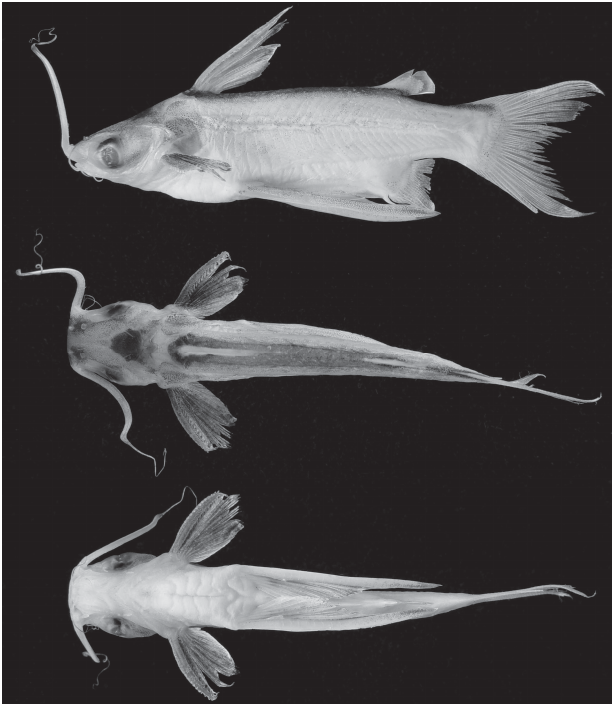