Genetic comparisons among the various purported subspecies have not been performed, except in a few cases. Recent genetic evidence indicates that luteolus, formerly thought to occur only in Louisiana, extends northward to Arkansas, and also may not be differentiated from floridanus in Florida, Alabama, and Mississippi. Sixteen subspecies presently recognized.

Descriptive notes. Head-body 120-190 cm, tail less than 12 cm. Weights vary regionally and seasonally, adult males are heavier (60-225 kg, rarely up to 400 kg) than adult females (40-150 kg, but occasionally more than 180 kg). Straight facial profile, from forehead to nose, distinguishes this species from the partially sympatric Brown (Grizzly) Bear. Muzzle color is usually tan, with short hairs. Sometimes a small tan circular mark occurs slightly above each eye. Eyes are often blue at birth, but turn brown during the first year. Body hairs are rather uniform in length, but much sparser ventrally. A thick underfur is grown in fall, and molted in late spring. Coat color varies from uniformly black to various shades of brown, including cinnamon (reddish-brown) and blond. Brown-phase American Black Bears are common in western USA, less common in western Canadian Provinces, and rare along the west coast of Canada, across Alaska, and in eastern North America and Mexico. Rare white-colored (non-albino) bears occur in coastal British Columbia and gray (often called blue) bears occur in south-east Alaska. White chest markings, from one or more small spots to a large crescent-shaped blaze, occur to varying degrees, but in most populations are uncommon (except in cubs). Claws are short. Hair separates the digital pads from the main foot pad on the front and rear feet. There is also hair between the front (palmar) foot pad and carpal pad, which in normal walking does not touch the ground. Foot pads are shed in winter, when bears are in dens.

Habitat. Found primarily in temperate and boreal forests, but also range into subtropical areas (Florida and Mexico) as well as into the subarctic. They inhabit areas as diverse as dry Mexican scrub forests, Louisiana swamps, Alaskan rainforests, and Labrador tundra (where they occupy the typical niche of the Grizzly Bear). They tend to occupy more forested habitats than the Grizzly Bear, especially where the two species are sympatric. Elevationally they range from sea level to 3000 m, and up to 3500 m for winter denning.

Food and Feeding. American Black Bears are generalist, opportunistic omnivores with diets varying seasonally from herbaceous vegetation (mainly in spring) to roots, buds, numerous kinds of fleshy fruits, nuts, insects in life stages from egg to adult, and vertebrates from fish to mammals, including their own kills as well as carrion. They are also attracted to human-related foods, including garbage, birdseed, corn, oats, apples, honey and brood in apiaries. Feeding increases dramatically in the fall, in preparation for hibernation, and focuses on foods rich in fat. American chestnuts ( Castanea dentata) were once a key fall food in eastern North America, but after blight destroyed this food source in the early to mid-1900s, oak ( Quercus ) acorns and beechnuts ( Fagus grandifolia) became the main fall foods. Farther west, hazelnuts (Corylus), whitebark pine nuts (Pinus albicaulis), madrone ( Arbutus xalapensis), mansanita ( Arctostaphylos ), huckleberries ( Vaccinium ), and buffalo berries (Shepherdia canadensis) are principalfall foods. In arid regions, succulents such as yucca and cacti are important, especially during droughts.

Activity patterns. Mainly diurnal, commonly with an early morning and evening peak in activity and a lull in midday. They tend to sleep through the night, but nocturnal activity may increase during fall, especially in places with clumped, abundant foods. It has been theorized that gut capacity and passage rates of food may limit the length of feeding bouts when intake rates are high, prompting more uniform feeding throughout the day. Alternately, or additionally, large weight gains in fall may pose energetic constraints on feeding. More nocturnal activity also occurs when feeding in areas near human activity. Total time active per day averages 50-60%, but may be less when abundant human-related foods are available. Virtually no activity occurs for the 3-7 months of winter hibernation. In some southern portions of the range, where food is available year-round, only parturient females and those with cubs from the previous year hibernate.

Movements, Home range and Social organization. Home range sizes vary widely, from 3—- 1100 km? among individuals, and from 5-500 km?* among population means. In one unusual case on the tundra of Labrador, Canada, where food supplies were especially sparse, males ranged over 7000 km *, much like Brown Bears in similar environments. Home ranges are compressed where and when food is abundant, and where bear density is high. Likewise, overlap among home ranges tends to be greater where food abundance and bear density are high. Male home ranges are 2-10 times larger than those of females. Males thus overlap a number of potential breeding partners. In some areas, females (but not males) appear to be territorial, with portions of their home range not shared by other females. Female offspring remain within their natal range for a few years, gaining continued protection from the presence of their mother, and gradually expand their range to include other areas and less of their mother’s range as they age. Males, when 1-4 years old, disperse from the natal range. Dispersal distances vary from less than 10 to more than 200 km; dispersers may travel more than 40 km in a week. Seasonal movements, especially to fall mast areas, are common for both sexes, although again, males move farther. In mountainous areas,shifts occur elevationally in accordance with changing food conditions; in flatter terrain, fall movements of 20 km to more than 50 km are not unusual, with greater movements in years when food supplies are particularly sparse. Single-day movements of more than 20 km have been reported. Such fall excursions are commonly referred to as the “fall shuffle”, in reference to the intermixing of individuals from various places (as well as the shuffling gait). Typically, bears that leave their normal home range in the fall return to a more familiar area to den.

Breeding. Mating typically occurs from mid-May to July, but may extend longer, especially in more southerly regions. Copulation induces ovulation. Males locate females by scent. Estrous females actively attract males by scent marking. Both sexes travel widely during the breeding season, and adult males may significantly reduce foraging. Testosterone levels are elevated in breeding males, which increases aggression. Access to females is governed by a male dominance hierarchy and male-male interactions; the extent of fighting among males varies among populations, and is related to density and sex ratios. Male-female breeding pairs may remain together for several days and copulate multiple times. Both sexes breed with multiple partners, but a small proportion of breeding males actually sire offspring. Implantation of the blastocyst occurs in November and birthing in January or February (occasionally December) while the mother is hibernating. Cubs are born highly altricial, weighing 200-450 g, 20 cm in length, eyes closed and nearly hairless. Females give birth beginning at age 3-8 years, depending on food availability and hence their growth rate, and can produce cubs every other year until their mid-to-late 20s. Mothers and cubs leave the birthing den when cubs are 2-:5-3-5 months old. They readily climb trees as a refuge when the mother is off feeding, sometimes several kilometers away. They nurse until autumn, but increasingly consume wild foods beginning in late spring. They den with their mother over their first birthday, and remain with her for 16-17 months. Family breakup is usually instigated by the mother’s breeding activity. Where food is less abundant, the interbirth interval may be prolonged to three or more years, enabling a period of recovery without cubs. Litter sizes range from 1-5, averaging 2-5 cubs in eastern North America and 2-0 in western North America, and tend to be slightly male-biased.

Status and Conservation. Not globally threatened, listed as Least Concern by The IUCN Red Lust, but is listed on Appendix II of CITES under the similarity of appearance provision; this mandates tagging of exported parts legally taken by hunters, so they cannot be confused with parts from illegally taken bears ofother species. With a total population estimated at about 900,000, American Black Bears are more than twice as abundant as all other species of bears combined, even though they exist in only three countries in North America ( Canada, USA, Mexico). Continent-wide, numbers appear to be increasing by about 2% per year, and more than 60% of USA states and Canadian provinces report increasing populations. Approximately 40,000-50,000 are harvested annually by sport hunters in 28 USA states and twelve Canadian provinces and territories. In Mexico, no hunting is allowed, and the species is considered nationally endangered, but appears to be increasing and expanding its range. The Louisiana subspecies (luteolus) was listed as threatened under the USA Endangered Species Act because of severe loss and fragmentation of its habitat combined with unsustainable human-caused mortality. U. a. floridanusis listed as threatened by the state ofFlorida. The Kermode Bear (kermodei) or “spirit bear”, a white-phase American Black Bear, was selected as the official provincial mammal of British Columbia, and provided the inspiration for a large system of protected areas (Great Bear Rainforest Agreement) where logging in coastal temperate rainforest is severely restricted. 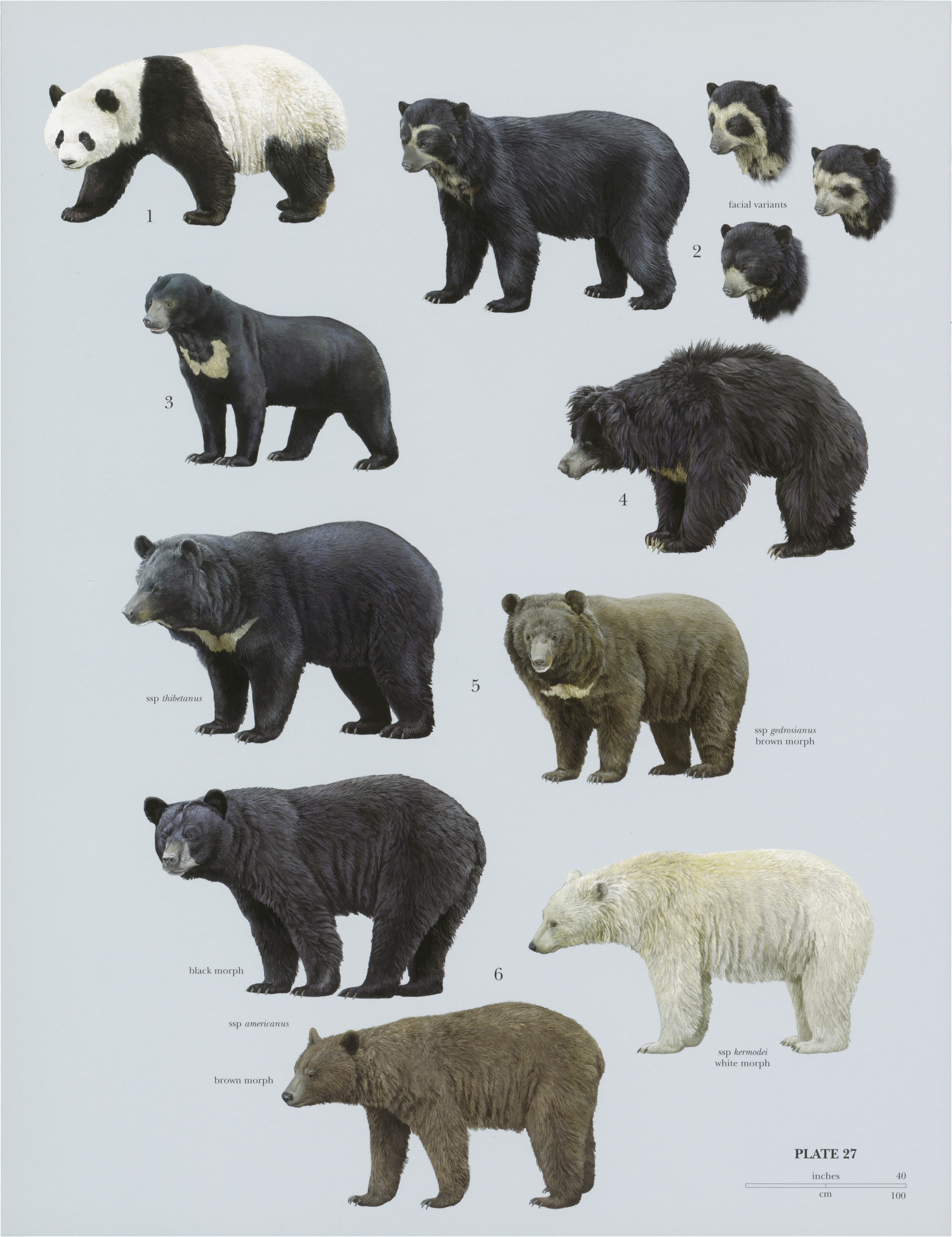 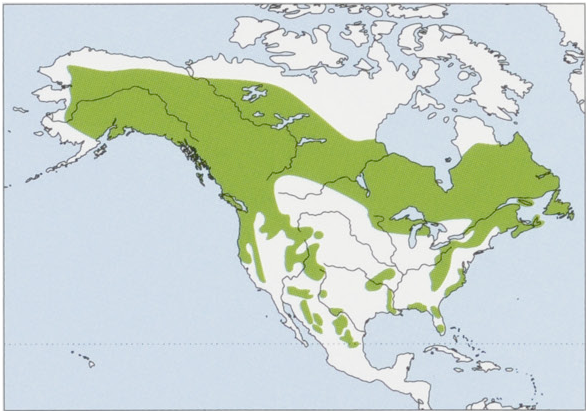