Differential diagnosis. Pogonostoma  (P.) meridionale  is immediately distinguished from other species of the Pogonostoma (P.) elegans  species-group by its ferrugineous setal vesture which is particularly conspicuous on elytra while on the head and pronotum the setae are better obvious in lateral view (only in very old, badly treated specimens the rusty setae fade). The setae in the similar P. (P.) natsuae  sp. nov. are generally paler, blonde to straw-yellow. The aedeagus of P. (P.) meridionale  (in its left lateral aspect, Figs 28, 30View FIGURES 19–32) is notably boomerang-bent. Moreover, the aedeagus clearly differs from that in P. (P.) natsuae  sp. nov. in the shape of its apex, particularly in its ventral (and dorsal) aspect ( Figs 29, 31, 32View FIGURES 19–32). For other differences see “Differential diagnosis” under the new species above.

P. (P.) rivalieri Moravec, 2005 may resemble P. (P.) meridionale  by its black body, subgibbose pronotal disc in its lateral aspect, nearly smooth pronotal posterior lobe, partly reddish-brown mandibles and similar aedeagi. However, P. (P.) rivalieri is immediately distinguished (both from P. (P.) meridionale  and P. (P.) natsuae  sp. nov.) by its elytral sculpture consisting of much larger, deeper and more regular punctures and by the shape of its pronotal disc (particularly in male), which is subquadrate in dorsal view (see Moravec 2005, 2007). Another rather similar species, P. (P.) atrorotundatum W. Horn, 1934, clearly differs in having elytral sculpture consisting of extremely large punctures with thin intervals and its pronotal posterior lobe being punctate-setose.

For other differences from the above-mentioned species and from others of the P. (P.) elegans  species-group see Moravec (2007).

Genae and clypeus as in preceding species.

Mandibles ( Figs 36–37View FIGURES 33–41) with rather short terminal teeth, sexually dimorphic in shape as in preceding species, but generally much paler, dark reddish-brown to conspicuously reddish, or cinnamon-testaceous, except for sharply delimited, black-brown darkened basomedian area.

Legs black (black-brown with mahogany-brown femora in old specimens); coxae rather densely whitish to yel- lowish-setose; profemora covered with rather dense medium-long whitish setae, mesofemora with dense whitish setae anteriorly, metafemora with sparser ochre and dark ferrugineous setae; pro- and mesotibiae with whitish or blonde setae except for dense, ochre-ferrugineous setae on apices of tibiae, tarsi dark reddish-brown their surface with whitish setae (as in all species, first three protarsomeres in male dilated and with pad of setae), claws rustybrown.

Distribution and biology ( Fig. 52View FIGURE 52). Pogonostoma  (P.) meridionale  is phytogeographically separated from P. (P.) natsuae  sp. nov. It inhabits the southernmost areas of Madagascar, and the label data of the above-listed specimens are in accordance with the distribution mentioned by Jeannel (1946), Horn (1934), Olsoufieff (1934) and Moravec (2007); only the localities confirmed by the examined specimens are marked in the simplified map of distribution ( Fig. 52View FIGURE 52). P. (P.) meridionale  may occur in different forest formations which in the wide area vary from the southernmost corner of the evergreen forest on the east coastal area near Tolagnaro, to the deciduous dried southern-inland and coastal forests and scrublands with prevailingly Euphorbia  and Didiereaceae  forests scattered west from Tolagnaro to Behara, Androy, Ambovombe, Ampasimpolaka and Imanombo. The type locality Fort Dauphin (now Tolagnaro) is not exactly specified and may represent different forest formations. We may speculate that the remnants of the dry and spiny formations originally covered larger areas northwards to Bekily and far westwards towards Toliara, also when the type and old historical specimens were caught. The male (CCJM), captured rather recently 24 km west of Fort Dauphin, might have been taken in either biotope. Many historical specimens come from Bekily, Behara, Ampasimpolaka in the Mandrar Basin and Andrahomana–Ambovombe. The localities Vall d’ Ambolo and Andrahomana are probably with remnants of evergreen eastern forest, while westwards localities around Ampasimpolaka are (or were) probably with prevailing scrublands. The label “Annanarivo of one male (SDEI) evidently means Madagascar (often labelled as such by historical insect dealers).

P. (P.) meridionale  is now a rare species, known prevailingly from only old historical specimens. Apart from the above-mentioned recently caught male 24 km west of Tolagnaro, it was reported by Cassola & Violani (1992) from Berenty, which is a private natural reserve primarily focusing on the preservation and research of six species of lemurs. Hypothetically, this species has a chance to survive in the gallery forest of tamarind trees along the Man- draré River, and semi-arid spiny forest and scrubs in this small, but well-protected natural preserve.

Remarks. The shape of the aedeagus (previously illustrated by Moravec 2007), and its consistent difference from that in P. (P.) natsuae  sp. nov. has been confirmed within this present revision.

Due to the dense elytral punctures, Rivalier (1970) placed P. (P.) meridionale  in his “groupe meridionale  ” together with diagnostically very different Pogonostoma (Transstenocera) sikorai W. Horn, 1934  , which inhabits evergreen forests of the northeastern and central-eastern areas of the island. Therefore, P. (P.) meridionale  has been maintained in the P. (P.) elegans  species-group (sensu Moravec 2007) as classified by Jeannel (1946). 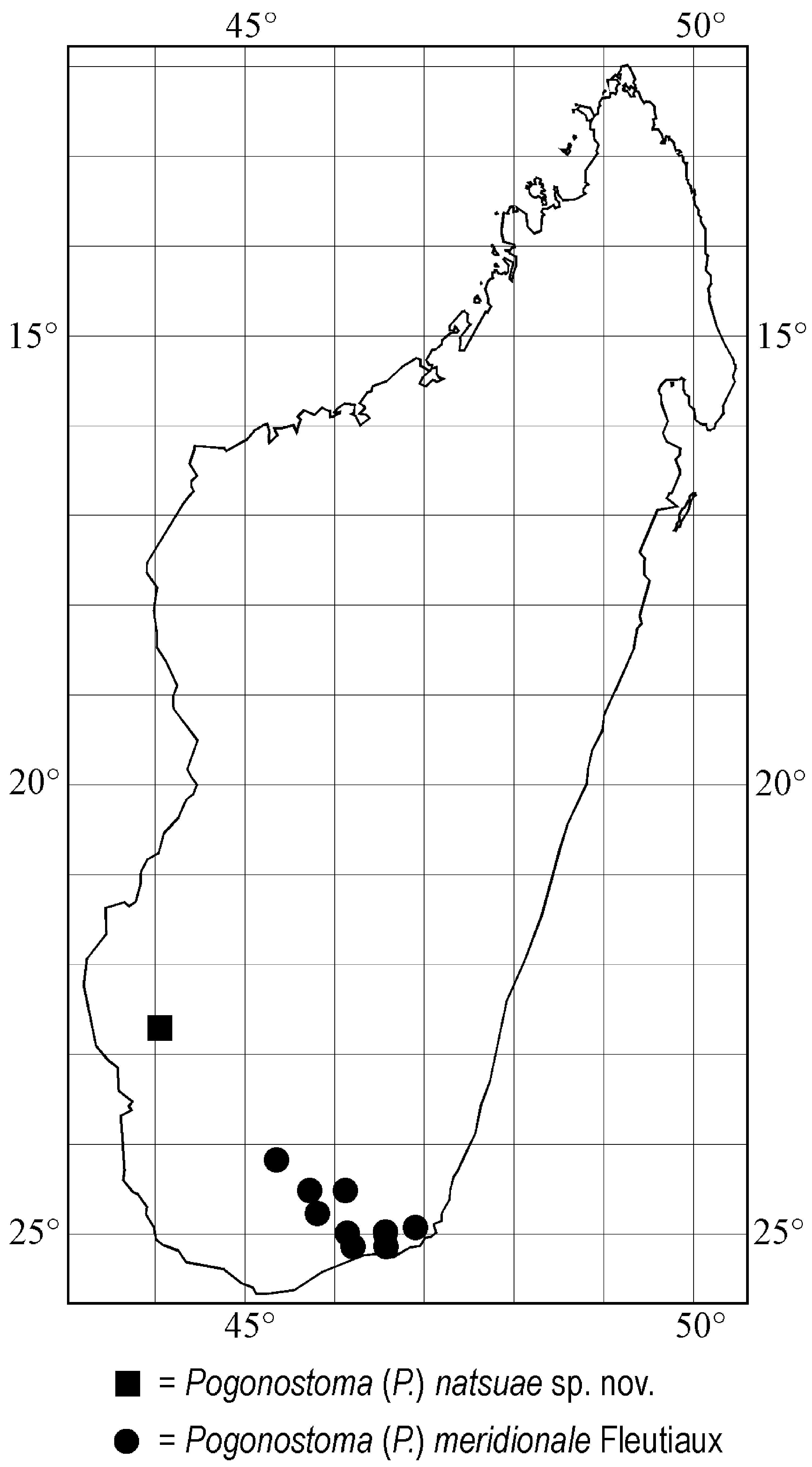 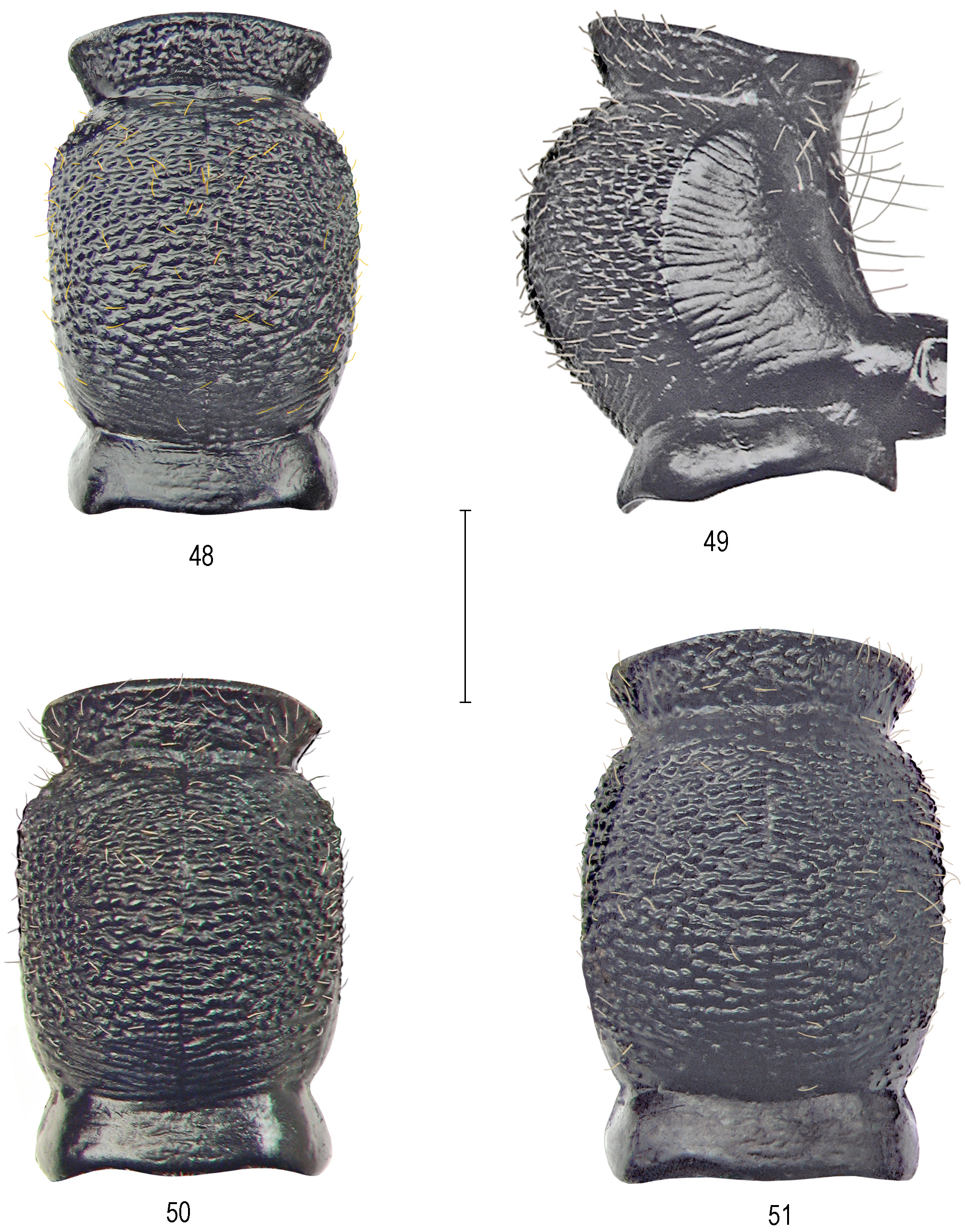