Food and Feeding. The diet ofthis glider consists primarily of insects, arthropods, and exudates, including sap from trees, lerps, manna, honeydew, and nectar and pollen, the proportion of each varying among different locations. Insects are often caught while the glideris foraging through peeling bark. When sap-feeding,it uses its lower incisors to gouge into a Eucalyptus , Corymbia (both Myrtaceae ), or sometimes Acacia ( Fabaceae ) tree (referred to as sap-site trees), after which the sap can continue to flow and be eaten by the gliders for several decades. The incisions made form a V-shape that is typically c¢.12 cm long and has an angle of approximately 100°; they are cut through the outer bark, inner bark, and cambium layers of the trunk and form a neat channel typically 5-10 mm wide and 4-10 mm deep,just touching the sapwood, which is not incised. The incised trees typically have a minimum diameter at breast height greater than 40 cm. Some tree species extensively used at one location may be completely ignored at another. Tree sap is particularly important at extremes of the range, including north Queensland and western Victoria, as it accounts for more than 80% of the diet. In other parts of the glider’s distribution sap constitutes ¢.30% of the diet. Typically, only one or two species of tree are used at a particularsite, even though five or six may be available, and fewer than 1% of possible trees are incised for sap at any one location. Individuals also use fewer than ten trees of a particular species and on average use only two trees at a time, of which they choose a single one and feed on sap for the whole night. In north Queensland, only one tree species, the red mahogany ( Eucalyptus resinifera), is used. Variation in sap flow appears to occur independently of rainfall or microhabitat where the tree is located. Experimental incising oftrees, designed to mimic the effects of feeding by gliders, have failed to show any effect on sap flow, which suggests that the incidence of sap-feeding is determined by a tree’s pattern of sap flow, and that there may be trees with unusual patterns of sap flow that the gliders select as the most favorable trees to incise. Nectar and pollen are also very important to Yellow-bellied Gliders, particularly in southern New South Wales, where gliders may visit a single flowering tree (possibly all night). The availability of nectar and pollen varies temporally and, at times when few flowering trees are present,gliders may choose trees with fewer flowers than at times when flowering trees are abundant. At other times, when flowering trees are superabundant or scarce, there may be no relationship between the number of flowers in a tree and the duration ofvisits by gliders. In one study, at intermediate levels of abundance, the amount of time that a glider spent in a tree was related to the number of flowers in a tree.

Descriptive notes. Head—body 25-28 cm,tail 35-38 cm; weight 228-332 g. This species can be readily distinguished from the New Guinean Sugar Glider (P. breviceps), which occurs in same area, by its much greater size and predominantly black tail. It differs from the three Australian gliders in its very long, thickly furred, yet not bushytail. Its dorsal fur is pale gray, washed with yellowish brown, especially toward midline of back and on rump.

Habitat. Occurs in primary, mid-montane tropical moist forests, and in rural gar dens close to forest. Found at elevations above 300 m, but thoughtto be rare below 800 m; most are recorded between 800 m and 1200 m.

Food and Feeding. Not much is known of the diet. Specimens have been collected while they were feeding on figs ( Ficus , Moraceae ), and captive animals have thrived on guavas, bananas, and Syzygium ( Myrtaceae ) fruit.

Breeding. Little is known about the reproduction of the Northern Glider. A lactating female was collected in March; another female was carrying a pouch young that was just acquiring fur on the head and weighed 6-5 g.

Movements, Home range and Social organization. The ecology of this petaurid has not been studied well to date, but some anecdotal observations exist. Three adult males and two adult females were found in a hollow, which had been enlarged by chewing, in an isolated senescent tree (known locally as “diri”). Captive individuals have been heard to make a series of loud growls and shrieks.

Status and Conservation. Classified as Critically Endangered on The IUCN Red Last. This New Guinean species is known only from Mount Somoro and nearby areas in the Torricelli Mountains. Its extent of occurrence is limited, covering less than 100 km?, and because all individuals are in a single location, because the extent and quality of its habitat are continuing to decline owing to heavy deforestation and conversion to gardens, and because it is hunted for food, it is considered to be at the highest risk. Only seven animals have been captured in the last 20 years. In the future the Northern Glider may be found to occur in the poorly surveyed North Coastal Ranges of Papua, which comprise a section of mountain range c.100 km in length and a few tens of kilometers wide, from at least Fas 2 Village (to the east of Mount Menawa) in the west to Mount Sapua in the east. For the present, however,it is essential that it be afforded protection in conservation areas. 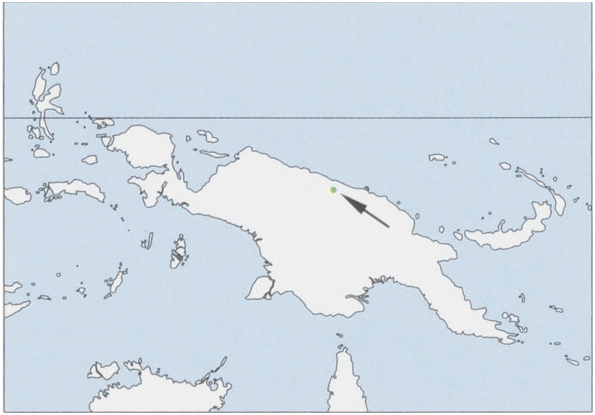