Within this species as presently constituted, molecular studies have discovered two divergent mtDNA clades the distribution of which does notin the least correspond to morphologically described taxa. Further, the distinctiveness of the Tasmanian population needs to be assessed to confirm whether it was introduced into Tasmania, as is generally accepted, or occurred there naturally. Taxonomic work is required in order to determine species limits, as P. breviceps, given its broad distribution, may in fact represent a species complex.

Descriptive notes. Head-body 16-21 cm, tail 16.5-21 cm; weight 68-160 g (males) and 60-135 g (females). This species is highly variable in size and color throughout its range. In Australia it conforms to Bergmann’s Rule: animals from more tropical regions are smaller in size than those from temperate regions. Ventral fur varies from pale creamy to medium gray and may be tinged with yellow, but is never pure white or creamy white, as base of fur is gray. Tail is furred evenly, dusky gray, darkening to black distally. Northern subspecies are smaller and have shorter fur than the nominate subspecies. One of the smallest species of Petaurus , it is usually recognized by its small size and often its white tail tip (which ¢.20-50% of individuals possess). It can be hard to distinguish from the Squirrel Glider (P. norfolcensis), but is typically identified byits smaller body size, shorter blunter face, shorter and more oval ears, less bushy tail at base, gray base of ventral fur, and frequently white tip of tail.

Habitat. In New Guinea this glider inhabits most forest types, from floodplain-forest to savanna woodland and to lower montane forest, and even secondary regrowth in disused garden areas; absent from highest montane areas. Habitat preferences in Australia are broad and include rainforests, moist eucalypt forests, dry eucalypt forests, and woodlands; some authors suggest that optimum habitat is tall open eucalypt forest or woodland. The species’ occurrence is often associated with various species of Acacia ( Fabaceae ) and Banksia ( Proteaceae ). Found from sea level to 3000 m elevation. The Sugar Glider is sympatric with nearly all other Petaurus species, in Australia including the Yellow-bellied Glider (P. australis), the Mahogany Glider (P. gracilis), and the Squirrel Glider, and in New Guinea the Northern Glider (P. abidi) in North Coastal Ranges.

Food and Feeding. Observations of this species’ foraging in New Guinea suggest that its diet includes the fruits of figs ( Ficus , Moraceae ) and pitpit ( Saccharum , Poaceae ), and beetle larvae. In Australia, diet is known to consist of plant exudates, including wattle gum from Acacia , Eucalyptus ( Myrtaceae ) sap, and Eucalyptus and Banksia nectar and pollen. Invertebrate food items include insects such as beetles, moths, and weevils, and arachnids such as spiders. Research on the nitrogen requirements of free-living adult Sugar Gliders suggests that males can satisfy these requirements on a diet of plant exudates, including saps, gums, and nectar, but females may need to harvest pollen and/or insects to meet additional requirements of reproduction. As with Squirrel Gliders, there are records of Sugar Gliders eating vertebrates, including preying upon swift parrots (Lathamus discolor) in Tasmania by killing the incubating females in tree hollows, and also eating chicks and eggs.

Breeding. Northern Australian populations appear not to have a clear breeding season, though there is a peak in the late dry—early wet season; southern populations evidently have a single breeding season, beginning in winter or early spring each year. The litter size is one or two, with an average of 1:6-1-8, and females are able to reproduce more than once per year. The young remain in the pouch for ¢.70 days, at which time they are deposited in a group nest for a further 40-50 days; when they are 110-120 days old they begin to forage for themselves in the company of the mother. At approximately 7-10 months of age the young are typically displaced from their maternal group and will travel large distances, even across open pasture, to reach isolated habitat. The mating system is generally polygynous. The gliders nest in leaflined hollows of trees, in nesting communities that consist of up to six adult males and females and their young; one or two dominant males (usually older individuals) maintain the territory against other groups. Density estimates range from 0-23 ind/ ha to 6-1 ind/ha. Male parental care has been reported for Sugar Gliders living in captivity, but few details are available. A study of wild individuals that were using a nestbox reported that an adult male remained in the box for several hours while the female was away from the box; petaurids are unable to maintain a stable body temperature until 100 days of age, which could restrict the mother to short bouts of foraging, and the male’s remaining in the box presumably gave the mother more time to forage. It is possible that individuals other than the adult male, including siblings, provide care by huddling with the young to maintain body temperature. Direct male care of offspring may be widespread within the petaurid marsupials, but requires further study.

Activity patterns. Like the other petaurid gliders, this species is typically nocturnal, but animals in poor condition have been seen foraging during the day. On cold and rainy nights activity can be substantially reduced, and to minimize energy loss during adverse weather Sugar Gliders can employ daily torpor regularly. Torpor bouts last between two and 23 hours (average 13 hours), during which time the body temperature falls to a minimum of 10-4°C. The gliders emerge from their dens c.17 minutes after dusk and spend ¢.82% of the night in foraging, during which they travel some 460-544 m.

Movements, Home range and Social organization. Home ranges are typically between 0-5 ha and 4-7 ha in size. Sugar Gliders live in social groups of up to seven adults and their young of the current season, sharing a nest in the hollow of a eucalypt tree. They show little social interaction when not in the nest. The sex ratio of these groups in the wild is generally female-biased, and all females in the group breed; a polygynous mating system has been proposed. Sugar Gliders utilize several calls, including a shrill yapping that warns other individuals of danger, a sharp threatening scream that can occasionally be heard when they fight, and a gurgling chatter when handled or disturbed in the nest.

Status and Conservation. Classified as Least Concern on The IUCN Red List. This species has the widest distribution of any of the marsupial gliders, indeed of any marsupial in the Australasian region. In addition, it has a large population size, occurs in a number of protected areas, and is tolerant of a broad range of habitats, including degraded ones. Its population numbers are probably stable. Within ideal habitat it can be locally common, with 6 ind/ha recorded, but in other areas (such as northern Australia) it has been recorded at much lower densities of less than one animal per hectare. In South Australia it is known only from the south-east, and two records near Adelaide; it is considered rare in that State. In Tasmania, where it is widespread,it is thought to have been introduced. There are no major threats facing this petaurid, although, as with many other species, it is susceptible to bushfires and to habitat clearance for expanding agriculture. 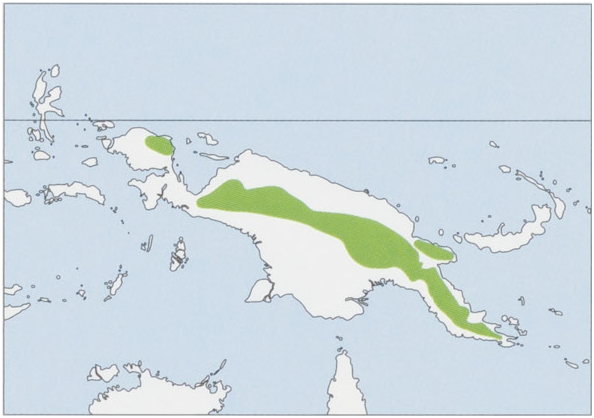