Etymology. The name of this species refers to the historical region of the Middle East, located in eastern Mesopotamia, which is now Iran. The epithet is an adjective.

Diagnosis. Loxosceles persica  n. sp. differs from L. mrazig  and all the endemic Canarian species by the lack of the typical and conspicuous dark “V-mark” located posteriorly on the pars cephalica found in other congenerics. Females of L. persica  n. sp. also differ from those of the Canarian endemics ( Planas & Ribera 2015: Figs. 3View FIGURE 3, 5View FIGURE 5, 7, 9, 11) and L. foutadjalloni  ( Lotz 2012: Fig. 10 B) by their seminal receptacles bifurcated at the apical end ( Fig. 4View FIGURE 4 A, B) (female of L. mrazig  is unknown). L. persica  n. sp. resembles L. rufescens  by lacking the “V-mark” on the pars cephalica and by having the seminal receptacles bifurcated at their apical end ( Duncan et al. 2010: Fig. 3View FIGURE 3), but in L. persica  n. sp. the apical ends shows two longer and cylindrical lobes ( Fig. 4View FIGURE 4 A –B) the internal largest and pointing slightly dorsal, while in L. rufescens  the apical lobes are rounded, the inner one larger and directed towards the centre.

Vulva: as in Fig. 4View FIGURE 4 A –B. Genital opening connects to the base of the seminal receptacles that are conical and wide, laterally reinforced with sclerotized areas. Medial part long, slightly conical and gently directed towards the center. Apical part bifurcated into two cylindrical lobes. Inner lobe long and wide, pointing slightly dorsal. External lobe three times shorter than the inner one, pointing apically or dorsally. Seminal receptacles separated at their closest point by roughly the apical diameter of the external lobes.

Distribution. Endemic to Iran. Known only from three caves of the provinces of Fars, Yazd and Khuzestan ( Fig. 1View FIGURE 1).

Discussion. The new species lives in dried, deserted or xeric regions. The same is true for its sister species L. mrazig  , which is from a deserted area in southern Tunisia. This feature could ecologically segregate this species from L. rufescens  , which is common in the Mediterranean ecosystems. In spiders, delimitation of species boundaries is mostly based on the genitalia. The taxonomy of Loxosceles  is singularly difficult ( Gertsch & Ennik 1983: 272) and in L. persica  n. sp., female genitalia is more informative than the male palpus. This is the main reason that we have chosen the female from Ker Palang Cave as the holotype of this new species.

The phylogenetic relationship of L. persica  n. sp. with L. mrazig  and L. foutadjalloni  is difficult to explain from a biogeographical point of view. As far as we know, there are no historical biogeographic patterns between Guinea, Tunisia and Iran. However, we should consider that the taxonomic knowledge of Loxosceles  is very scarce south of the Atlas Mountain range, where there are only a few old records of L. rufescens  . To the north of Sierra Leone and Guinea, in western Africa, and Ethiopia in eastern Africa, as well as in Central Africa, no species has been described up to the Atlas Mountain range ( Lotz 2012), and there are few, if any, records of L. rufescens ( Nentwig et al. 2017)  . There are no taxonomic reviews of this genus from Libya to Turkey either, and the existing records for those locations are also scarce and old. Quite possibly, this extensive area, unknown from a faunistic point of view as far as the genus Loxosceles  is concerned, can harbor a species diversity currently unknown. The same may be true between Tunisia and Iran, mainly in the desert areas far from the Mediterranean coast.

The three localities where L. persica  n. sp. has been collected are separated by 165 and 450 km in a straight line (K1-KhKh 165 km, K1-Kp 400 km, and Kp-KhKh 450 km). The average evolutionary divergence (p-distance) of cox 1 in the three localities is 16.2% (K1-KhKh 14.7%, K1-Kp 17.1%, and Kp-KhKh 16.9%). These high genetic distances exceed the values found in L. rufescens  from the Mediterranean basin (7.8%, Planas et al. 2014) although lineages living in close proximity (50 km) exhibit a striking genetic divergence (4.7%) (Planas et al. 2014). The genetic diversity existent within and between the Loxosceles  lineages of the Souss-Massa region (southwest of the Atlas range, Morocco) surpassed the already high genetic diversity existent within the L. rufescens  lineages mentioned above. It is a rather abrupt mountainous area with deep torrents geographically separating or isolating the prospected localities. In three localities separated by less than 30 km, the genetic distances calculated with cox1 exceed 7% within each lineage and reach 12.7% between neighboring lineages (C. Ribera pers. observation).

The three Iranian localities where L. persica  n. sp. was collected have similar geographic characteristics. Mountain ranges of a high altitude (Kp Cave 1277 m, K1 Cave 994 m and KhKh Cave 2400 m) separated by steep orographic features of the area, together with the microhabitat preferences, low dispersal abilities of Loxosceles  (the synanthropic L. rufescens  excluded) and considerable distance (165 to 450 km), could have triggered this high genetic diversity.

Moreover, we have only one adult female (with its genitals available), and males were not collected with females. The available three morphologically identical males come from two different localities. We decided to associate both sexes because both show morphological differences from the rest of the species from the Mediterranean area and have the same leg formula (2143). However, using programs for species delimitation methods based on gene sequences is not appropriate for species that show a high population structure, such as the Mediterranean Loxosceles  . In L. rufescens  from the Mediterranean basin, applying GMYC (and using cox1 sequences), we recovered a total of 14 entities (putative species) (Planas et al. 2014). In summary, these patterns can also be found in other spider species with similar dispersal capacities and strong population structure (e.g., mygalomorphs, Satler et al. 2013) and with other Loxosceles  species, such as those from the Canary Islands (Planas & Ribera 2014).

Loxosceles persica  n. sp. has been collected in the shadow zone of three caves; however, it does not show any morphological adaptation to the underground environments. It is a troglophilic species, like the rest of the Mediterranean Loxosceles  spp. It inhabits the first few meters of the caves where there are enough shelter, shade and availability of food. Due to its morphological features, it is very probable that this species is also present outside the caves. 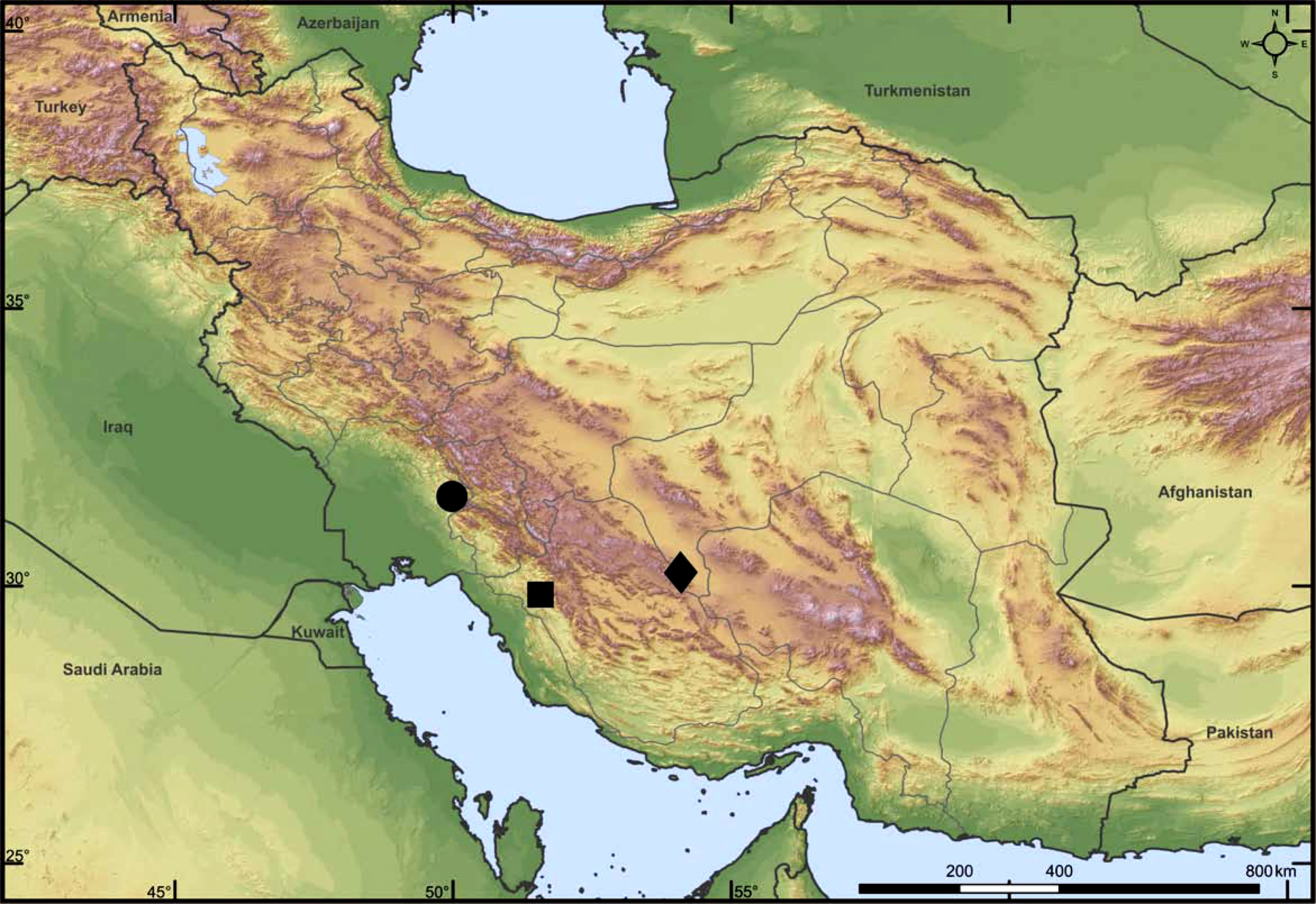 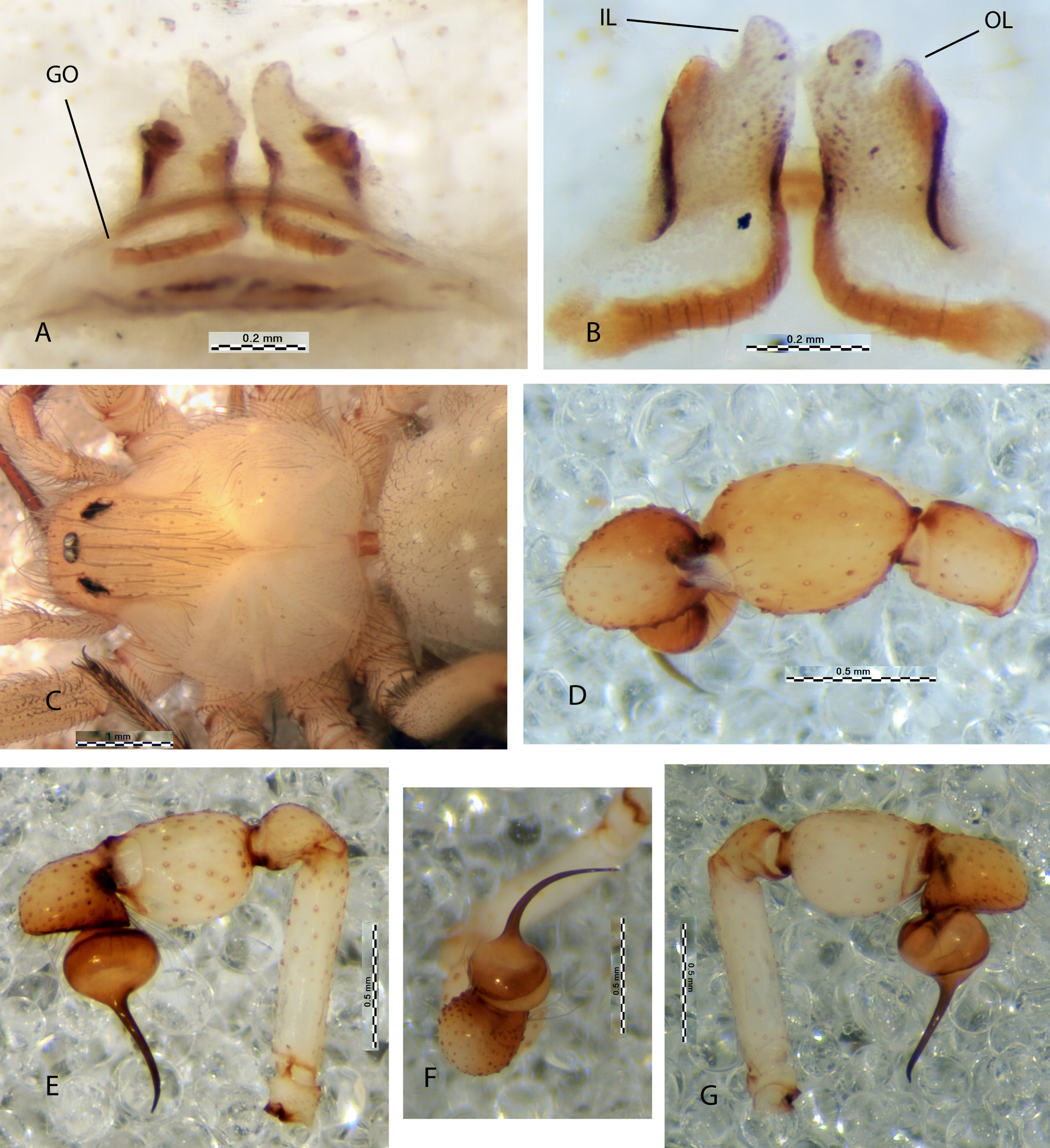