Etymology: The specific name is a noun in apposition and refers to the bright glossy black color of the dorsum, resembling the volcanic rock obsidian.

Distribution: known only from the type-locality.

Sensory organs, epidermis and body musculature. Sensory pits ( Fig. 2View FIGURES 2–8) as simple invaginations (20–30 µm deep) contour anterior tip and occur ventromarginally in one row on each side of the body in the cephalic region (about 7% of the body length).

The creeping sole occupies the whole body width ( Table 1). Three types of glands discharge through whole epidermis of pre-pharyngeal region: rhabditogen glands with xanthophil secretion (ventrally with smaller rhabdites) and cyanophil glands with amorphous secretion, besides scarce xanthophil glands with coarse granular secretion ( Figs. 3, 6View FIGURES 2–8). The glandular margin ( Figs. 3, 4View FIGURES 2–8) is conspicuous after the cephalic region (about 8% of the body length) and receives the openings of two types of glands: xanthophil cells with coarse granular secretion and cyanophil cells with amorphous secretions. Glands discharging through the anterior tip of the body are similar to those of the prepharyngeal region ( Fig. 3View FIGURES 2–8).

Cutaneous musculature with the usual three layers: circular, oblique and longitudinal layers, the latter with thick bundles ( Figs. 5, 6View FIGURES 2–8, Table 2). Cutaneous musculature thinner in the pre-pharyngeal region than in the cephalic region of the body, but gradually diminishing its thickness towards anterior tip. Ventral musculature with similar thickness or slightly thinner than dorsal musculature at the sagittal plane ( Table 2) between four and seven times thicker than the epidermis, becoming progressively thinner toward body margins. Mc:h 7–8% ( Table 2).

Pharynx. The pharynx is cylindrical, about 6% of body length, with folded walls and dorsal insertion posteriorly shifted. The mouth is located in the median third of the pharyngeal pouch ( Fig. 7View FIGURES 2–8). Esophagus absent.

Reproductive organs. The testes are arranged in one irregular row on either side of the body, beneath the dorsal transverse mesenchymal muscles ( Figs. 4, 5View FIGURES 2–8). They begin in the anterior third of the body and extend to near the root of the pharynx. Sperm ducts dorsal to ovovitelline ducts in pre-pharyngeal region ( Fig. 6View FIGURES 2–8). Distally, sperm ducts—forming spermiducal vesicles—enter laterally into the proximal part of the prostatic vesicle ( Figs. 9, 10View FIGURES 9–10). Extrabulbar prostatic vesicle, tubular and unpaired, located near the common muscle coat. The proximal portion is laterally expanded (T-shaped) and slightly dorsally oriented ( Figs. 9–12View FIGURES 9–10View FIGURES 11–12); it is located at about the same distance from the ventral and dorsal epidermis. Its distal portion penetrates the common muscle coat, becoming sinuous, and continues inside the penis papilla as an ejaculatory duct. This duct is almost straight and opens through an expansion at the tip of the penis papilla ( Figs. 9View FIGURES 9–10, 11View FIGURES 11–12). The male atrium is almost unfolded and occupied by the conical, almost symmetric penis papilla, which has a dorsal fold. The dorsal wall of the male atrium receives the openings of abundant cyanophil glands ( Figs. 9–12View FIGURES 9–10View FIGURES 11–12). Histological aspects of the epithelium, musculature and secretions of the prostatic vesicle, penis papilla, ejaculatory duct and male atrium are similar to those of other species of Cratera  .

Comparative discussion. The presence of an expanded ejaculatory cavity at the tip of the penis papilla and cyanophil glands discharging through the roof of the male atrium, as well as other characters, such as dorsal monolobated eyes, support the inclusion of Cratera obsidiana  in the genus Cratera Carbayo et al., 2013  .

The color pattern of C. obsidiana  , homogeneously black, differs from that of C. crioula  and C. joia  as they also have a black dorsum, but with a median light stripe ( Froehlich 1954b, 1956a). It also can be distinguished from C. ochra  , which shows a dorsal yellow-ochre ground color and dispersed grayish or grayish-brown pigmentation constituting two broad dorsal bands ( Rossi et al. 2016). The new species also can be distinguished from C. nigrimarginata  , which has a light-brownish dorsal color bordered by dark margins, and C. aureomaculata  , which shows a yellowish dorsal ground color covered by brownish pigmentation in the cephalic region and blackish pigmentation constituting irregular flecks over the rest of the dorsum ( Rossi & Leal-Zanchet 2017). By having a homogeneously pigmented dorsum, C. obsidiana  can be distinguished from species with striped dorsal surface, such as C. anamariae  , C. viridimaculata  and C. cryptolineata  ( Carbayo & Almeida 2015; Negrete & Brusa 2016; Rossi & Leal-Zanchet 2017). The color pattern of C. hina  , C. picuia  and C. arucuia  is distinguished from that of C. obsidiana  by the presence of a light central band followed on each side by a wide dark band ( Lago-Barcia & Carbayo 2018).

Regarding the copulatory apparatus, C. obsidiana  has a tubular prostatic vesicle with the proximal portion laterally expanded (T-shaped) similar to that of C. steffeni Rossi et al., 2014  and C. ochra  ( Rossi et al. 2014, 2016). In all these three species, the prostatic vesicle is considered to be single, without forked portions, since it just shows a lateral expansion. However, C. obsidiana  has the proximal portion of the prostatic vesicle slightly dorsally oriented, being such an anatomical feature recorded for the first time in the genus Cratera  . 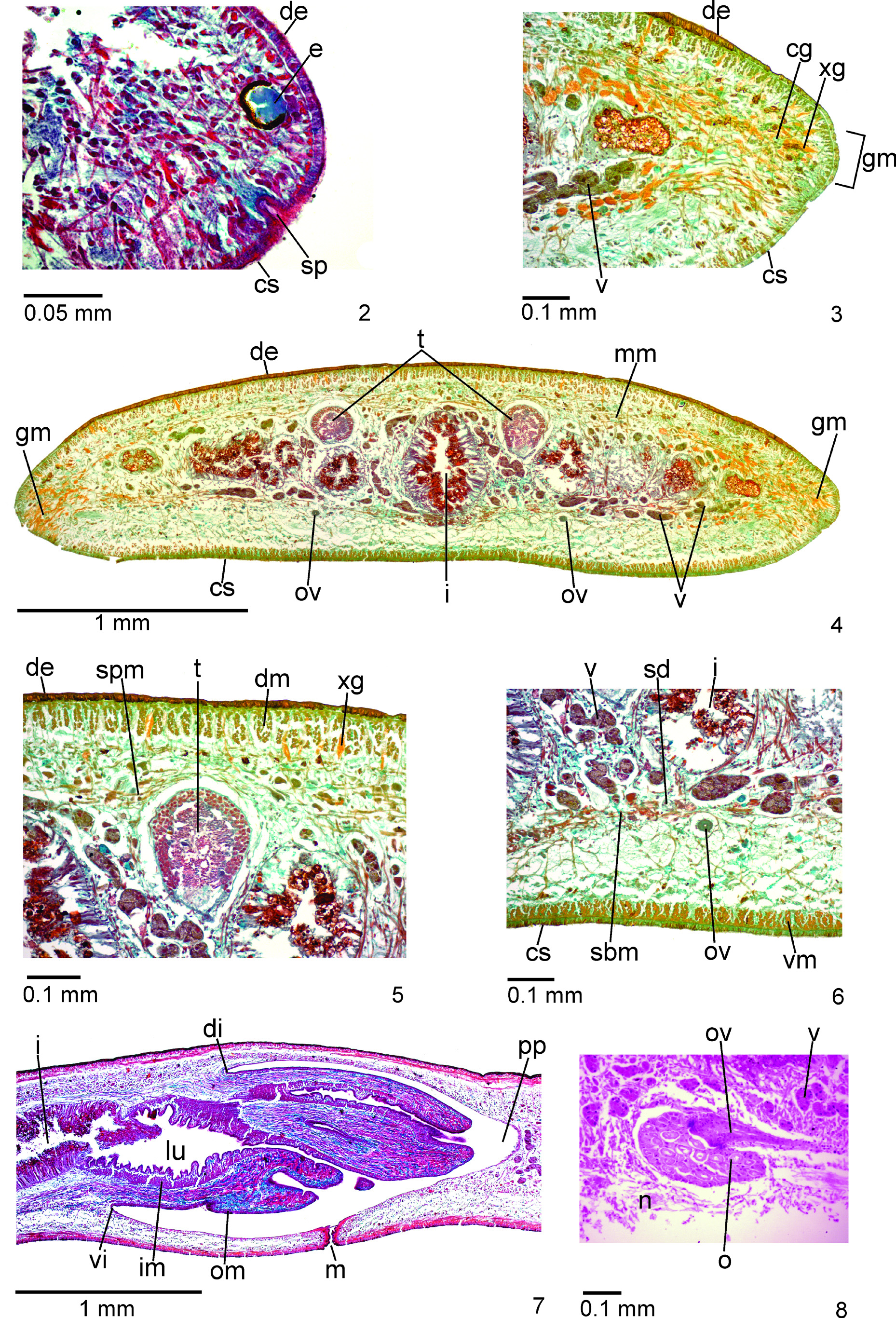 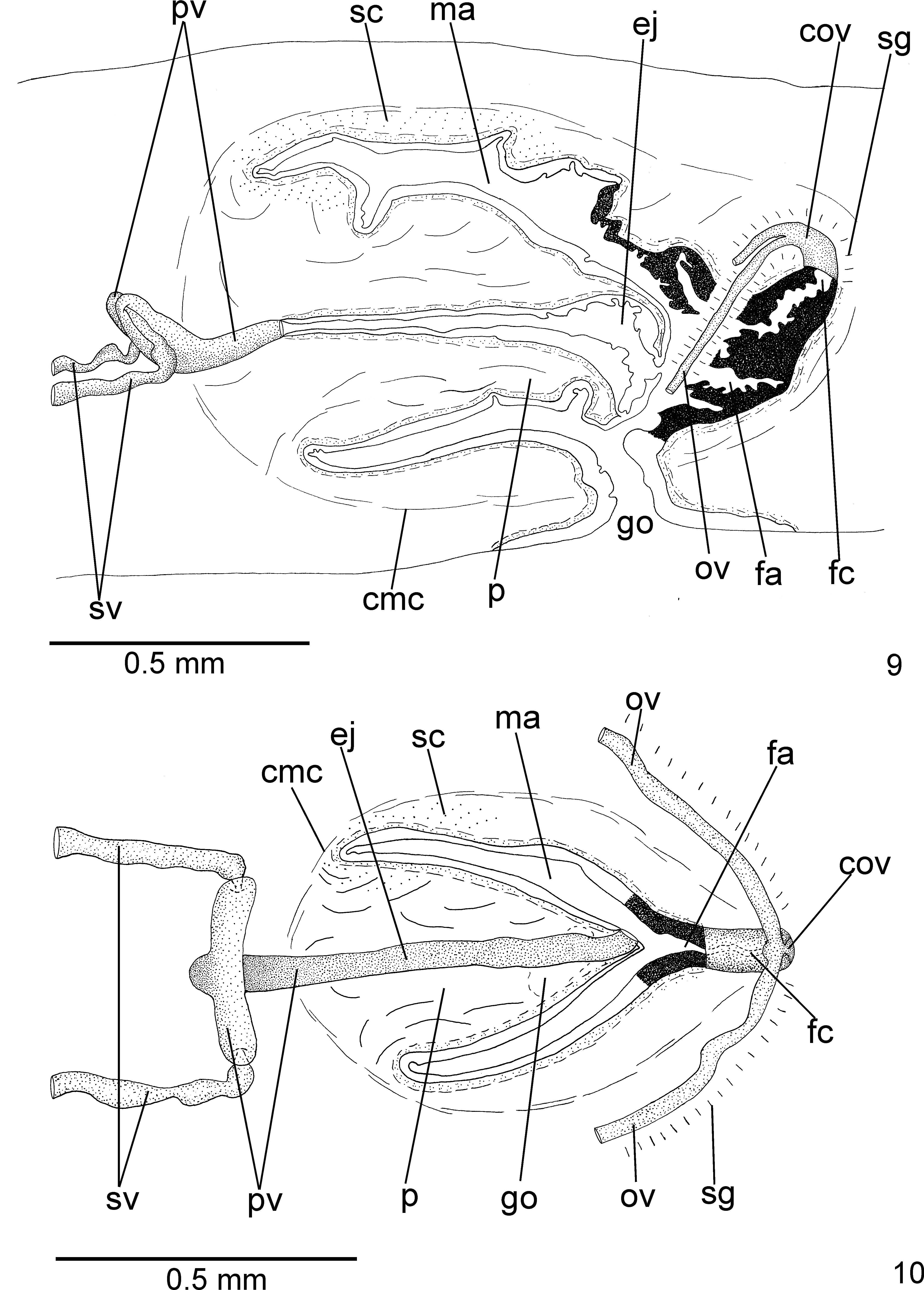