Our circumscription of S. insanum comprises ‘‘ S. melongena group E’’ and ‘‘ S. melongena group F’’ of Daunay et al. [ 23]; this includes those plants considered by them to represent wild progenitors and straggling prostrate forms they considered to be feral ‘‘reversions’’ from cultivated forms. This variation in habit is found in some other species of Solanum such as S. arcanum Peralta , a wild tomato from northern Peru [ 48]. Populations of S. insanum we have seen in southern China often have a mixture of forms; prostrate forms appear to grow in more open areas. Common garden experiments coupled with inter-lifeform crosses are necessary to determine the basis of this habit difference.

Solanum insanum is almost certainly the wild progenitor of the cultivated eggplant and is fully interfertile with it [ 19]. Meyer et al. [ 21] used AFLPs to test the relationships of wild and cultivated landrace eggplants and suggested that all Asian plants they analysed represented a single species (their S. incanum + S. undatum = our S. insanum ) that was possibly of hybrid origin or had crossed repeatedly with local landraces of S. melongena . Regardless of which of these two scenarios is the case, S. melongena is likely to have had its origin(s) from amongst populations of Asian S. insanum , as Meyer et al. [ 21] pointed out. Solanum insanum is used medicinally in south China and is considered distinct from the cultivated S. melongena by local people (pers. obs.). Because S. insanum and cultivated S. melongena are highly interfertile and repeated introgression occurred and is still occurring between wild and cultivated plants individual plants can sometimes be difficult to assign to species unambiguously. In this case we have adapted the method used by Peralta et al. [ 8] for naming plants that were morphologically intermediate between the cultivated tomato ( S. lycopersicum ) and its wild progenitor ( S. pimpinellifolium L.). They [ 8] defined a suite of characters that distinguish each species and an individual specimen having a majority of one set of these is called that species. Table 3 View Table 3 lists the suite of characters we have used for the eggplants; for example, a specimen with several long-styled, 5- merous flowers ( Fig. 1D View Figure 1 ), non-prickly stems and juicy green fruit pulp ( Fig. 1C View Figure 1 ) would be called S. insanum , while a specimen with prickly stems, rounded leaf lobes, one long-styled fascinated flower ( Fig. 1F View Figure 1 ) and large fruit would be called S. melongena . Fruit colour is not a particularly reliable character, as it changes through fruit development (see Fig. 1E View Figure 1 ); S. melongena fruits are eaten when they are unripe, so the various green and purple fruits eventually become yellow or brownish yellow if left to ripen completely.

Hepper and Jaeger [ 45] clearly describe how Linnaeus described S. insanum as distinct from his earlier S. melongena by citing its prickly stems (in addition to calyx) thus indicating he considered S. insanum a new species and not a replacement name for S. melongena as S. sanctum was for S. incanum in [ 49]. It has been suggested that S. insanum was a misprint for S. incanum [ 45] but although it is unfortunate the two names are very similar they are not considered confusable (R. Brummitt, pers. comm.). Meyer et al. [ 21] erroneously considered S. insanum as illegitimate. 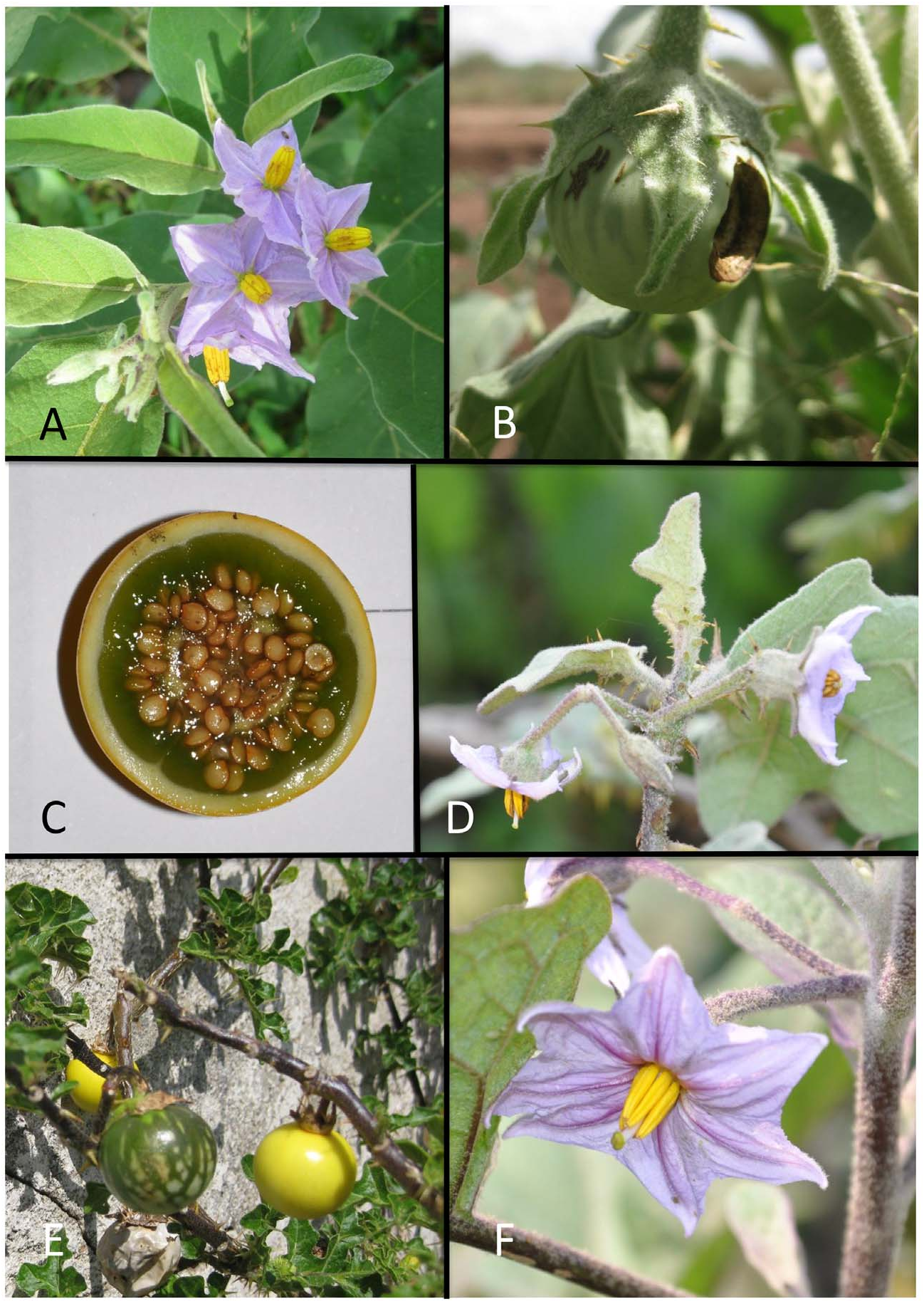